The Consumer Price Index was officially first published in 1921, but at that time, price data was also published going back to 1913. Thus, there's a sense in which a very small group of geeks and wonks are now celebrating the first 100 years of price data. Those who wish to join the our very small party might start by checking the Monthly Labor Review, published by the U.S. Bureau of Labor Statistics, has two articles in the April 2014 issue looking back in time: "One hundred years of price change: the Consumer Price Index and the American inflation experience," and "The first hundred years of the Consumer Price Index: a methodological and political history."

Here, I'll just mention some points that caught my eye from these two articles.  But as a starting point, here's a figure showing the path of annual rates of inflation as measured by the Consumer Price Index during the last century, taken from the third edition of my Principles of Economics textbook that was published earlier this year. You can see the three big inflations: those intertwined with World War I or World War II, and the high peacetime inflation of the 1970s. You can also see the episodes of deflation after World Wars I and II, during the Great Depression, and the recent blip of deflation in the aftermath of the Great Recession. 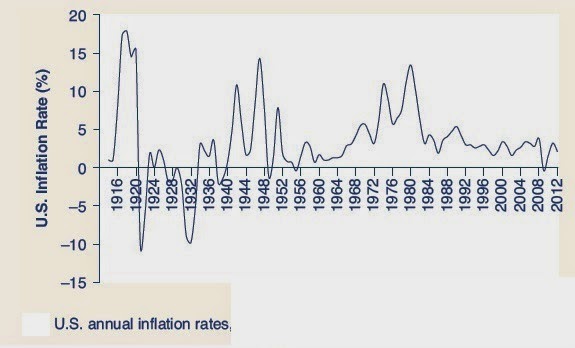 1) Reading the history is an ongoing reminder that price changes have been politically sensitive for a long time, and indeed, that price controls have been fairly common in U.S. experience. As BLS writes: "[A]ctivist policies aimed at directly controlling prices were a regular feature of the nation’s economy until the last few decades." When President Richard Nixon instituted wage and price controls in 1971, there had been price controls "during World War I, the 1930s, World War II, and the Korean war." There had also been episodes, like the New Deal legislation after Great Depression, where the government had attempted to institute price floors to block deflation. Add in the price controls that affected certain sectors for much of the 20th century--airfares, phone service, interest rates paid by banks, public utilities, and others--and the notion that the U.S. economy used to be be a wide-open free market is open to some qualification.

2) There have been various efforts over time to hold down inflation by what became known as "jaw-boning" under President Gerald Ford called "jaw-boning"--that is, telling firms publicly that they shouldn't raise prices, and making a fuss when they did. For example, there were "fair-price committees" established after World War I to monitor if sellers exceeded price guidelines, and thre were also attempts to restrain inflation voluntarily after the Korean war and under President Carter int the late 1970s. But perhaps the best-remembered episode today is President Ford's Whip Inflation Now (WIN) campaign in 1974:

President Ford inherited the difficult inflation situation. In late 1974, he declared inflation to be “public enemy number one.” He solicited inflation-fighting ideas from the public, and his signature “Whip Inflation Now” (WIN) campaign was started. Citizens could receive their WIN button by signing this pledge:

I enlist as an Inflation Fighter and Energy Saver for the duration. I will do the very best I can for America.

An October 1974 newspaper reprints the form containing the pledge. Tellingly, the story next to the form asserts that relief from food prices was unlikely before 1976, while another account details the administration’s efforts to advance price-fixing legislation.46 Buttons were hardly the only WIN product: there were WIN duffel bags (as shown below), WIN earrings, and even a WIN football.

3) Whatever number for price increases was produced by the Bureau of Labor Statistics was often used in labor disputes. Thus, such estimates were always controversial. As BLS writes about labor disputes back in the 1940s, "[M]any were confusing the additional expense of attaining a higher standard of living for an increase in the cost of a fixed standard of living." I'd say that confusion persists today.

4) There has long been a controversy over whether the CPI just looked at prices, or whether it was seeking to capture the broader idea of a "cost of living." In 1940, the Cost of Living Division in the Bureau of Labor Statistics called its index, "Cost of Living of Wage Earners and Lower-Salaried Workers in Large Cities." But there were numerous complaints that this measure only covered price changes, and didn't capture, for example, the fact that during World War II many households had higher expenses from the need to move between homes, pay higher income taxes, and other factors. Ih 1945, the BLS banished the "cost of living" term, and instead renamed the index as the Consumer’s Price Index for Moderate Income Families in Large Cities.”

5) However, soon after adopting the "price index" terminology, economists began to argue in  congressional testimony in the 1950s and the "Stigler Commission" report in 1961 that the conventional process of looking at a basket of goods purchased by consumers and seeing how the total cost of buying that basket of goods over time changed was, perhaps counterintuitively, not accurately measuring how consumers were affected by price changes. The BLS quotes the 1961 Stigler report:


"It is often stated that the Consumer Price Index measures the price changes of a fixed standard of living based on a fixed market basket of goods and services. In a society where there are no new products, no changes in the quality of existing products, no changes in consumer tastes, and no changes in relative prices of goods and services, it is indeed true that the price of a fixed market basket of goods and services will reflect the cost of maintaining (for an individual household or an average family) a constant level of utility. But in the presence of the introduction of new products, and changes in product quality, consumer tastes, and relative prices, it is no longer true that the rigidly fixed market basket approach yields a realistic measure of how consumers are affected by prices. If consumers rearrange their budgets to avoid the purchase of those products whose prices have risen and simultaneously obtain access to equally desirable new, low-priced products, it is quite possible that the cost of maintaining a fixed standard of living has fallen despite the fact that the price of a fixed market basket has risen.

As the BLS notes: "In response to the review’s findings, BLS would abandon the constant-goods conception of a price index and adopt the constant-utility framework as the guiding theoretical perspective in revising future indexes." In other words, the BLS immediately returns to a broader cost-of-living concept, but looked only at how the cost of living was affected by changes in prices and in the types of goods available.
For those who would like a primer on issues surrounding the measurement of inflation in an economy of substitution as prices change, along new and evolving products in the last couple of decades, the Journal of Economic Perspectives has run a couple of symposia on the subject. The Winter 1998 issue has an article from the members of the Boskin Commission, which had published a report on ways to reform the Consumer Price Index, along with six comments. In the Winter 2003 issue, the JEP included another symposium on the CPI, this time leading off with a paper by one author of a National Academy of Sciences report on the topic, with a couple of comments. (Full disclosure: I've worked as Managing Editor of JEP since 1986.)

6) I had not known that what was then called the Bureau of Labor did a fairly detailed study of family expenditures and retail prices well from 1888 to 1890.


"At the time, the federal government was accumulating large budget surpluses, and both Democrats and Republicans identified tariff policy as the preferred tool for reducing the surpluses. ... Congressional Republicans eventually won the debate and passed the Tariff Act of 1890, commonly called the McKinley Tariff, which increased the average tariff level from 38 percent to 49.5 percent. Concerned with the effect that this new tariff law would have on the cost of production in key industrial sectors, Congress requested the Bureau of Labor to conduct studies on wages, prices, and hours of work in the iron and steel, coal, textile, and glass industries. ...From 1888 to 1890, expenditure data were collected from 8,544 families associated with the aforesaid industries. Retail prices were collected on “215 commodities, including 67 food items, in 70 localities,” from May 1889 to September 1891."


7) I had also not known that there was a detailed study on expenditures and prices around 1903.

"After successfully fulfilling special requests for smaller, industry-specific statistical studies for the Congress and the President, the Bureau endeavored to conduct a comprehensive study of the condition of working families throughout the country. A survey of family expenditures from 1901 to 1903 was the first step in constructing a comprehensive index of retail prices. Bureau agents surveyed 25,440 families that were headed by a wage earner or salaried worker earning no more than $1,200 annually in major industrial centers in 33 states; with inclusivity in mind, the Bureau included African American and foreign-born families in its survey. Agents collected 1 year’s data on food, rent, insurance, taxes, books and newspapers, and other personal expenditures. Using data on the income and expenditures of 2,500 families, the Bureau derived expenditure weights, particularly for principal food items, from this study. The second step in the construction of the retail price index was the collection of retail prices on the goods reported in the expenditure survey. The Bureau collected these data from 800 retail merchants in localities which were representative of the data collected in that survey. The prices collected spanned the years from 1890 to 1903. The 3-year study culminated in the publication of a price index called the Relative Retail Price of Food, Weighted According to the Average Family Consumption, 1890 to 1902 (base of 1890–1899), the first weighted retail price index calculated and published by the Bureau of Labor. The index included monthly quotations for the average prices and relative prices (averages weighted by consumption) of 30 principal food items. The Bureau expanded this survey to include 1,000 retail outlets in 40 states, and the index ran through 1907 before ceasing publication."

8) No single price index is ever going to be perfect for all uses So before using a price index, think about how it was constructed and if it's the right tool for your purposes. I was delighted to see that one of the BLS articles ended by quoting a 1998 article from the Journal of Economic Perspectives on this point, by Katharine G. Abraham, John S. Greenlees, and Brent R. Moulton. They wrote:

"It is, in fact, commonplace to observe that there is no single best measure of inflation. It is evident that the expanding number of users of the CPI have objectives and priorities that sometimes can come into conflict. The BLS response to this situation has been to develop a “family of indexes” approach, including experimental measures designed to provide information that furthers assessment of CPI measurement problems, or to focus on certain population subgroups, or to answer different questions from those answered by the CPI. All of these measures are carefully developed but have their own limitations. Those who use the data we produce should recognize these limitations and exercise judgment accordingly concerning whether and how the data ought to be used."

Posted by Timothy Taylor at 2:11 PM