When trying to estimate the extent to which law enforcement efforts reduce crime, there's a standard problem of thinking through cause and effect.  If a neighborhood with a lot of crime gets more police, then a higher number of police will be correlated with higher crime rates--but the crime caused the higher police presence, not the other way around. There are many more traffic police out on New Year's Eve, and also many more drunk drivers, but that doesn't mean that the added police caused additional drunkenness. Ideally, researchers would find an experiment where the police presence was changed randomly, in a way that didn't reflect crime levels, in some places but not others, so that the effect of police could be studied. But random variations in the assignment of police officers, without looking at crime levels, is not a popular policy for politicians to support.

But sometimes an event occurs that offers what researchers call a "natural experiment"--that is, a situation where a variation in police presence occurred for reasons that had nothing to do with crime levels. Gregory DeAngelo and Benjamin Hansen take advantage of such an opportunity to look at how highway traffic patrols, looking for speeders and reckless drivers, affect fatalities in their paper, "Life and Death in the Fast Lane: Police Enforcement and Traffic Fatalities." It appears in the most recent issue of the American Economic Journal: Economic Policy (6:2, pp. 231–257). The AEJ: Policy is not freely available on-line, but many readers will have access through a library subscription. The

Their bottom line: The highway patrol saves lives at a cost of about $309,000 per life. A standard metric among economists, the "value of a statistical life," says that in the United States it is worth taking regulatory or law enforcement actions that reduce the risks of death when the costs of such actions are less than about $9 million per life.

Their story starts in 1997, when the state of Oregon passed a ballot proposition that placed sharp limits on property taxes. The state's public finances suffered, and after a ballot proposition to raise some additional tax revenues failed in 2003,  117 out of 354 full-time roadway troopers were laid off. The number of traffic citations given for speeding or reckless driving on Oregon highways fell by 25 percent.  At about the same time, the speed of Oregon drivers crept up. One measure comes from automated speed counters. Another comes from comparing the average speed someone was travelling when they received a speeding ticket to the posted speed. 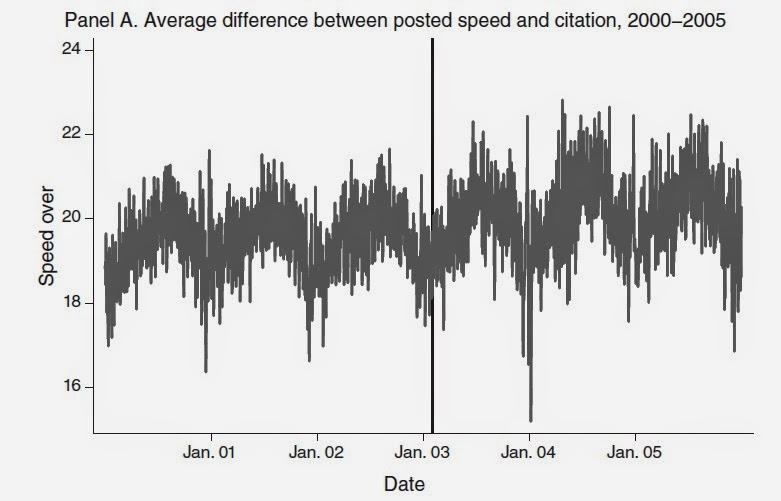 The number of motor vehicle deaths in Oregon rose. Here's a graph showing the number of incapacitating injuries or deaths in Oregon, using monthly data for the three years before and after the reduction in highway troopers. The data varies through the year, with more fatalities and accidents in the summer driving season. But you can see that the peaks get higher when the number of police is reduced. 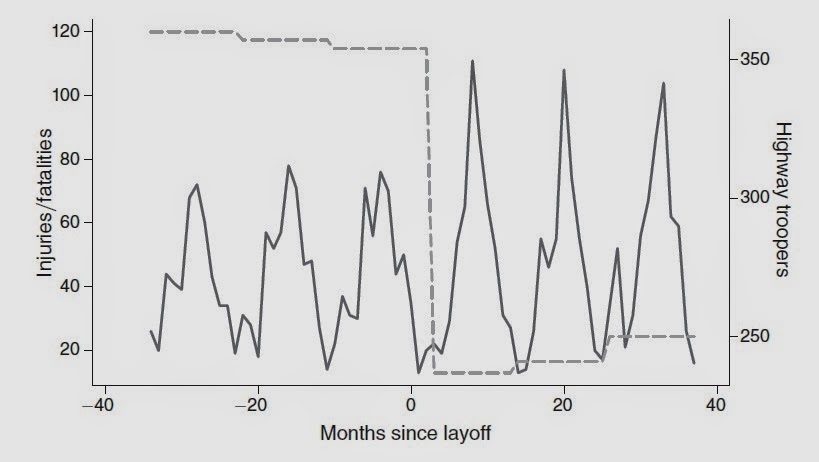 There are various ways to estimate the effects of reducing the highway patrol in Oregon. One can look before and after the change. One can do a comparison with trends in neighboring states, like Washington and Idaho. The authors do these, and also They also generate a "synthetic" control group of states which show similar patterns to Oregon before change; in this case, the synthetic control group turns out to be Idaho, Washington, Nevada, and West Virginia, with differing weights on these states. The exact estimates vary, but looking over a longer period of time, they argue:

"An analysis of the reduction in state police in Oregon since 1979 suggests that there
would have been 2,167 fewer deaths over the 1979–2005 time span if the state police
had maintained their original 1979 staffing levels. Moreover, if the police force were
allowed to grow at the same rate as the increases in VMT [vehicle-miles travelled] (which would amount to a 360 percent increase over actual staffing levels in 2005), then there would have been 5,031 fewer traffic fatalities over 1979–2005."

Of course, one can debate how the Oregon numbers would extrapolate to other states, or whether the benefits of adding more highway patrol officers would be symmetric with the costs of reducing the number. But overall, the US has about 30,000 deaths from motor vehicle accidents each year, plus 1.5 million injuries. A few years ago, the Centers for Disease Control estimated that motor vehicle fatalities cost about $41 billion of medical care and lost work. Of course, this estimate is an underestimate of the total social costs, because it doesn't place any value on the actual lives lost, nor on the suffering and other costs of motor vehicle injuries (as opposed to deaths). It seems very plausible that increasing the numbers of the highway patrol would be a cost-effective way of saving lives.
Posted by Timothy Taylor at 6:00 AM