Here's a snapshot of per capita GDP just published by the World Bank in "Purchasing Power Parities and Real Expenditures of World Economies: Summary of Results and Findings of the 2011 International Comparison Program." I'll say more about how this calculation is done below. But first, consider the overall pattern. The colored vertical slices are countries, ranked in order of their per capita GDP, although only some of the countries are labelled. The horizontal axis shows the share of global population in each country--adding up 100% of global population. The vertical axis shows per capita GDP for that country. Thus, India and China show up as wide countries, reflecting their large populations, but below the world average of $13,460 for per capita GDP. 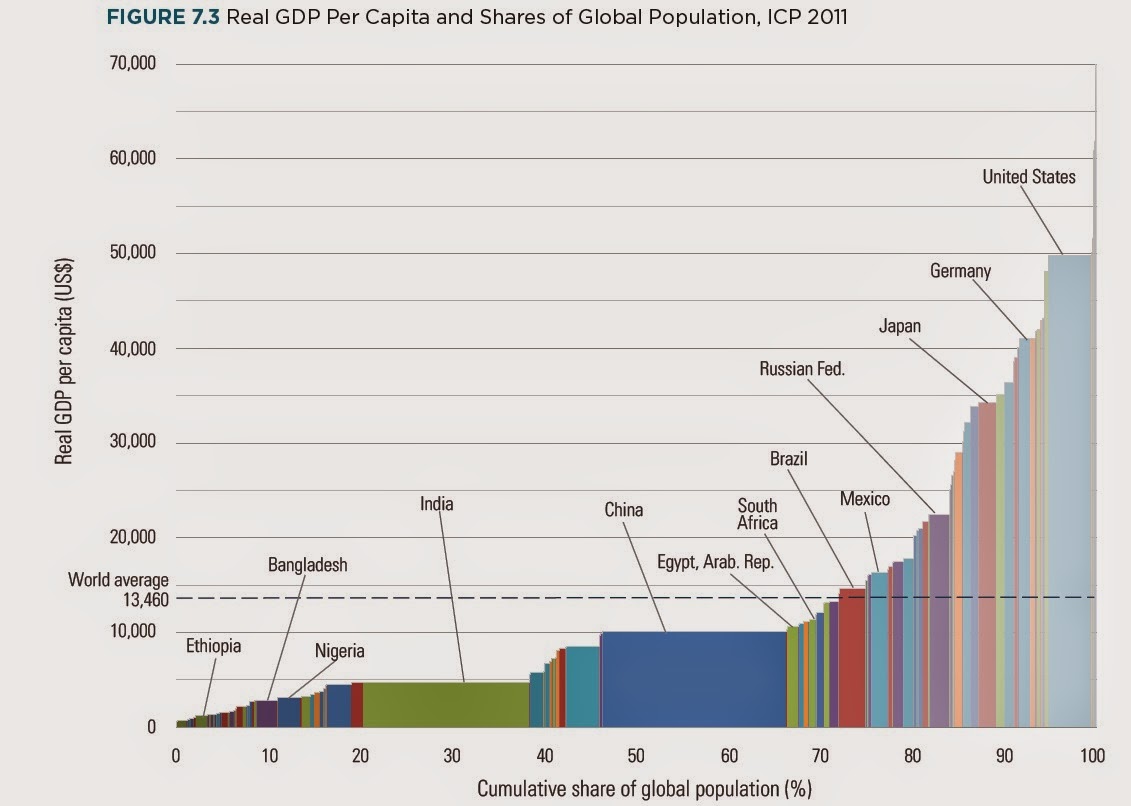 As another viewpoint on this data, consider the 12 largest economies of the world. It's no surprise to see the U.S. and China at the top of the list, but did you know that India is now the third-largest economy in the world, surpassing Japan and Germany? Indeed, six of the 12 largest economies in the world are now "middle-income" countries, shown in boldface type, not high-income countries.  The final column shows the rankings on a per capita basis. By this measure, the U.S. ranks behind a number of tiny economies like Qatar, United Arab Emirates, Luxembourg, and Macao, which have populations so small that they don't show up as vertical bars on the chart above. The middle column, the "exchange-rate based" measure, will be discussed below. 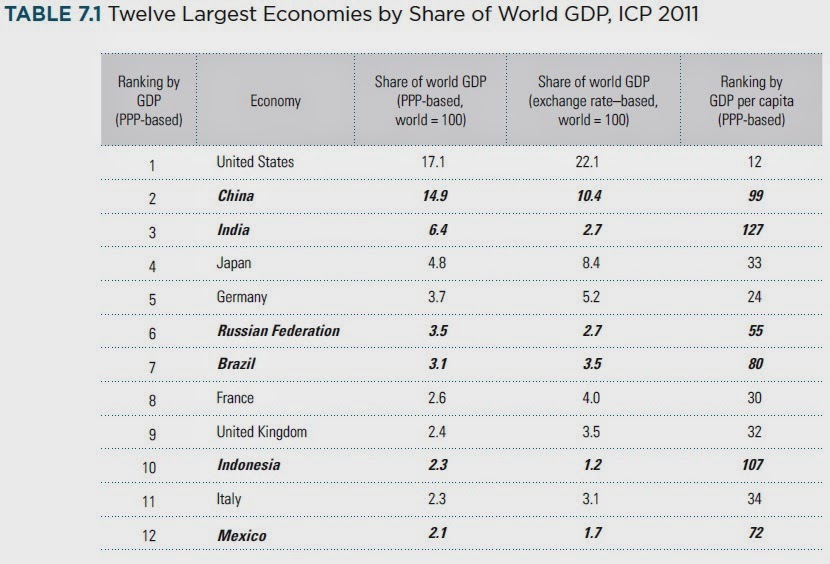 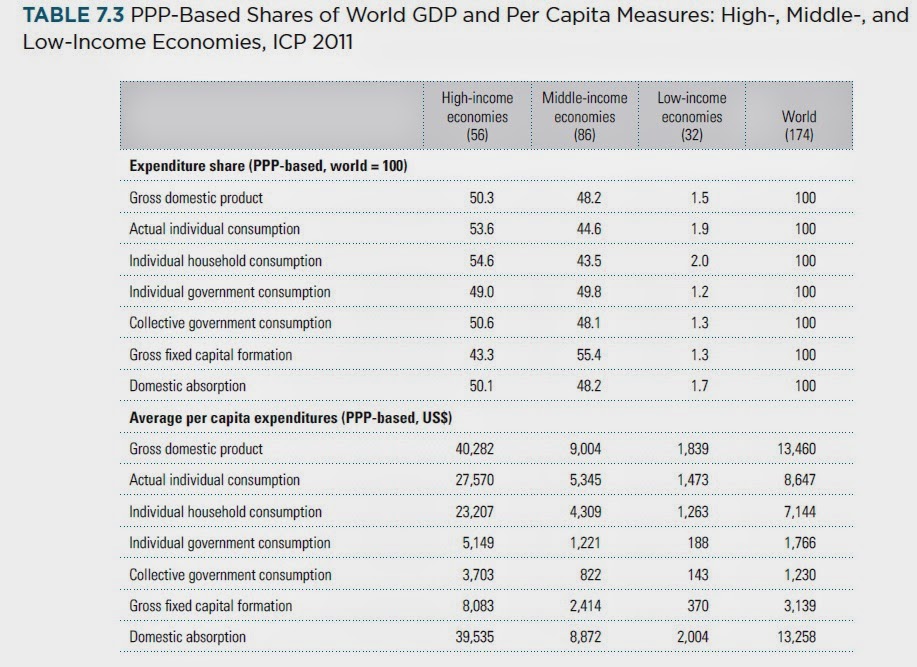 How are these kinds of calculations carried out? To compare the size of national economies, each of which is measured in its own home currency, you need an exchange rate. One obvious option is to use the market exchange rate, but there are two substantial difficulties with this approach.

One difficulty is that exchange rates can move quite a bit over a few months or a year. For example, a euro was was  worth $1.46 in May 2011, $1.21 in July 2012, and $1.35 in February 2013. If you converted the GDP of the euro-zone into US dollars using the market exchange rate, it would have looked as if the euro-zone GDP had a depression-style nosedive during the year that the value of the euro fell, and then had an epic boom in the six months as the value of the euro rose. But that conclusion would have been wrong, because was based on the fluctuating market-based foreign exchange rate, not on actual changes in what was being produced and consumed in the euro-zone economy. Of course, even more severe movements in market exchange rates--like the value of the Argentinian peso falling from $0.25 in early 2011 to about $0.12 now--would be even more misleading if used to draw conclusions about changes in actual GDP.

The other difficulty is that what it costs to buy a certain item in a high-income economy like the United States may be quite a bit different--and often higher--than what it costs to buy the same item in a low-income country. As a result, income in a low-income country can often buy more,which makes comparisons to income in high-income countries treacherous. This is why in the middle column of the table above, the share of of middle-income economies in the global economy looks so much smaller when calculated using market exchange rates.

To overcome the problems with using market-based exchange rates, a common approach since the 1970s has been to used "purchasing power parity" exchange rates determined by the International Comparison Project, which is now part of the World Bank. A PPP exchange rate is based on an effort to figure out the "purchasing power" of a currency in terms of what that currency can buy. Calculating the PPP exchange rate is now done once every six years, because it is  an enormous project, involving the collection of a wide range of price data in 199 different countries, trying to adjust for differences in quality, and then compiling it all into comparable price indexes. The just-released report is based on data for 2001. The report explains:

PPPs are calculated in stages: first for individual goods and services, then for groups of products, and finally for each of the various levels of aggregation up to GDP. PPPs continue to be price relatives whether they refer to a product group, to an aggregation level, or to GDP. In moving up the aggregation hierarchy, the price relatives refer to increasingly complex assortments of goods and services. Thus, if the PPP for GDP between France and the United States is €0.95 to the dollar, it can be inferred that for every dollar spent on GDP in the United States, €0.95 would have to be spent in France to purchase the same volume of goods and services. Purchasing the same volume of goods and services does not mean that the baskets of goods and services purchased in both economies will be identical. The composition of the baskets will vary between economies and reflect differences in tastes, cultures, climates, price structures, product availability, and income levels, but both baskets will, in principle, provide equivalent satisfaction or utility."

Clearly, these PPP exchange rates for 199 economies have a healthy dose of arbitrariness and judgement. Indeed, in 2010 Angus Deaton devoted his Presidential Address to the American Economic Association (freely available on-line here) to detailing the "weak theoretical and empirical foundations" of such  measurements. To some extent, such problems may be unavoidable: it's surely a Herculean task to calculate and defend a single monetary measure that can compare average standard of living in, say, the United States, Japan, China, India, Brazil, Indonesia, Egypt and Nigeria, along with more than 100 other countries. But the undoubted imperfections of economic statistics don't make such statistics meaningless. It only means they should be interpreted with a skeptical recognition that they are estimates that can have substantial margins of error.