One of the standard arguments as to why the U.S. and other high-income countries should support trade with low-income countries and foreign aid to those countries is that it would reduce the pressures for emigrants to leave those countries. For example, during the arguments over the North American Free Trade Agreement (NAFTA) between the United States, Canada, and Mexico, it was common to hear supporters argue that if the U.S. wasn't willing to import goods from Mexico, it would end up importing immigrants instead. Similar arguments have been made that western European countries should support trade and aid to Africa and Asia, so that pressure for immigration flows to Europe would be reduced.

But do the facts support this arguement? In the Center for Global Development Working Paper 359 (March 2014), Michael Clemens asks "Does Development Reduce  Migration?" He argues that the evidence supports a "migration transition," in which economic growth actually stimulates emigration from a low-income country until it reaches upper-middle income levels--and only leads to less immigration at that point. Clemens writes:

"In short, the best-available data show an unmistakable inverted-U pattern across countries in the relationship between overall economic development and emigration. The data offer no sign that among low-income or lower-middle-income countries, rising incomes are associated with smaller emigrant stocks or lower net emigration rates. To the contrary, typical countries in this group show a positive, significant association between average incomes and emigration. The relationship changes markedly somewhere around PPP$6,000–8,000. Among countries above this level of income—upper-middle-income countries or richer—higher incomes are associated with reduced emigration. But even the very richest countries do not systematically exhibit lower emigration rates than the poorest countries."

Here's one of the pieces of evidence behind that claim. The graph is based on plotting data by country. The horizontal axis shows per capita GDP for each country; the vertical axis shows the percentage of the population of that country which has emigrated. The graph shows curves fitted through this data for 1990, 2000, and 2010. The common pattern is that emigration is lower for the lowest-income and highest-income countries, and higher for middle-income countries. 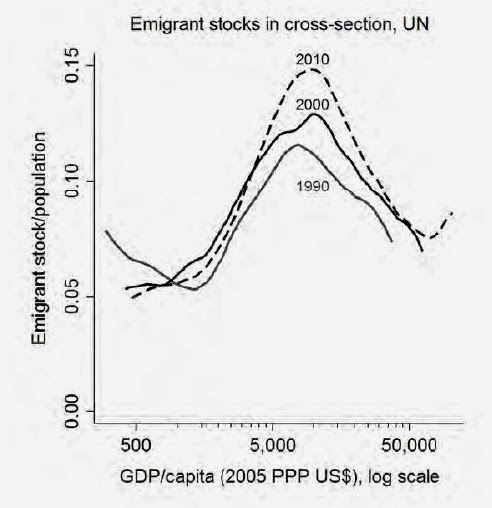 But as researchers seek to disentangle the underlying rationale behind the migration transition, the assumption that economic development in low-income countries will reduce migration doesn't seem likely to hold up well. After all, economic development in China and India in recent decades doesn't seem to have reduced emigration from those countries--even if a number of those emigrants eventually head back to their home countries. At least for the next few decades, the future of the globalizing economy may also be a future of ever-evolving pressures for rising migration levels.