As a starting point, the fundamental purpose of copyright is not to help authors gain a reward in the market. The fundamental purpose is to advance science and the arts, which means encouraging others to build on pre-existing work. For this purpose, copyright protection must strike a balance between protecting the ability of authors to earn a reward, on one side, but also assuring that what they have created enters into the public domain so that it can be used by others, on the other side

Here's the purpose of copyright according to the U.S. Supreme Court (Feist Publications Inc. vs. Rural Telephone Service Co., 499 US 340 [1991], citations omitted): "It may seem unfair that much of the fruit of the compiler's labor may be used by others without compensation. As Justice Brennan has correctly observed, however, this is not "some unforeseen byproduct of a statutory scheme." . . . It is, rather, "the essence of copyright" . . . and a constitutional requirement. The primary objective of copyright is not to reward the labor of authors, but "[t]o promote the Progress of Science and useful Arts." Art. I, § 8, cl. 8. . . .To this end, copyright assures authors the right to their original expression, but encourages others to build freely upon the ideas and information conveyed by a work." Just to be clear, the quoted passage about "the Progress of Science and useful Arts" is from Art. I, § 8, cl. 8 of the U.S. Constitution.

That original U.S. statute created a 14-year term, with the option of a 14-year extension if the author was still alive. Until 1976, the average copyright term was 32.2 years. Today, the U.S. copyright term is the life of the author, plus 70 years. By contrast, patent terms have changed very little. Today’s term for utility patents is either 17 years from patent issuance or 20 years from patent filing, whichever is longer. (The term for design patents, which resemble copyrights in some key respects, is still the original 14 years.) As legal historian Edward Walterscheid puts it,  while patents and copyrights were included in the same clause of the Constitution and originally had the same or similar durations, the patent term has increased by just 43 percent while the copyright term has increased by almost 580 percent. Congress must justify why a 20-year term can provide sufficient incentive to inventors, but not to writers and artists.

There's a lot of history and law about why this has happened: for even more detail than this article, you can look at Khanna's articles in the Cardozo Arts and Entertainment Law Journal here and here. Here, I just want to focus on the some of the peculiar results from this large and fairly recent extension of copyright--basically, a lot of stuff that would have gone off copyright in the last few decades is now still covered, and trying to figure out what is still covered by copyright from a few decades back can be quite difficult. Here are some examples lifted from Khanna's essay (with footnotes omitted for readability).

The "Happy Birthday to You" example

"As one clear illustration of the costs of extremely long copyright, Warner/Chappell claims a copyright to “Happy Birthday to You,” which the Guinness World Records book calls the most famous song in the English language. Due to the copyright claim, every time someone wants to use a portion of this song in a video or performance, they have to pay a license fee or risk being sued. The Warner/Chappell claim is based upon a published version of piano arrangements from 1935. The authenticity of the claim is under dispute, with some arguing that the song was written earlier and by someone else. Robert Brauneis of George Washington University Law School has argued pretty persuasively that Warner/Chappel does not own a lawful copyright to this song. But while the court tries to sort this out, people will have to pay rents to Warner/Chappel to publicly perform the most famous song in the English language. This discourages some people from performing this song publicly. Restaurants such as Applebee’s and Shoney’s have developed songs that are used instead of “Happy Birthday to You” to avoid copyright infringement and avoid paying hefty royalties. . . .So far, they have collected an estimated more than $2 million annually in licensing fees for the song. According to one estimate, it is the song that earns the highest royalty rates. Under current law, “Happy Birthday to You” will remain under copyright until 2030, but we should expect a push to continue to expand copyright even further beyond 2030."

Excessively long copyright terms help explain why Martin Luther King’s “I Have a Dream” speech is rarely shown on television, and specifically why it is almost never shown in its entirety in any other form. In 1999, CBS was sued for using portions of the speech in a documentary. It lost on appeal before the 11th Circuit. If copyright terms were shorter than 50 years, then those clips would be available for anyone to show on television, in a documentary or to students. When historical clips are in the public domain, learning flourishes. Martin Luther King did not need the promise of copyright protection for “life+70” to motivate him to write the “I Have a Dream” speech. (Among other reasons, because the term length was much shorter at the time.) ...

Eyes on the Prize is one of the most important documentaries on the civil rights movement. But many potential younger viewers have never seen it, in part because license requirements for photographs and archival music make it incredibly difficult to rebroadcast. The director, Jon Else, has said that “it’s not clear that anyone could even make ‘Eyes on the Prize’ today because of rights clearances.” The problems facing Eyes on the Prize are a result of muddied and unclear case law on fair use, but also copyright terms that have been greatly expanded. If copyright terms were 14  years, or even 50 years, then the rights to short video clips for many of these historical events would be in the public domain.

Carnegie Mellon University
Libraries submitted a filing to the Copyright Office last year
explaining that, when they tried to digitize and provide
web-based access for their collection, 22 percent of the publishers
could not be found. Google Books digitizes a large
amount of the world’s books. Alas, for many older works, it
is extremely costly or impossible for them to track down the
rightful owner of the work. ...

In 1930, 10,027 books were published in the United States. In 2001, all but 174 of these titles are out of print. But for the Sony Bono Copyright Extension [Act of 1998], digital archives could be made
of remaining copies of the 9,853 works not currently being published. But under CTEA, and with likely future term extensions, digital archivists “must continue to wait, perhaps eternally, while works disappear and opportunities vanish.” As one example, the early volumes of periodicals such as the
New Yorker, Time magazine and Reader’s Digest “provide an unparalleled window into early 20th century American life and culture [but] few if any of these works can be found online because they are still under copyright. Until they fall into the public domain, the process of clearing rights for each
article, drawing, and photograph makes digital archiving of
such composite works practically impossible.”

How many plays from the 1920s, 1930s and 1940s have high schools had to pay large fees to license and reproduce? Certainly those plays are not too old for literary and cultural value. Under a shorter copyright term, as the founders intended, written music from that era would be available to anyone for free with the click of a button, rendering most of the early jazz movement in the public domain. Would schools not be more likely to have jazz clubs for students if most of the music could be printed for free? . . . A number of orchestras have stopped performing Peter and the Wolf, by Prokofiev, because when the work returned to copyright protection after having been in the public domain, the cost of sheet music became prohibitive. In a survey by the Conductors Guild, 83 percent of orchestral conductors have a general practice of conserving resources by limiting their performances and recordings of copyrighted works. About 70 percent said they are no longer able to perform some works previously in the public domain . . ."

The "Missing 20th Century" of Books 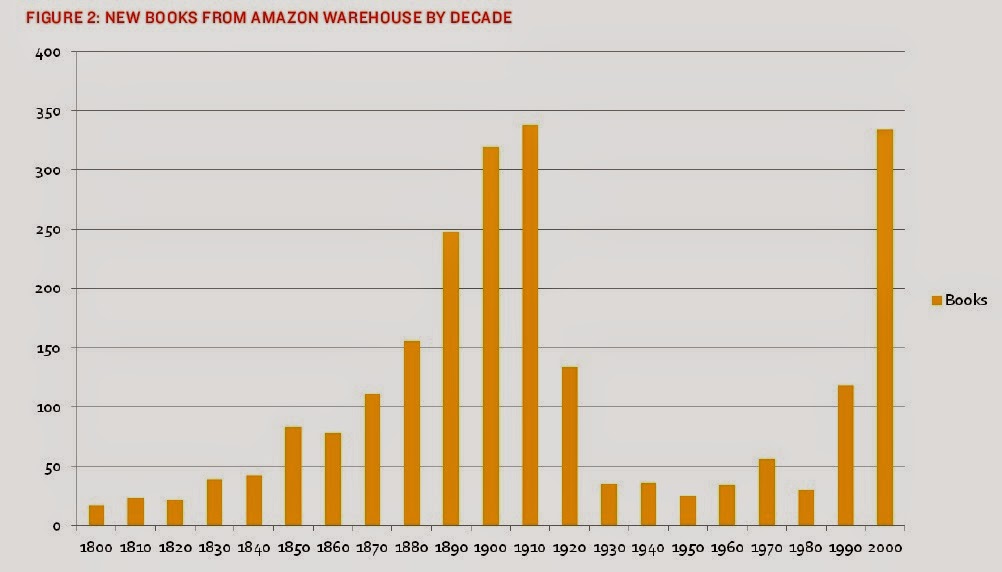 These examples can be multiplied, but I hope the basic lesson is clear. Excessively long copyright terms are not serving the purpose of promoting the arts, but have become a trough where lawyers, big corporations, and political interests joust and feed. Those who hold copyrights for successful older materials would of course like to see those copyrights extended. This no surprise, of course. I'm sure that those who hold patents on, say, successful prescription drugs would like to see the patents extended, too. But it is, of course, wild ironic that the Disney Company manages to lobby for continual extensions of  copyright to keep exclusive rights to Mickey Mouse and others--when so many the classic movies of that the company produced were based on works in the public domain: for example, Snow White, Sleeping Beauty, the music in Fantasia,  Jungle Book, Pinocchio, Aladdin, Beauty and the Beast, Alice in Wonderland, Swiss Family Robinson,and many more.

And just in case you think this is over? Khanna points out that the forces arguing for ever-longer copyright have inserted a provision in the drafts of the trade agreement called the Trans-Pacific Partnership Treaty which would extend copyright to life of the author plus 100 years--and by making this part of an international agreement, it would then become much more difficult for Congress to alter it in the future.

Posted by Timothy Taylor at 8:15 AM