Longer life expectancy is a profound blessing associated with economic development. But it raises questions for the lifetime balance between work years of earning income and retirement years of spending it. James M. Poterba explores the issues in "Retirement Security in an Aging Population," which was delivered as the Richard T. Ely Lecture in January, and has now been published in the May 2014 issue of the American Economic Review: Papers & Proceedings (104:5, pp. 1–30). The AER is not freely available on-line, but many readers will have access through library subscriptions. 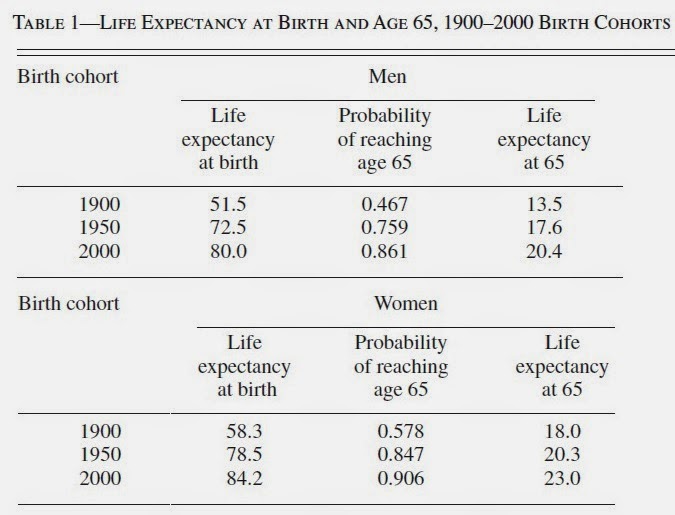 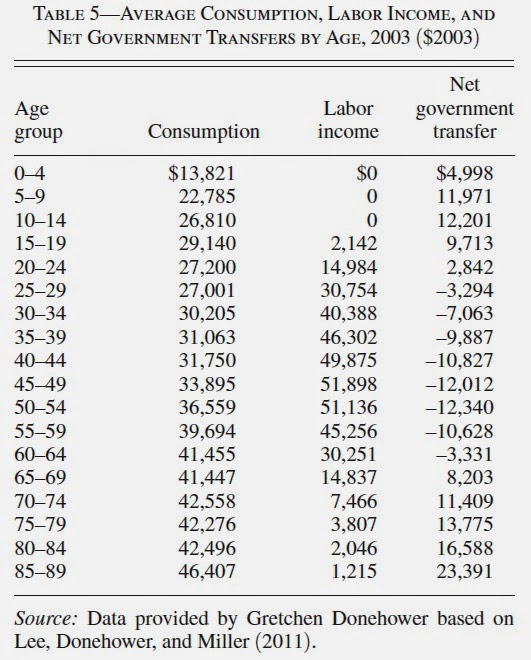 The difficulty arises, of course, because many people have life profiles of income and consumption that don't match this average. When average retirement is longer, and especially when a portion of that retirement is more likely to be spent in the above-85 age group that is more prone to physical and cognitive limitations, saving for retirement needs to be on average correspondingly larger, too.

For a sense of the differing results of working and saving over a lifetime, consider this table showing the sources of income for those over age 65. The columns show figures by income "quartile," that is, by dividing the population of elderly by income into quarters. The top panel shows the percentage of people in that income quartile receiving income from a certain source, while the bottom panel shows the amount of income received from that source. 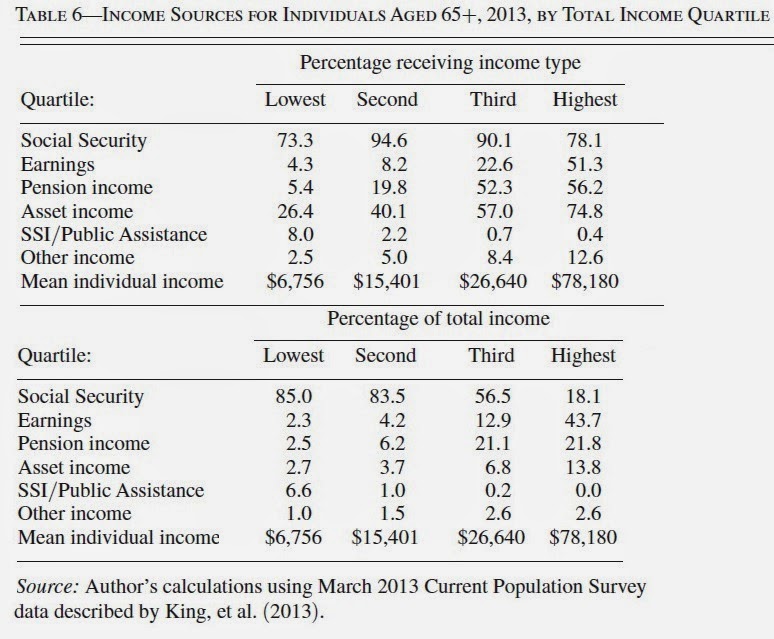 One way to think about these patterns is to divide the elderly population into three groups. First consider the lowest income quartile. About three-quarters  of this group receives Social Security, and about one-quarter receives some income from other assets. But for this group, 85% of annual income comes from Social Security. Of course, this calculation is based on income, so it doesn't count the value of in-kind benefits like Medicare, Medicaid (which covers nursing care for the low-income elderly) or Food Stamps. Also, at least some of the elderly in this group probably own their home outright, and for that group their out-of-pocket housing expenses may be relatively low. But the hard reality from this data is that something like one-quarter of the elderly will have no financial assets and perhaps no housing assets either at retirement. They will be reliant on Social Security and various public assistance programs.

Now consider the upper quartile. Although about three-quarters of this group also receives Social Security, it is not the primary source of income. Some of those in this over-65 group have not yet started receiving Social Security income, because half of this top quarter is still earning income, which accounts for 43% of the average income of this group (although this average includes both those who are working and those who are retired). More than half of this group have pension income, and three-quarters have income from other assets. This part of the population is also eligible for Medicare, and a fairly large share probably own their homes outright as well. Together with average income of $78,000, this top quarter of the over-65 population is in essentially good shape for retirement, even a retirement that lasts a few years longer than expected.

The third group is those in the middle. Some of this group, especially those in the third quartile rather than the second, are continuing to work and earn income, and a substantial share have some pension income. Still, Social Security accounts for 83% of the income of the second quartile (almost as high as for the first quarter) and well over half of average income in the third quartile. Average annual income for these groups is $15,400 for those in the second quartile and $26,600 for those in the third quartile, which with some mixture of Medicare, public assistance programs, family support, and maybe owning a house can be enough to scrape by. This is a group where public policy that provides incentives for additional saving in a retirement account while working, or working a few more years before retirement, might make a considerable difference. 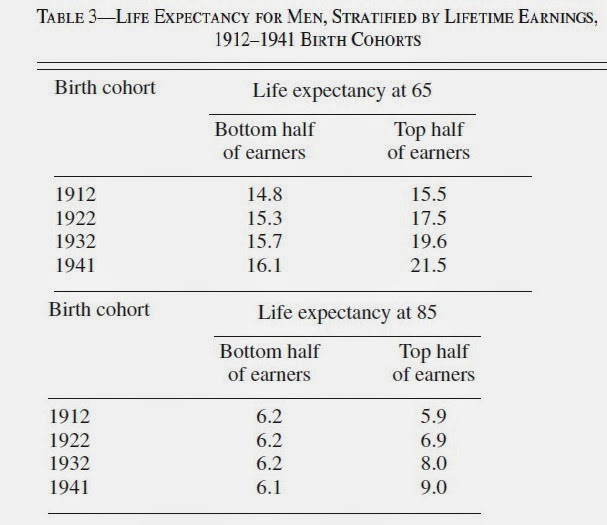 How much should you be saving for retirement? Poterba offers some eye-opening illustrative calculations. He looks at a typical path of income over time, and then asks, if at age 65 you want to buy an annuity that will provide amount equal to half of your age-65 income for the rest of your life, what share of income should you be saving? He does the calculations separately for men and women, in parat because different life expectancies. He considers several different "real" rates of return (that is, the rate of return above inflation). He looks at whether you save for 40 year, 30 years, or 20 years. And he looks at whether you want an annuity that will pay a fixed nominal amount, or one that will increase its payments by 3% per year, to offset any increases in the cost of living. 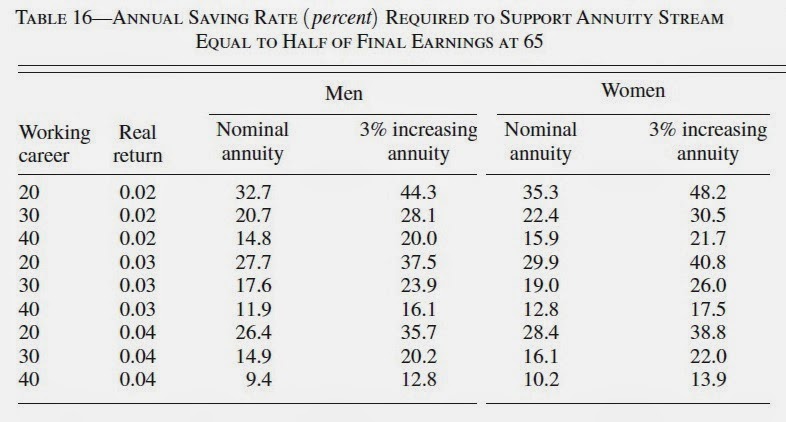 As one example of the bottom line, say that you are a man who will save for 30 years and get a 3% real return.You want to buy the annuity that starts off at half your age 65 income, and then increases 3% per year. Then over those 30 years, you need to be saving 23.9% of your income each year. The average personal saving rate for Americans--that is, saving divided by after-tax income--has been about 5% in recent years. In short, many Americans are not saving nearly enough, including many who have the income level that if it was a priority, they could manage to put more aside. Some Americans already know that they aren't going to have much income in retirement, but I suspect that in the next decade or so, many more Americans are going to reach retirement and feel surprise and disgruntlement over the low level of income they are facing.