The potential problems that could arise as microbes become resistant to antibiotics were recognized quite early. For example, Sir Alexander Fleming shared the Nobel prize in physiology or medicine in 1945 "for the discovery of penicillin and its curative effect in various infectious diseases." Near the end of his Nobel lecture, Fleming said:


"I would like to sound one note of warning. Penicillin is to all intents and purposes non-poisonous so there is no need to worry about giving an overdose and poisoning the patient. There may be a danger, though, in underdosage. It is not difficult to make microbes resistant to penicillin in the laboratory by exposing them to concentrations not sufficient to kill them, and the same thing has occasionally happened in the body. The time may come when penicillin can be bought by anyone in the shops. Then there is the danger that the ignorant man may easily underdose himself and by exposing his microbes to non-lethal quantities of the drug make them resistant. Here is a hypothetical illustration. Mr. X. has a sore throat. He buys some penicillin and gives himself, not enough to kill the streptococci but enough to educate them to resist penicillin. He then infects his wife. Mrs. X gets pneumonia and is treated with penicillin. As the streptococci are now resistant to penicillin the treatment fails. Mrs. X dies."

As it turns out, the issue is not that that antibiotics "can be bought by anyone in the shops," but instead that health care providers have been quick to prescribe antibiotics, repeatedly and for a wide range of conditions. Inevitably, not everyone takes the full dose, and in some cases the full dose doesn't quite end the infection. Some microbes become increasingly resistant to antibiotics. As economists have pointed out, this pattern is logically parallel to the issue of what can happen with the overuse of a shared public resource, the so-called "tragedy of the commons."

Imagine a shared public resource like a common field where people can graze cattle. If there are too many cattle on the field, it will degrade the environment and everyone will suffer. However, each individual has an incentive to graze just a few more cattle on the field, because the individual will receive 100% of the benefits from adding a few cattle, while the costs of environmental degradation will be shared with everyone else who uses the field. Unless some social norms or rules prevent the outcome, overgrazing will result. Of course, the same logic can be applied to overfishing, overlogging, and indeed more broadly to issues like air and water pollution. In the case of antibiotic resistance, health care providers who prescribing antibiotics frequently and easily are seeking to benefit each individual patient, while the costs of accumulating resistance to antibiotics are shared across the population. In this way, the pursuit of health for individual way, resistance to antibiotics builds in a way that can impose heavy costs.

"A post-antibiotic era—in which common infections and minor injuries can kill—far from being
an apocalyptic fantasy, is instead a very real possibility for the 21st century." So says the World Health Organization in its recent report: "Antimicrobial Resistance: Global Report on surveillance."

The WHO report draws on evidence from around the world to note a growing rise in resistance to antibiotics for some major diseases: tuberculosis, pneumonia, malaria, HIV, influenza, and others. The report notes:

"For several decades antimicrobial resistance (AMR) has been a growing threat to the effective treatment of an ever-increasing range of infections caused by bacteria, parasites, viruses and fungi. AMR results in reduced efficacy of antibacterial, antiparasitic, antiviral and antifungal drugs, making the treatment of patients difficult, costly, or even impossible. . . . Antibacterial resistance (ABR) involves bacteria that cause many common and life-threatening infections acquired in hospitals and in the community, for which treatment is becoming difficult, or in some cases impossible. . . .

Some estimates of the economic effects of AMR have been attempted, and the findings are disturbing. For example, the yearly cost to the US health system alone has been estimated at US $21 to $34 billion dollars, accompanied by more than 8 million additional days in hospital. Because AMR has effects far beyond the health sector, it was projected, nearly 10 years ago, to cause a fall in real gross domestic product (GDP) of 0.4% to 1.6%, which translates into many billions of today’s dollars globally. 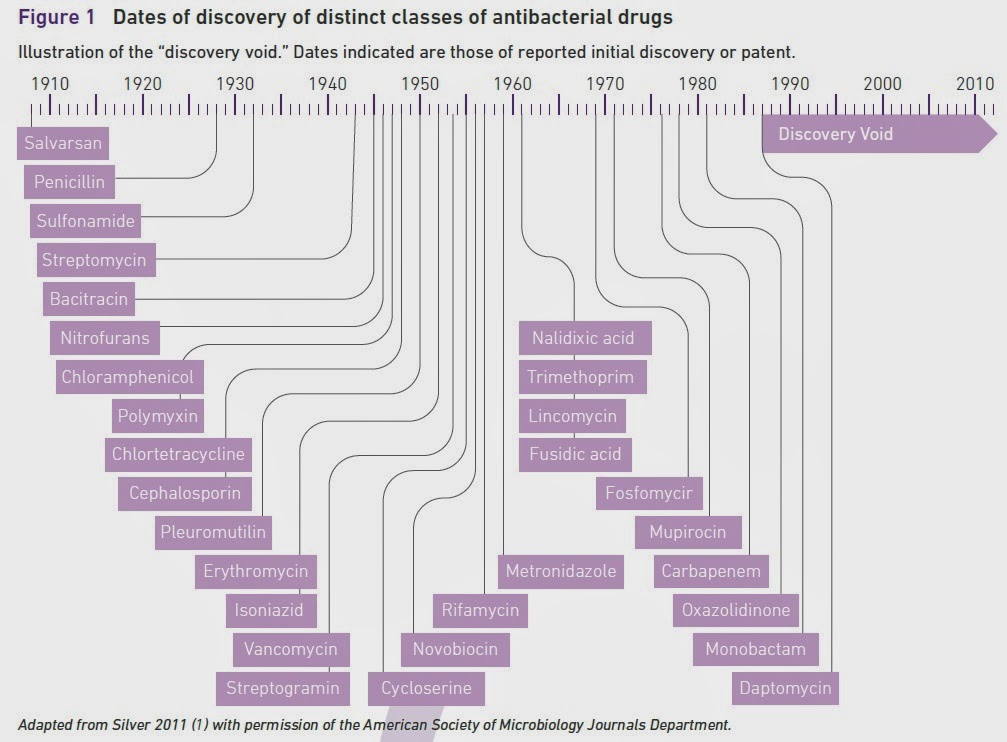 The other options all come down to ways to avoid overprescribing antibiotics--so that when they are really needed, they will still work. In too many places, antibiotics are prescribed for all sorts of conditions where they aren't going to be effective (like in response to viruses). In too many places, many steps could be taken to cut down on the risk of infections through basic steps like more hand-washing and sterilization, which would reduce the need to prescribe antibiotics. Steps like these need to be undertaking with some urgency, so that current antibiotics can keep working while we hunt for new ones.
Posted by Timothy Taylor at 6:00 AM