Volunteers for Blood, Paying for Plasma

The U.S. seems to have a consensus, about which many people have strong feelings, that blood donors should be volunteers. However, the U.S. is also the country which relies most heavily for a paid supply of blood plasma, and in fact exports plasma to the rest of the world. Robert Slonim, Carmen Wang, and Ellen Garbarino explore this and many other aspects of "The Market for Blood" in the Spring 2014 issue of the Journal of Economic Perspectives. (Full disclosure: I've been managing editor of the JEP since the first issue in 1987. All articles in JEP back to that first issue are freely available on-line compliments of the American Economic Association.)


Slonim, Wang, and Garbarino point out that a volunteer blood system can have problems in adjusting to fluctuations in demand for blood. For example, in the aftermath of disasters like the terrorist attacks of 9/11 or Hurricane Katrina in 2005, blood donations spike up. However, these events didn't actually lead to a large demand for blood, and since blood has a limited shelf life, a substantial share of these donations ended up being destroyed. On the other side, there are predictable seasonal fluctuations in demand for blood, like shortages in winter and around holidays. They have some sensible suggestions,within the context of a volunteer blood system, about how one might mobilize irregular donors of blood to address such fluctuations.

For me, the most intriguing questions concern the issue of whether the blood supply should be paid or volunteer. Of course, the issue only affects donors of blood--everyone else in the health care system is expecting to be paid when they store and use this valuable health product. Slonim, Wang, and Garbarino write (citations and footnotes omitted): "Even with a largely voluntary supply of blood, the blood industry can be regarded as a multibillion–dollar market because hospitals pay for blood products and charge patients for their use. For example, the cost of the components of each unit of blood sold to hospitals in the United States is approximately $570, with the cost for red blood cells at $229, platelets at $300, and plasma at $40. Hospitals transfuse this blood at estimated costs of between $522 and $1,183 per unit in the United States and Europe."

The question of whether a country relies on volunteer or paid blood supply is in part an historical accident, often relating to how blood systems evolved in the decades after World War II. Volunteer blood donation is more common in high-income countries, but many countries in Latin America rely on paid blood donors. In the past, it may have been true that blood from paid donors was less likely to be safe, but given modern techniques for screening blood (and plasma), this pattern no longer seems to be true. Looking at the evidence across countries, Slonim, Wang, and Garbarino state: Thus, while volunteer and nonvolunteer donor characteristics may differ, on the critical issue of blood safety, we find no evidence that countries with higher percentages of volunteer donors provide safer blood." 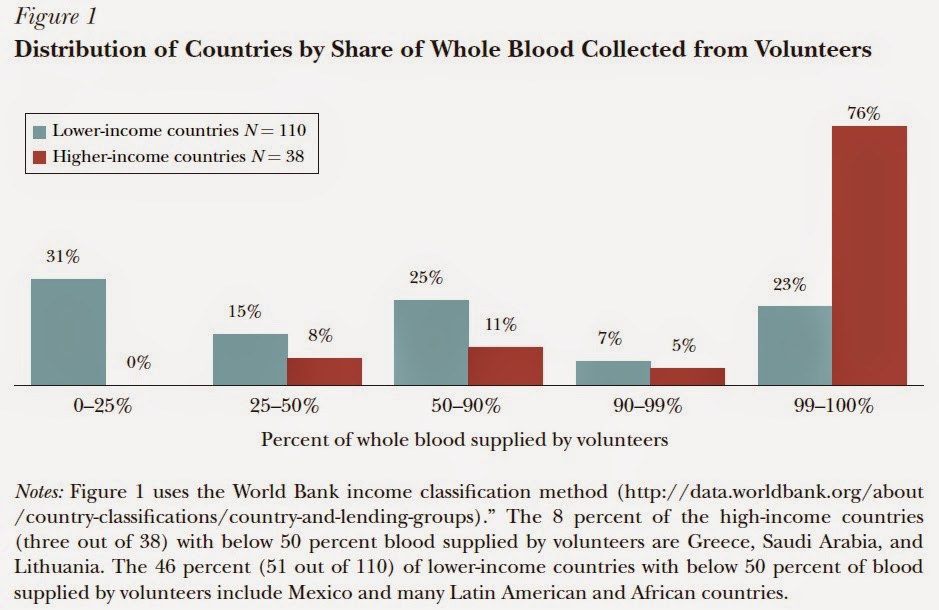 In the U.S, a divergence emerged in the 1970s when the blood supply became almost entirely dependent on voluntary donors, while the supply of blood plasma came to rely on paid donors. Slonim, Wang, and Garbarino write: "In contrast to most high-income countries relying on
100 percent volunteer plasma supply, by 2004, 81 percent of US plasma supply was collected from paid donors. In 2004, the United States collected almost 70 percent of the world’s plasma, with 40 percent eventually used in North America, 32 percent used in Europe, and 19 percent used in Asia."

This divergence raises some uncomfortable questions for those who believe strongly that the blood supply should depend on volunteer donors. Why are all the arguments for volunteer blood donors equally true for plasma donors? More important, it raises a question of whether the U.S. and other countries that use a volunteer blood donor system are using a method that has worked fairly well in providing a steady supply, but is not providing a larger supply that would over time encourage innovation in health care goods and services that rely on blood. Here is how Slonim, Wang, and Garbarino make this point:

However, it is impossible to say how well the volunteer [blood donor] system has performed in an absolute perspective; for example, it is possible that if the blood supply was to increase via a market mechanism that priced blood to its marginal value, then healthcare providers would find innovative uses for it such as the recent trials on the use of plasma derivatives to treat Alzheimer’s. In other words, volunteer supply may meet current demand because the health industry is not aggressively pursuing research and development that might lead to greater demand for blood that they recognize the volunteer system cannot supply.

The volunteer system, however, has not done well in meeting plasma demand. The United States is the only country that is totally self-sufficient in all blood and plasma products and has accomplished this using a mostly for-profit plasma industry. Most other countries have to import at least some plasma products, with the single biggest importers being Germany, Austria, and Spain. Many countries remain unwilling to pay for plasma donations due to concerns regarding safety and ethics, which may explain the dramatically different usage rates for plasma products. For instance, in 2006 the US health care system used 105 grams per/1,000 people of the dominant plasma product (immunoglobulin) which was more than 250 percent of the rate in Italy, the United Kingdom, Germany, the Netherlands, and Japan, suggesting that the noncompensated plasma collection system might be limiting potential usage in many countries.

Making a transition from a volunteer blood supply to more of a paid blood supply seems to me fraught with practical difficulties. Disrupting the established methods of blood supply should not be done lightly. But it also seems to me that the issues here are neither about the safety of blood from paid donors, given the capabilities of modern blood testing, nor are the issues about the risk of exploiting paid blood donors, given that such arguments would apply equally well to the already widespread practice of paying plasma donors. The real issues should be about the practicalities of making such a change to more paid blood donation, at least in a partial way, and about the potential costs and benefits from such a transition.