Prices Around the World for Gasoline

Prices for gasoline and diesel fuel vary a great deal around the world, because some countries tax these goods heavily, while others subsidize them. Lucas W. Davis considers the effects in "The Economic Cost of Global Fuel Subsidies," published in the May 2014 issue of the American Economic Review: Papers & Proceedings (104:5,  pp. 581–585). (The AER is not freely available on-line, but many readers will have access through library subscriptions.) 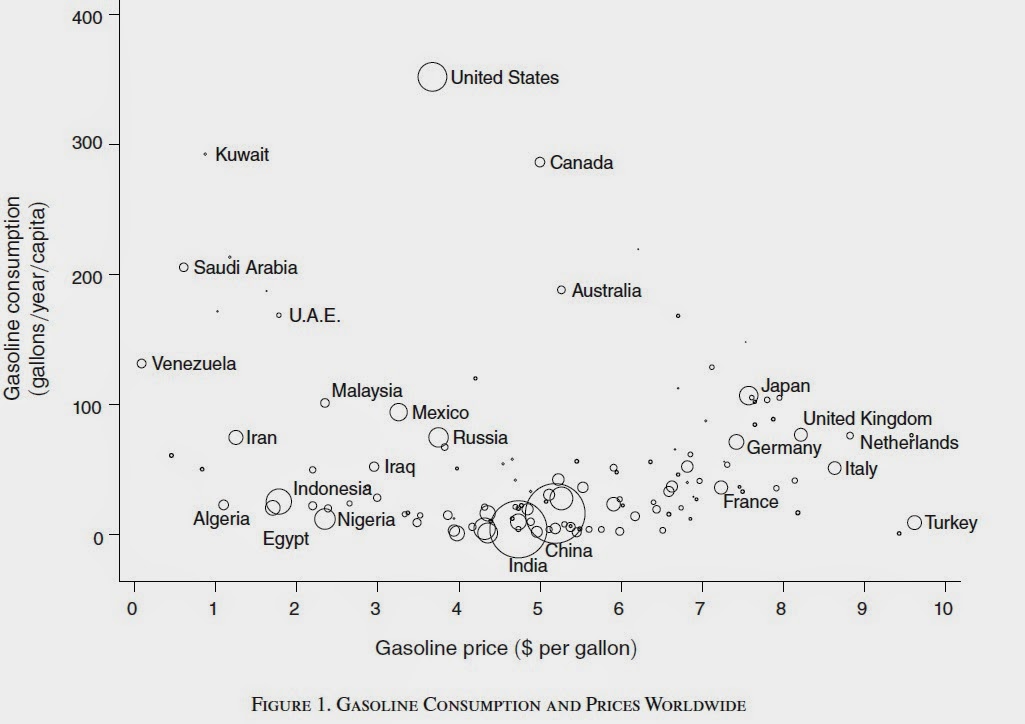 1) The price of gasoline in the U.S. is well below that many other high-income countries. That isn't the only reason the U.S. consumes so much more fuel on a per capita basis--as a high-income and geographically sprawling country, one would expect U.S. fuel consumption to be higher--but it's one of the reasons. The higher taxes on gasoline are part of a general pattern where the governments of most high-income countries rely more heavily on consumption taxes, including value-added taxes as well as taxes on specific goods like gasoline, than does the U.S. government.

2) Venezuela has the lowest fuel prices of any country: indeed, their prices are well below the actual world market price. Presumably, the political leadership in Venezuela believes that its political base supports this policy--and this belief may well be correct. But subsidizing fuel has a cost, which in Venezuela's case is about $14 billion out of a GDP of $380 billion--that is, almost 4% of GDP in Venezuela goes to fuel subsidies. For comparison, the U.S. defense budget is projected to be 3.6% of GDP this year. When Venezuela spends, in proportional terms, the amount of the U.S. defense budget on fuel subsidies, it give up the possibility of spending those funds on health care, education, income support, and so on. Indeed, the bulk of fuel subsidies don't go to the poor--who don't have enough income to buy a lot of fuel at any price--but instead go to those with middle- and upper-level incomes.

3) Worldwide, governments spend about $110 billion annually on fuel subsidies. Of that amount, 90% is for the ten countries listed in the table below. By the measure used here, the U.S. does not subsidize oil and gas production on an overall basis, given the mixture of gasoline taxes on one side and various ways of favoring oil-producers in the tax code on the other. Davis writes: "Fuel subsidies also have a large impact on government budgets, requiring taxes to be higher than they would otherwise, and inhibiting the ability of government to address other fiscal objectives. Expenditures on energy subsidies in many of these countries exceed public expenditures
on health, education, and other key components of government spending." 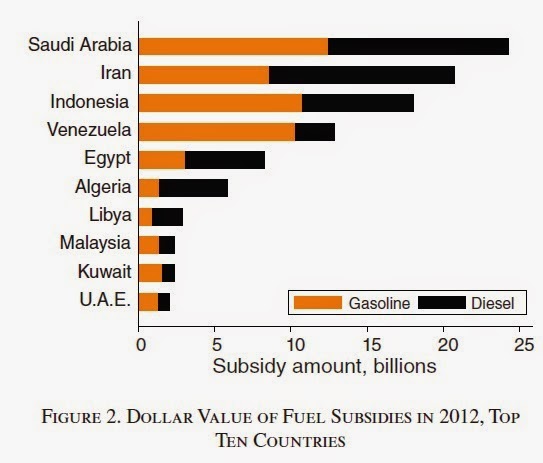