Each year the Federal Trade Commission and and the Department of Justice Antitrust Division publish the Hart-Scott-Rodino Annual Report, which offers an overview of merger and acquisition activity and antitrust enforcement during the previous year. The Hart-Scott-Rodino legislation requires that all mergers and acquisitions above a certain size--now set at $75.9 million--be reported to the antitrust authorities before they occur. This reporting thus offers an overview of merger activity in the United States. 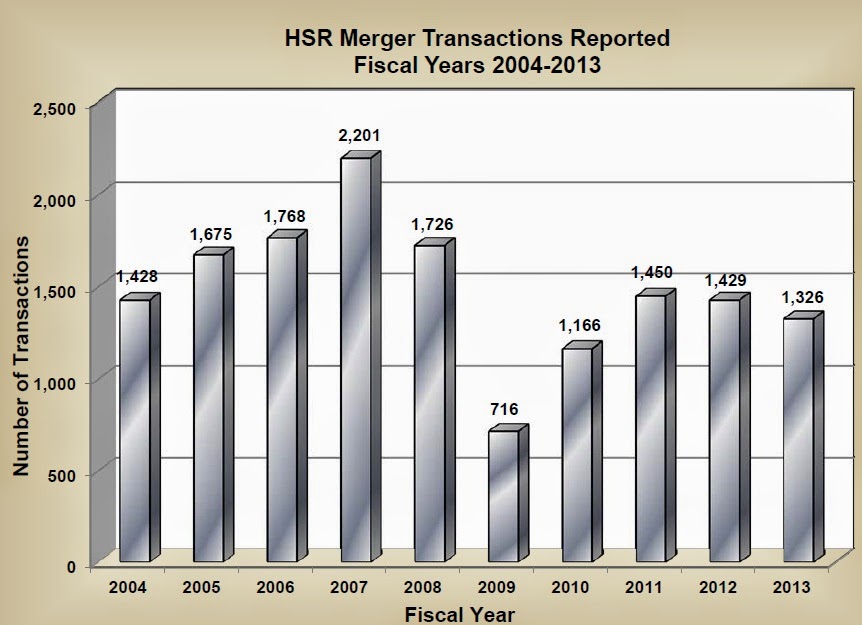 Basically, the story is that the number of mergers and acquisitions has rebounded from the lows of the Great Recession, but the total for 2013 was pretty average. Some press sources, like the Economist magazine, are chirping about the possibility of a new wave of mergers and acquisitions right around the corner. They have been making that prediction for a couple of years now, and sooner or later it will be correct.

The report also shows the size distribution of mergers. Remember that the very small number of mergers under $50 million is not because such mergers don't occur, but because the smaller mergers need not be reported to the antitrust authorities. 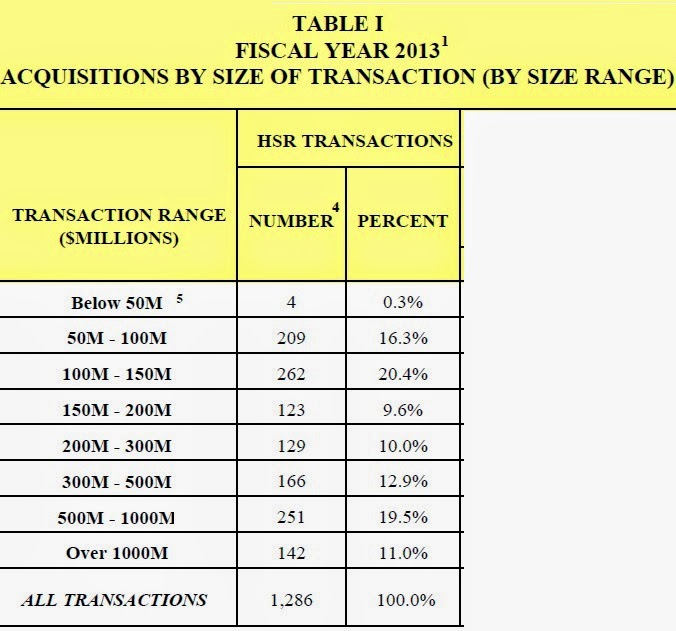 The report also offers quick overviews of the more prominent antitrust enforcement actions over the last year. For teachers of economics looking for a quick example, here are two good examples, with links to the underlying case documents. In both cases, the antitrust authorities allowed a merger to proceed only after the firm agreed to divest various assets in a way that was intended to preserve competition.

One case is the merger between US Airways and American Airlines (or AMR Corporation). The report notes:

In United States, et al. v. US Airways Group, Inc. and AMR Corporation, the Division
and the states of Texas, Arizona, Pennsylvania, Florida, Tennessee, Virginia, and the District of Columbia challenged the proposed $11 billion merger between US Airways Group, Inc. and American Airlines’ parent company, AMR Corporation. The complaint alleged that the transaction, as originally proposed, would substantially lessen competition for commercial air travel and result in passengers paying higher airfares and receiving reduced service. In addition, the transaction would reduce competition in the market for slots at National Airport where the merged carrier would control almost 70% of the slots. A proposed consent decree settling the suit was filed November 12, 2013, requiring US Airways and American to divest slots and gates in key constrained airports across the country to low cost carriers in order to enhance system-wide competition in the airline industry and address the competitive harm that would result from the proposed transaction. Specifically, the companies are required to divest or transfer: (i) 104 air carrier slots and related gates and facilities at Washington Reagan National Airport; (ii) 34 slots at New York LaGuardia Airport and related gates and facilities; and (iii) two gates and
related facilities at each of five airports: Boston Logan, Chicago O’Hare, Dallas Love Field, Los Angeles International, and Miami International. These divestitures are the largest ever in an airline merger and will allow low cost carriers to fly more direct and connecting flights throughout the country in competition with the legacy carriers. This will result in more choices and more competitive airfares for consumers. The court entered the consent decree on April 25, 2014.

Another case that might make a useful example, given the general preoccupation of many college students with the beer industry, is the proposal from Anheuser-Busch (ABI) to purchase Modelo. The "competitive impact statement" filed by the antitrust authorities notes:

The beer industry in the United States is highly concentrated and would become more so
if ABI were allowed to acquire all of the remaining Modelo assets required to compete in the United States, as the transaction was originally proposed. ABI and MillerCoors, the two largest  beer brewers in the United States, account for more than 65% of beer sold in the United States.  Modelo is the third largest beer brewer, constituting approximately 7% of national sales, and in  certain MSAs its market share approaches 20%. Heineken and hundreds of smaller fringe competitors comprise the remainder of the beer market. In the 26 MSAs alleged in the  Complaint, ABI and Modelo control an even larger share of the market, creating a presumption  under the Clayton Act that the merger of the two firms would result in harm to competition in  those markets.

The Hart-Scott-Rodino report sums up the consent decree:

In United States v. Anheuser-Busch InBev SA/NV and Grupo Modelo S.A.B de C.V., the
Division challenged Anheuser-Busch InBev’s (ABI) proposed acquisition of the remaining
interest in Grupo Modelo that ABI did not already own. According to the complaint filed on January 31, 2013, as originally proposed, the $20.1 billion transaction would have substantially lessened competition in the market for beer in the United States as a whole and in 26 metropolitan areas across the United States, resulting in consumers paying more for beer and diminished innovation. ABI’s Bud Light is the best selling beer in the United States, and Modelo’s Corona Extra is the best selling import. On April 19, 2013, a consent decree was filed settling the suit and requiring Modelo and ABI to make divestitures that would fully replace Modelo as a competitor in the United States. The decree called for the divestiture of Modelo’s entire U.S. business including perpetual and exclusive licenses of Modelo brand beers for distribution and sale in the United States, its most advanced brewery, Piedras Negras, and its interest in Crown Imports, LLC (Crown) to Constellation Brands, Inc. (Constellation) or an alternative purchaser. Crown was the joint venture established by Modelo and Constellation to import, market, and sell certain Modelo beers into the United States. The decree was entered by the court on October 24, 2013.