Africa: Trade Within, Trade Beyond

It's common to talk about economic development "in Africa," and I've done so on this blog a few times (for some examples, here, here, here and here). But "Africa" includes 54 countries and 1.1 billion people, so does referring to it as a single unit make any economic sense? In my reading, one of the themes of the African Economic Outlook 2014, recently published by the African Development Bank Group, OECD, and the UN Development Programme, is that thinking about Africa as a whole does make some economic sense.

The reason is that in the modern global economy, there are no examples of small stand-alone economies that have achieved a high standard of living. Instead, the high-income countries either have an enormous internal market (the US and Japan, for example) or have close economic ties to a number of other national economies (like the countries of the European Union), or both. If the national economies of Africa are going to build on their real if modest economic progress of the last decade or so, one of the big reasons will probably be that they bolster trade relationships within the countries of Africa, as well as tap into international flows of goods, services, people, and finance. To some extent, this change is already underway.

As far as trade within Africa, one subsection of the report is headlined: "Africa is the world’s fastest growing but least globally integrated continent. ... There is only low level connectivity between African economies – although this is gradually improving . . .. This is largely due to an incomplete
legal architecture for regional integration, poor physical infrastructure and one-way trading relationships. Leading African exporters such as Angola, Algeria, Egypt, Libya, Morocco, Nigeria and South Africa have stronger economic links to the rest of the world than with regional neighbours." As one example of the issues, the 54 nations of Africa are divided into eight somewhat overlapping regional economic groups, all proceeding with various steps of economic integration at different speeds.

Here's a figure comparing intra-Africa trade with other trading partners. A common pattern--say, if one looks at the EU or at North America--is that trade volumes are larger with those who are geographically close. But intra-African trade (the black dashed line) is similar trade between African nations and the US, and lags behind Africa's trade with China or especially the EU.

Basic steps to encourage intra-African trade are still lacking. It's costly for people to move between countries: "Africans need visas to get into at least two thirds of other African countries." It's hard for goods and services to move, because of missing infrastructure: "While there has been progress in developing regional transport corridors, there are still missing links – which are investment opportunities for African and foreign investors. From the Ethiopia-Djibouti corridor, to Lagos-Abidjan, major road corridor upgrades are needed to link key cities to ports and airports. ...  Increasing attention is being given to obstacles such as regulatory bottlenecks, the opaque legal environment and institutional inefficiencies holding up new infrastructure."

The economies of Africa are becoming more closely tied to the buying power in the rest of the world economy in various ways. One of the most visible signs is the type and size of financial flows to Africa. The graph shows four kinds of financial flows: remittances sent back to Africa from emigrants working abroad; official development assistance; portfolio investment, which consists of cross-national financial investments that don't involve a management interest and thus can be liquidated very quickly; and foreign direct investment, which consists of cross-national financial investments that do have a management interest. 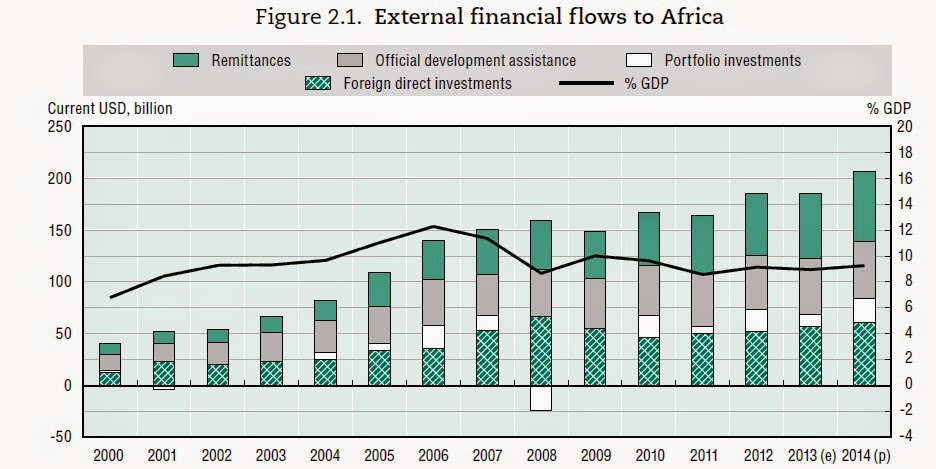 A common question is whether the foreign direct investment into Africa is all about outsiders developing oil and minerals. That's clearly a big part of the picture, but not all of it. Here's a breakdown of foreign direct investment into African countries that are resource-rich, and those that are not. The absolute amounts of FDI into the resource-rich countries is larger, but the flow to the non-resource-rich is catching up--and is already larger as a share of GDP. 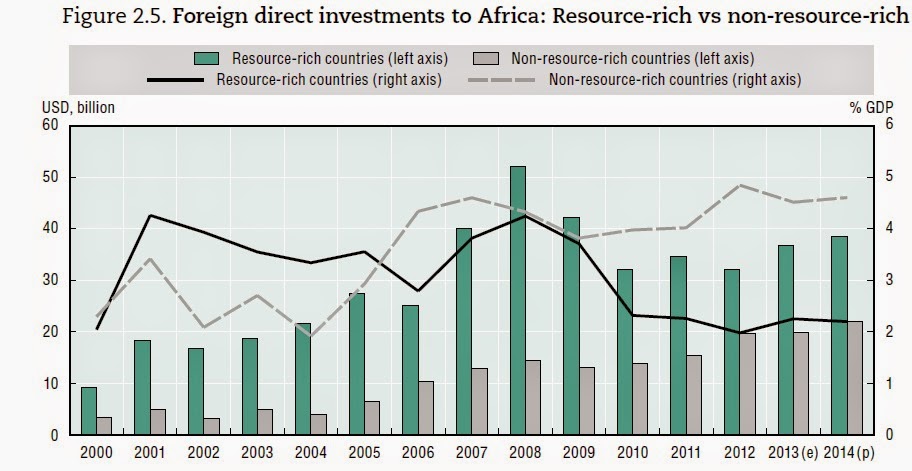 The overall effect of these foreign capital inflows is that Africa is able to finance more investment than if it had to depend solely on national saving. Here's a figure showing that Africa's investment/GDP ratio and its rate of economic growth have outstripped Latin America in recent years, although not reaching the levels of high-growth Asian economies. 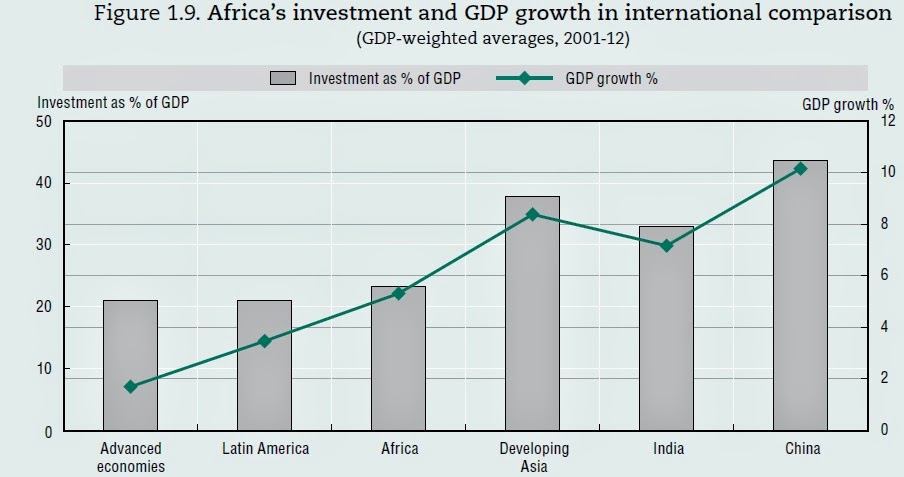 One of the intriguing possibilities for Africa's economic future is for its economies to become more integrated into "global value chains," in which intermediate inputs to production are produced in a number of different countries. The report devotes a special section and several chapters to this possibility.


"In the past, for a country to industrialise it had to develop the domestic capacity to perform all major steps in the value chains of complex  manufactured products. Today, through linking into an international production network, countries can establish a specific section of a product’s value chain without having all the upstream capabilities in place. These remain elsewhere and are linked through shipments of intermediate products and communication of the know-how necessary for the specific step in the value chain present in the country. . . . Through participation in a value chain, countries and firms can acquire new capabilities that make it possible to upgrade, i.e. to capture a higher share of the value added in a global value chain. The development experiences of several Asian countries show how industrialisation depends on linkages and on innovations arising from knowledge spillovers. For instance, China integrated into global value chains by specialising in the activities of final product assembly and was capable of upgrading its participation by building a competitive supply base of intermediate goods (developing linkages) and by enhancing the quality of its exports. At the firm level, economic upgrading is defined as “moving up” the value chain into higher-value activities, which theoretically enables firms to capture a higher share of value in the global value chain and enhances competitiveness . . .


Many of the factors that hinder economic integration across Africa, or affect economic growth in Africa more broadly, also affect the prospects for Africa's participation in global value chains. Still, there are a few initial promising signs. Some African countries are making a push to be involved in the business outsourcing market: "The global business processing outsourcing market was forecast to grow 5.1% in 2013 and reach USD 304 billion. The race is on among countries such as Egypt, Kenya, Ghana, Mauritius, South Africa, Tunisia and Uganda to become the new “India” in Africa using incentives and special economic zones to develop their outsourcing sectors."

Perhaps the biggest problem is that global value chains as they currently exist are regionally concentrated: around east Asia, the European Union, and North America. Geographic areas like Africa or Latin America are thus trying to break into these existing networks:


"Despite their name, global value chains exhibit high regional concentration, which is shrinking slowly. Africa does not play a significant role yet. When measuring the linkages between major supply-chain traders, the strongest relationships can be found within the regional blocks of East Asia, Europe and North America. About 85% of global value chain (GVC) trade in value added takes place in and around these three hubs. While other regions remain marginal, their share has increased from only 10% in 1995 to 15% in 2011. Africa’s share in GVC participation increased from 1.4% to 2.2% during the same time."