Here's one snapshot of how the U.S. economy evolved in the last 15 years: an identical number of total hours worked in 1998 and 2013, even though the population rose by over 40 million people, but a 42% gain in output. Shawn Sprague explains in "What can labor productivity tell us about the U.S. economy?" published as the Beyond the Numbers newsletter from the U.S. Bureau of Labor Statistics for May 2014. Sprague writes:


"[W]workers in the U.S. business sector worked virtually the same number of hours in 2013 as they had in 1998—approximately 194 billion labor hours. What this means is that there was ultimately no growth at all in the number of hours worked over this 15-year period, despite the fact  that the U.S population gained over 40 million people during that  time, and despite the fact that there were thousands of new businesses established during that time. And given this lack of growth in labor hours, it is perhaps even more striking that American businesses still managed to produce 42 percent—or $3.5 trillion—more output in 2013 than they had in 1998, even after adjusting for inflation. . . .One thing can be said for certain: the entirety of this additional output growth must have come from productive sources other than the number of labor hours. For example, businesses may increase output growth by investing in faster equipment, hiring more high-skilled and experienced workers, and reducing material waste or equipment downtime. In these and other cases, output may be increased without increasing the number of labor hours used. Gains in output such as these are indicative of growth in  labor productivity over a period."

A lot can be said about this basic fact pattern. Of course, the comparison years are a bit unfair, because 1998 was near the top of the unsustainably rapid dot-com economic boom, with an unemployment rate around 4.5%, while 2013 is the sluggish aftermath of the Great Recession. The proportion of U.S. adults who either have jobs or are looking for jobs--the "labor force participation rate"--has been declining for a number of reasons: for example, the aging of the population so that more adults are entering retirement, a larger share of young adults pursuing additional education and not working while they do so,  a rise in the share of workers receiving disability payments, and the dearth of decent-paying jobs for low-skilled labor.

Here's a figure showing the patterns of hours worked, output, and productivity in the aftermath of the Great Recession. Sprague explains: "[A]s the recession began, productivity flattened out as output and hours both fell approximately in concert with one another. Output and hours continued to fall together until the latter part of the recession, when the fall in output ceased but hours continued to decline. During this period there was substantial productivity growth: from the fourth quarter of 2008 through the fourth quarter of 2009, productivity grew 5.6 percent. In fact, this was the highest four-quarter rate of productivity growth recorded in more than 35 years." 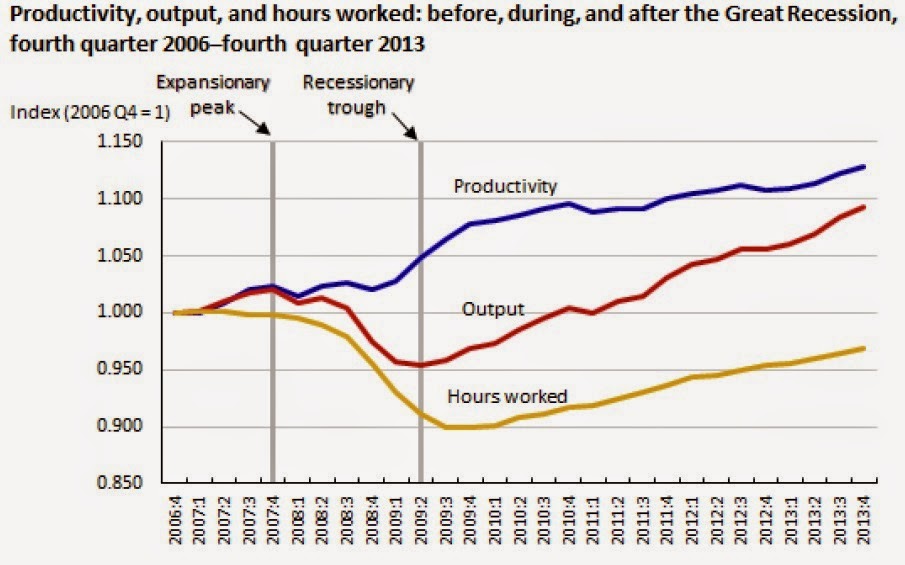 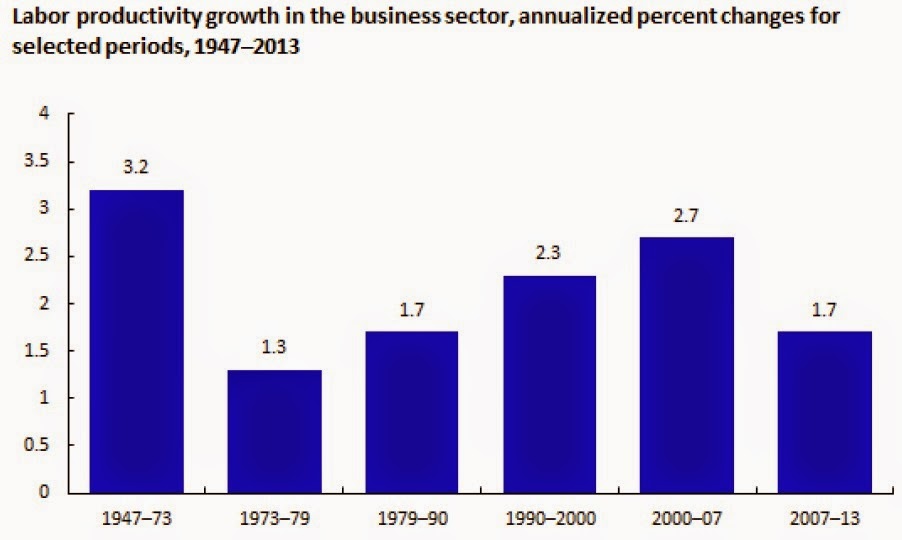 The more immediate question is what to make of an economy that is growing in size, but not in hours worked, and that is self-evidently having a hard time generating jobs and bringing down the unemployment rates as quickly as desired. I'm still struggling with my own thoughts on this phenomenon. But I keep coming back to the tautology that there will be more good jobs when more potential employers see it as in their best economic interest to start firms, expand firms, and hire employees here in the United States.