The North American Free Trade Agreement turns 20 this year. What's has it done? Gary Clyde Hufbauer, Cathleen Cimino, and Tyler Moran discuss the evidence in "NAFTA at 20: Misleading  Charges and Positive  Achievements," written for the Peterson Institute for International Economics (May 2014, Number PB14-13).

For those who don't remember, NAFTA was a burning political issue of its time, perhaps the single largest  issue launching Ross Perot as a third-party candidate for president in 1992. In June 1992, before the November election, Perot was for a time polling ahead of both George Bush and Bill Clinton. NAFTA was the first time the U.S. had signed a major trade agreement with a country that wasn't another high-income country, and Perot and others made dire predictions about the result. Hufbauer, Cimino, and Moran summarize the political debate:


"In truth the claims on both sides of the NAFTA issue 20 years ago were overblown. Since the Mexican economy is less than one-tenth the size of the US economy, it is not plausible that trade integration could dramatically shape the giant US economy, even though integration could exert a substantial impact on the relatively small Mexican economy. But exaggeration and sound bites are the weapons of political battle, and trade agreements have been on the front line for two decades. President Bill Clinton, for example, declared that NAFTA would “create” 200,000 American jobs in its first two years and a million jobs in its first five years. Not to be outdone, NAFTA opponents Ross Perot and Pat Choate projected job losses of 5.9 million, driven by what Perot derided as a “giant
sucking sound” emanating from Mexico that would swallow American jobs. Both of these claims turned out to be overblown, especially the one advanced by Perot and Choate."

Of course, most economists see trade agreements in a fundamentally different way than these kinds of politically driven predictions, not about adding to the total number of jobs nor subtracting from the total number of jobs in any significant way, but instead about adding competitive pressures that restructure the labor market--adding jobs in some areas and reducing them in others. The restructuring of an economy from lower-productivity to higher-productivity jobs is a fundamental part of what raises the standard of living over time. Public policy has a legitimate role to play in smoothing this transition.

Hufbauer, Cimino, and Moran point out that every year, even when the economy is growing well, about four million Americans lose jobs involuntarily through layoffs or shutdowns. They estimate that about 5% of this job churn, perhaps 200,000 jobs per year, can be attributed to expanded trade with Mexico.  Despite the dire predictions of NAFTA opponents, the U.S. economy boomed through the rest of the 1990s, and after the 2001 recession, the unemployment rate was 5% or less from June 2005 through February 2008, before the Great Recession hit with full force. NAFTA had essentially no effect on the total number of US jobs.

As the Pew surveys on public perception of FTA [free trade agreement] effects on jobs seem to confirm, American workers who owe their jobs to rising exports are usually oblivious to their dependence on foreign sales (in sharp contrast to workers who lose their jobs to rising imports). Based on the increase in US exports to Mexico, averaging $25 billion annually between 2009 and 2013, about 188,000 new US jobs were supported each year by additional sales to Mexico. The figure is almost as large as the jobs lost, but the jobs gained in other sectors pay better. On average, the export-related jobs pay 7 to 15 percent more than the lost import-competing jobs. Th e wage diff erential, while positive, is only part of overall US gains from trade with Mexico. . . .

Amidst the arithmetic of jobs lost and gained, it should not be forgotten that a large portion of two-way trade among the NAFTA economies represents imported intermediates that raise the competitiveness of US firms, enabling them to improve their export profile in world markets. In other words, imports benefit not just US consumers but also US firms that can acquire just the right intermediate components at the right price. . . . [G]ains to the US economy average several hundred thousand dollars per net job lost.

What about effects on wages? Interestingly, it turns out that various studies which do find that U.S. trade with China has had a negative effect on US manufacturing wages, similar studies do not find that trade with Mexico has had a similar effect. They explain:


Possibly the main reason the wage impact between Chinese and Mexican imports differs is that US trade with Mexico is roughly balanced and has a large intraindustry component (e.g., autos and parts shipped in both directions), whereas US trade with China is highly unbalanced and entails very large US imports of consumer goods in exchange for much smaller US exports of capital goods. Because of these features, US imports from Mexico compel considerably less job churn between industrial sectors than US imports from China, and this could account for the difference in estimated wage impact.

Overall, here's a picture showing how bilateral merchandise trade between the U.S., Canada, and Mexico has risen since the passage of NAFTA. The blue bars show bilateral imports and exports  before the free trade agreement; the dark green bars show how much trade would have increased if it had just mirrored overall economic growth; and the light green bars show the increase in trade above that level. 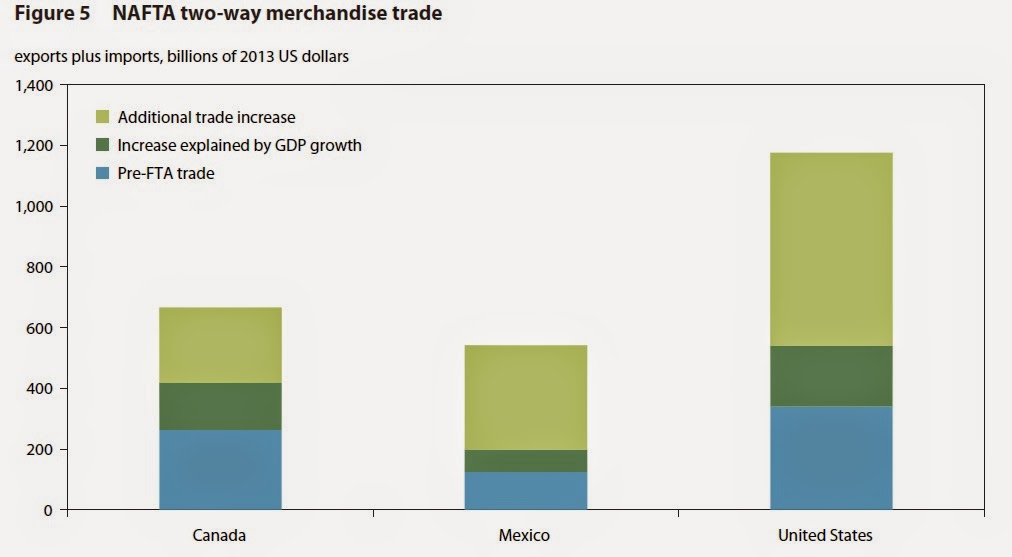 Hufbauer, Cimino, and Moran estimate the gains in this way:


"Ample econometric evidence documents the substantial payoff from expanded two-way trade in goods and services. Through multiple channels, benefits flow both from larger exports and larger imports. ... The channels include more efficient use of resources through the workings of comparative advantage, higher average productivity of surviving firms through “sifting and sorting,” and greater variety of industrial inputs and household goods.  ... As a rough rule of thumb, for advanced nations, like Canada and the United States, an agreement that promotes an additional $1 billion of two-way trade increases GDP by $200 million. For an emerging country, like Mexico, the payoff ratio is higher: An additional $1 billion of two-way trade probably increases GDP by $500 million. Based on these rules of thumb, the United States is $127 billion richer each year thanks to “extra” trade growth, Canada is $50 billion richer, and Mexico is $170 billion richer. For the United States, with a population of 320 million, the pure economic payoff is almost $400 per person."


As we look around the globalizing economy today, one emerging pattern is regional mixtures of the technology and design skills of high-income countries with the manufacturing skills of lower income economies. We see Factory Asia, with Japan and Korea partnering with China, Thailand, Indonesia, and others. We see Factory Europe, with Germany in particular partnering with countries of eastern Europe. And we see Factory North America, with the U.S. and Canada partnering with Mexico. In a sense, the NAFTA agreement back in 1994 was a test of the willingness of the U.S. economy to embrace--at least hesitantly!--the future of a globalizing economy. As the bulk of the world economy continues its shift toward middle income economies, the U.S. economy will face a continual series of adjustments to the globalizing  economy in the decades ahead.