Here are two sets of levelized estimates for producing electricity that I've put together from an April 2014 EIA report. The first column shows levelized costs, expressed in 2012 dollars per megawatt/hour, of producing electricity for a plant where construction is started now, and the plant is ready to produce full-scale in 2019. The second column, again expressed in 2012 dollars per megawatt/hour, is the estimated cost for a plant that would be started in about 20 years, and would begin producing in 2040. Thus, the second column incorporates estimates of how costs of various fossil fuels and technological progress in electricity production will happen in the next couple of decades. 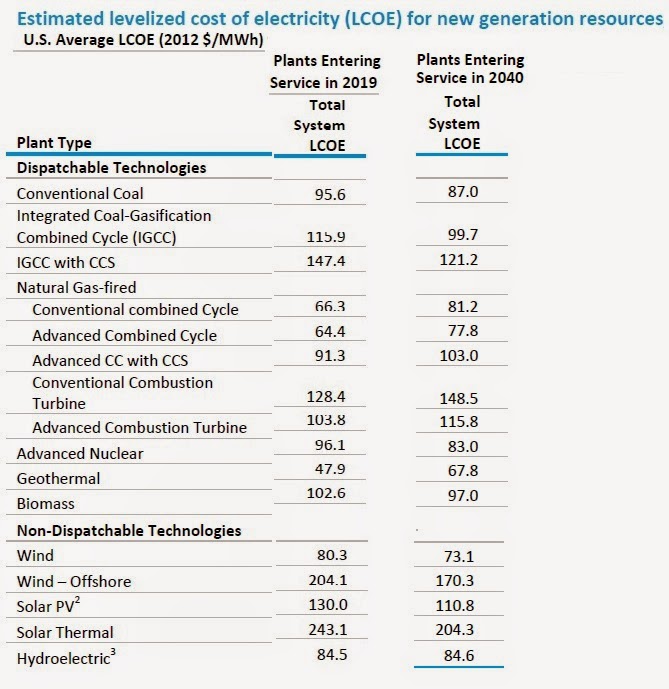 Here are some thoughts about these numbers:

1) The table is divided into "dispatchable" and "non-dispatchable" technologies. Basically, dispatchable technologies produce electricity when you want it. Non-dispatchable technologies produce electricity when nature is willing: that is, when the wind is blowing, the sun is shining, and there's water in the dam to flow through the turbines. For understandable reasons, those responsible for running electrical grids have some preference for dispatchable energy, because they know it can be there when they want it. However, this advantage is not taken into account in the levelized cost estimates.

4) An obvious question about these comparisons is the extent to which they take environmental differences into account: in particular, what about the carbon emissions from burning fossil fuel? The EIA writes: "3 percentage points are added to the cost of capital when evaluating investments in greenhouse gas (GHG) intensive technologies like coal-fired power and coal-to-liquids (CTL) plants without carbon control and sequestration (CCS). In LCOE terms, the impact of the cost of capital adder is similar to that of an emissions fee of $15 per metric ton of carbon dioxide (CO2) when investing in a new coal plant without CCS, which is representative of the costs used by utilities and regulators in their resource planning. The adjustment should not be seen as an increase in the actual cost of financing, but rather as representing the implicit hurdle being added to GHG-intensive projects to account for the possibility that they may eventually have to purchase allowances or invest in other GHG-emission-reducing projects to offset their emissions. As a result, the LCOE values for coal-fired plants without CCS are higher than would otherwise be expected." Of course, what sort of cost adjustment is appropriate for carbon-emitting sources of electricity can be disputed, but there is some adjustment built into these numbers.

5) Wind and solar photovoltaics are expected to become cheaper ways of generating electricity over time, as you can see from comparing the 2019 and 2040 columns. But the locations for cost-effective use of wind resources are limited. And at least according to the U.S. Energy Information Administration, solar electricity will still be more costly than electricity from fossil fuels by 2040.

6) Meanwhile, the price of generating electricity from coal is projected to keep falling, too.