For economists, all efforts to face the tradeoffs when allocating scarce resource are part of the broader subject--like allocating the time of passengers when boarding airlines.

It's intuitively clear, at least if you mull it over a bit, that boarding a plane from front to rear will probably be the most time-consuming and thus inefficient method, because everyone in the back of the plane will be waiting in line while those in the front of the plane are getting seated. But at least for me, it is much less intuitive that what is that boarding a plane from rear to front may be the second-most time-consuming way. R. John Milne and Alexander R. Kelly explain why, and offer their own proposal, in "A new method for boarding passengers onto an airplane," recently published in the Journal of Air Transport Management (34, 93-100).

Milne and Kelly offer an improvement on the method of airline boarding discussed by Jason H. Steffen in his 2008 article, "Optimal boarding method for airline passengers," also in the Journal of Air Transport Management (v. 14, pp. 146-150). Steffen refers to earlier similations of passenger boarding which found that allowing passengers to board in random order actually was faster than the then-traditional back-to-front method. The key insight here that what slows down airline boarding is people sliding their luggage into overhead compartment and scooting in and out of seats (like when the person sitting by the window is last to arrive, so the middle and aisle occupants need to scoot out to accommodate that person). When an airplane is loaded from back to front, people end up standing in the aisles while these delays are happening in the back, and in the meantime, no one is getting settled in the middle seats. With random boarding, at least some people are getting settled throughout the plane at any given time, which is why it turns out to be faster.

Steffen's insight was that if airlines were to seat people in the window seats first, and also offer people enough room to hoist up their luggage to the overhead rack without getting in anyone else's way, then boarding could be much more rapid. Here's a figure from Milne and Kelly showing how the Steffen method would work. The diagram shows seats in a hypothetical plane with 20 rows, six seats per row, and the front of the plane at the top. The numbers show the order in which people would board. 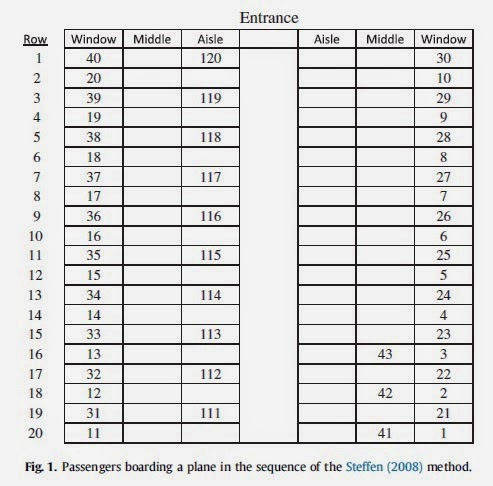 In this method, the first 10 passengers are every other window seat on the right of the plane. These folks walk in, load their luggage, and sit. They find it easy to load their luggage, because no one in the row immediately behind is getting on. Notice that with this method, 10 bags are being loaded simultaneously--which is 10 mini-delays being averted--and 10 window-seat passengers slide in without hindrance--which is 10 other mini-delays being averted. The next 10 passengers are every other row of the window seats on the left-hand-side of the plane, back to front. Then  back to the right-hand side for the remaining window seats on that side; back to the left-hand row for the remaining window seats; then on to the same method for middle seats and then aisle seats. In experimental studies that Steffen's later conducted, this method is about 25% faster than random boarding (which, remember, beats back-to-front boarding).

Milne and Kelly offer an additional twist: assign seats to passengers in a way that spreads carry-on baggage throughout the plane. Sort passengers into three categories: those with two bags, one bag, or no bags. In the Steffen method, it's possible that some of those who get on, say, with the first 10 passengers will have two carry-on bags, one bag, or no bags. It will take these people different amounts of time to get their luggage stowed and to get seated. But if all those with two bags got on at the same time, and took about the same amount of time to store their bags, then boarding could proceed more quickly. Based on mathematical simulations (with assumptions about how long it takes to walk up the aisle, store a bag, and so on), they find that their method is about 10 seconds faster for boarding a plane in than the Steffens method.

So does any of this really matter? After all, because these results are based on models and experiments of how people boarding planes behave, it's easy to come up with real-world issues that would need to be addressed. This plan is based on single travellers, but what about people travelling together or families travelling with children? How would airlines gather information about the number of carry-on bags people have: would you have to tell them your number of carry-on bags, or would the airline try to infer the number from other information about you (for example, a frequent flyer who will only be staying in another city for a day might be more likely to be a business traveler with a roll-along bag)? How would the airline communicate the boarding pattern to those at the gate: for example, would people's boarding pass have a number for boarding the plane, or would different lines be set up, or what?

Of course, people will never board planes with the sort of mechanical efficiency shown in these computer models. But changes in how airlines board their passengers have already started arriving, and more are probably on their way.

The potential cost savings for the airlines are real. Milne and Kelly cite estimates that it costs an airline about $30/minute when a plane is sitting on the ground. There are about 8.3 million U.S. domestic flights annually. If it's possible to save 2 minutes/flight with faster boarding times, then that's worth almost $500 million per year (that is, 8.3 million x 2 minutes x $30/minute).

The potential savings already have airlines tweaking their methods. Eric Chemi, writing at BloombergBusinessWeek, reviews some of these issues and notes: American Airlines spent two years studying its boarding process and landed on a randomized, zone-based system. Last year it introduced a tweak that gives a slightly higher priority to passengers who have no carry-ons for the overhead bin. United uses an “outside-in” boarding process by which people with window seats board ahead of those on the aisle."

Moreover, it's worth remembering that the results of economic analysis have affected airline behavior before. Of course, the deregulation of US airlines back in 1978 was encouraged by economic studies that showed how greater competition would lead to lower fares and more consumer choice. Last week, I posted an example of an economist arguing for improving competition in the U.S. airline market by letting foreign-owned airlines carry passengers in the domestic U.S.

But my personal favorite example of how work by an academic economist affected the day-to-day practices of the airlines is a 1968 paper by Julian Simon called "An Almost Practical Solution to Airline Overbooking." Back in 1968, if a flight was overbooked and you arrived after the seats were filled, you were just bumped to a later flight: no recourse, no compensation. Simon suggested that as passengers arrive for their flight, they would all be handed an envelope and a bid form, where they would write down the amount of money in exchange for which they would be willing to be bumped to a later flight. If the flight was overbooked, the airline would just open the envelopes and choose the low bidder.  Of course, Simon's method didn't literally come to pass (and remember, he called it an "almost practical solution), but the now-common practice of planes offering a free ticket on a later flight for those who were bumped was a way of implementing the concept.

Similarly, I expect that in the next few years, airlines will try to find practical ways to implement the suggestions of writers like Steffens, Milne, and Kelly. From the outside, I expect these new methods of boardeing  will sometime appear even more arbitrary than the current methods. But if they get everyone from the gate to being seated on the plane a little faster, I'm all for it.