U.S. Airline Deregulation: The Next Step

It has been possible to have fewer flights but more revenue passenger-miles because the average flight is fuller. The "load factor" which is calculated as the actual passenger-miles traveled as a proportion of the available seats, was 83.5% in 2013, up from 77% in 2005, and 70% in 2002. In other words, US airlines have been competing to jam more people into fewer flights.

This background is part of Kenneth Button's case for "Really Opening Up the American Skies," in the Spring 2014 issue of Regulation magazine. Button points out that while airline deregulation back in 1978 led to lower prices and additional service (though hub-and-spoke route systems), those patterns have been changing in recent years: the number of U.S. domestic routes has been contracting and airfares have stopped declining.   Button writes:

"The deregulation of the 1970s, by removing entry quantitative controls, led to a considerable increase in services. It also increased the capability of individuals to access a wider range of destinations from their homes via the hub-and-spoke system of routings that emerged. This pattern has been reversed since 2007. The largest 29 airports in the United States lost 8.8 percent of their scheduled flights between 2007 and 2012, but medium-sized airports lost 26 percent and small airports lost 21.3 percent. ...

The advent of jet and wide-bodied aircraft lowered costs in the 1960s and 1970s, and the 1978 Airline Deregulation Act caused the trend to continue in the 1980s and 1990s. Since then, real airline fares within the United States have largely plateaued;they fluctuate as fuel prices and economic growth oscillate and the temporary effects of mergers are felt. The challenge is to get the fare curve moving down again. The issue is not simply a matter of fares, but also the number and nature of services that are provided. People who no longer have ready access to air services are confronted with an infinite airfare—a fact not reflected in the airline airfare statistics."

What's the answer? Button argues that it's time for the next step in U.S. airline deregulation: that is, letting airlines from other countries enter the U.S.  market and deliver U.S. passengers between U.S. cities. He writes:


"In sum, the 1978 Airline Deregulation Act only partially liberalized the U.S. domestic airline market. One important restriction that remains is the lack of domestic competition from foreign carriers. The U.S. air traveler benefited from the country being the first mover in deregulation, and this provided lower fares and consumer-driven service attributes some 15–20 years before they were enjoyed in other markets; the analogous reforms in Europe only fully materialized after 1997. But the world has
changed, and so have the demands of consumers and the business models adopted by the airlines. ...  But remaining regulations still limit the amount of competition in the market and, with this, the ability of travelers to enjoy even lower fares and a wider range of services."

Back when U.S. airline deregulation was being considered in the 1970s, one of the power examples for advocates of deregulation was that if you looked at airfares between cities within a certain state--say, within Texas or within California--they were much lower than airfares between similar cities in different states. The reason was that airfares and routes on within-state flights weren't federally regulated, and so it could be seen that competition offered a better deal for customers. In a similar spirit, Button offers some examples of fares for European carriers like Ryanair or easyJet compared with U.S. carriers like Southwest or JetBlue. For flights of similar distance, the European airlines are often charging a lot less. 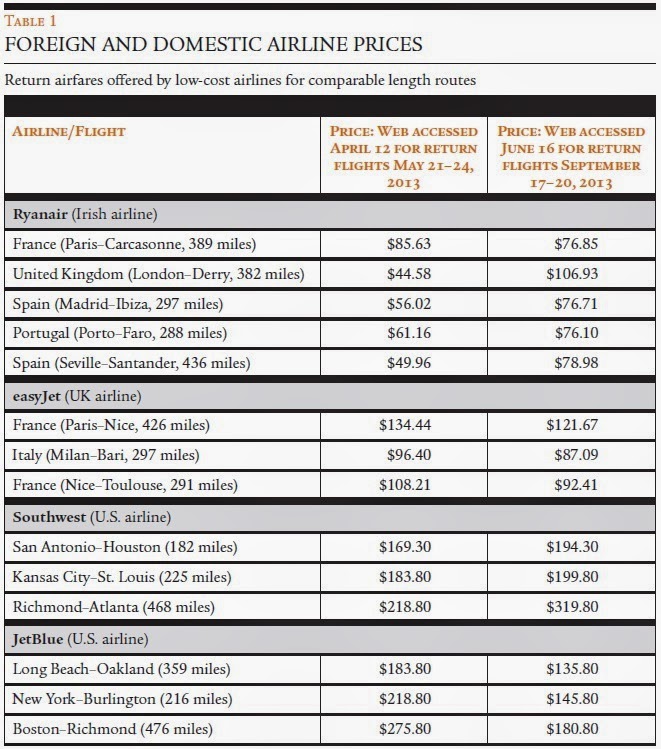 The objections to allowing foreign airlines into the U.S. domestic market tend to fall into two broad categories. One argument is that the foreign airlines will provide inferior service and don't have a sense of what U.S. customers want, so they won't attract much business. A cynic might answer that inferior service and ignorance about what customers are not exactly unknown characteristics among the current U.S. airlines. Also, while this concern over how foreign airlines might suffer financial losses must needs touch a tender chord of throbbing emotion in every American breast, frankly, the foreign airlines can look after themselves. The other argument is that the foreign airlines will be so successful that the workers of U.S. airlines will suffer. But most of the people working at airports, like baggage handlers and ground crew, will continue to be Americans. And the aftermath of the 1978 airline deregulation teaches that if more efficient practices and lower fares bring a new surge of airline customers, then the industry as a whole--and the American workers in the airline industry broadly defined--will expand.

My wife and I have three children. I favor more competition and lower airfares.