China's rate of economic growth has slowed from the stratospheric 10% per year that it averaged from 1980 through 2010 to a merely torrid 8% per year from 2011-2014, and perhaps even a little slower in 2015. Now that China is on the verge of being the world's largest economy, the question of its future growth matters not just for 1.3 billion Chinese, but for the global economy as a whole. Zheng Liu offers some insight into the slowdown in a short essay "Is China's Growth Miracle Over," published by as an "Economic Letter" by the Federal Reserve Bank of San Francisco (August 10, 2015). 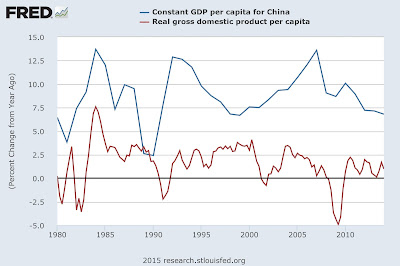 In the last few years, China's growth patterns have been heavily affected by a slowdown in its exports during the Great Recession and its aftermath, and by an enormous surge in debt. But over the longer  term, the key question is whether China's growth rate slows down. Liu offers a thought-provoking figure here with a comparison of China with Japan and South Korea. China's growth is shown by the rectangles and you can see, for example, that it's growth in 2014 was below the earlier levels from the last few decades. Japan's growth is shown by the red circles, and you can see how its growth fell from the 1960 to the 1970s, and more recently to the circles at the bottom right. Korea's growth in shown by the triangles, and again, you can see the decline in growth rate over time. 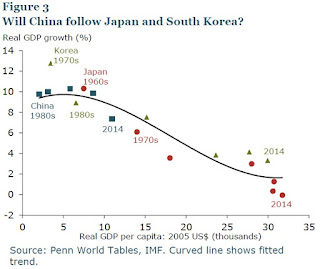 So is China's going to keep growing at a annual rate around 7%, or will it fall down to the 2-3% range? Here's the capsule case for pessimism, and then for optimism, from Liu.

This may appear to be quite a pessimistic scenario for China, but China’s long-term growth prospects are challenged by a number of structural imbalances. These include financial repression, the lack of a social safety net, an export-oriented growth strategy, and capital account restrictions, all of which contributed to excessively high domestic savings and trade imbalances. According to the National Bureau of Statistics of China, the household saving rate increased from 15% in 1990 to over 30% in 2014. High savings have boosted domestic investment, but allocations of credit and capital remain highly inefficient. The banking sector is largely state-controlled, and bank loans disproportionately favor state-owned enterprises (SOEs) at the expense of more productive private firms. According to one estimate, the misallocation of capital has significantly depressed productivity in China. If efficiency of capital allocations could be improved to a level similar to that in the United States, then China’s total factor productivity could be increased 30–50% ...

Despite the slowdown, there are several reasons for optimism. First, China’s existing allocations of capital and labor leave a lot of room to improve efficiency. If the proposals for financial liberalization and fiscal and labor market reforms can be successfully put in place, improved resource allocations could provide a much-needed boost to productivity. Second, China’s technology is still far behind advanced countries’. According to the Penn World Tables, China’s total factor productivity remains about 40% of the U.S. level. If trade policies such as exchange rate pegs and capital controls are liberalized—as intended in the reform blueprints—then China could boost its productivity through catching up with the world technology frontier. Third, China is a large country, with highly uneven regional development. While the coastal area has been growing rapidly in the past 35 years, its interior region has lagged. As policy focus shifts to interior region development, growth in the less-developed regions should accelerate. With the high-speed rails, airports, and highways already built in the past few years, China has paved the way for this development. As the interior area catches up with the coastal region, convergence within the country should also help boost China’s overall growth

I'm a long-term optimist about China's economic growth, both because I think it has been laying the basis for future growth by boosting education, investment, and technology, and also because China's economy as a whole economy (not just the richer coastal areas) still has a lot of room for catch-up growth. But China's economy has reached a size where it urgently needs better functioning from its banks and financial system, and in the shorter term, the problems of the financial system are likely to keep getting the headlines.
Posted by Timothy Taylor at 9:00 AM