The US Financial Sector in the Long-Run: Where are the Economies of Scale?

A larger financial sector is clearly correlated with economic development, in the sense that high-income countries around the world have on average larger markets for banks, credit cards, stock and bond markets, and so on compared with lower-income countries. But there are also concerns that the financial sector in high-income countries can grow in ways that end up creating economic instability (as I've discussed here, here, and here). Thomas Philippon provides some basic evidence on the growth of the US financial sector over the past 130 years in "Has the US Finance Industry Become Less Efficient? On the Theory and Measurement of Financial Intermediation," publishes in the
April 2015 issue of the American Economic Review (105:4, pp. 1408–1438). The AER is not freely available online, but many readers can obtain access through a library subscription.

Here's a figure from Philippon showing both measures of finance as a share of the US economy over the long run since 1886. 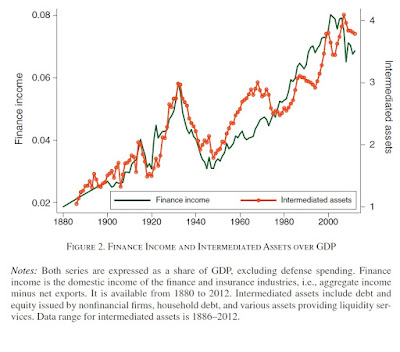 The orange line measured on the right axis is "intermediated assets," which measures the size of the financial sector as the sum of all debt and equity issued by nonfinancial firms, together with the sum of all household debt, and some other smaller categories. Back in the late 19th century, the US financial sector was roughly equal in size to GDP. By just before the Great Depression, it had risen to almost three times GDP, before sinking back to about 1.5 times GDP. More recently, you can see the financial sector spiking with the boom in real estate markets and stock markets in the mid-2000s at more than 4 times GDP, before dropping slightly. The overall trend is clearly up, but it's also clearly a bumpy ride.

The green line shows "finance income," which can be understood as a measure of the value added by firms in the financial sector. For the uninitiated, "value added" has a specific meaning to economists. Basically, it is calculated by taking the total revenue of a firm and subtracting the cost of all goods and services purchased from other firms--for example, subtracting costs of supplies purchased or machinery. In the figure, most of the "value-added" that measures  "finance income" includes all wages and salaries paid by a firm, along with any profits earned.

An intriguing pattern emerges here: finance income tracks intermediated assets fairly closely. In other words, the amount paid to the financial sector is more-or-less a fixed proportion of total financial assets. It's not obvious why this should be so. For example, imagine that because of a rise in housing prices, the total mortgage debt of households rises substantially over time, or because of rising stock prices over several decades, the total value of the stock market is up. Especially in an economy where information technology is making rapid strides, it's not clear why incomes in the financial sector should be rising at the same pace. Does a bank need to incur twice the costs if it issues a mortgage for $500,000 as compared to when it issues a mortgage for $250,000? Does an investment adviser need to incur twice the costs when giving advice on a retirement account of $1 million as when giving advice on a retirement account of $500,000? Shouldn't there be some economies of scale in financial services?

Philippon isn't the first to raise this question: for example, Burton Malkiel has asked why there aren't economies of scale in asset management fees here. But Philippon provides evidence that, for whatever reason, a lack of economies of scale has been widespread and long-lasting in the US financial sector.

Full disclosure: The AER is published by the American Economic Association, which is also the publisher of the Journal of Economic Perspectives, where I have worked as Managing Editor since 1986.
Posted by Timothy Taylor at 11:13 AM