US Mergers and Antitrust in 2014

Each year the Federal Trade Commission and and the Department of Justice Antitrust Division publish the Hart-Scott-Rodino Annual Report, which offers an overview of merger and acquisition activity and antitrust enforcement during the previous year. The Hart-Scott-Rodino legislation requires that all mergers and acquisitions above a certain size--now set at $75.9 million--be reported to the antitrust authorities before they occur. The report thus offers an overview of recent merger and antitrust activity in the United States. 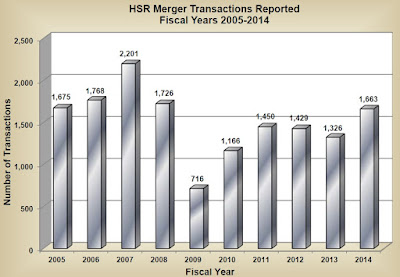 The report also provides a breakdown on the size of mergers. Here's what it looked like in 2014. As the figure shows, there were 225 mergers and acquisitions of more than $1 billion. 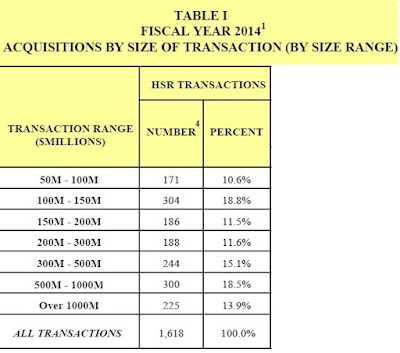 After a proposed merger is reported, the FTC or the US Department of Justice can request a "second notice" if it perceives that the merger might raise some anticompetitive issues. In the last few years, about 3-4% of the reported mergers get this "second request." This percentage may seem low, but it's not clear that it is too low. After all, the US government isn't second-guessing whether mergers and acquisitions make sense from a business point of view. It's only asking whether the merger might reduce competition in a substantial way. If two companies that aren't directly competing with other combine, or if two companies combine in a market with a number of other competitors, the merger/acquisition may turn out well or poorly from a business point of view, but it is less likely to raise competition issues.

Teachers of economics may find the report a useful place to come up with some recent examples of antitrust cases, and there are also links to some of the underlying case documents and analysis  (which students can be assigned to read). Here are a few examples. In the first one, a merger was questioned and called off. In the second, a merger was allowed only after a number of plants were divested, so as to allow competition to continue. The third case involved an airline merger in which the transaction was only allowed to proceed with provisions that required divestiture of gates and landing slots at a number of airports, thus opening the way for competition from other airlines.

In Jostens/American Achievement Group, the Commission issued an administrative complaint and authorized staff to seek a preliminary injunction in federal district court enjoining Jostens, Inc.’s proposed $500 million acquisition of American Achievement Corp. The Commission alleged that the acquisition would have substantially reduced quality and price competition in the high school and college class rings markets. Shortly after the Commission filed its administrative complaint, the parties abandoned the transaction. ...

In April 2014, the FTC also concluded its 2013 challenge to Ardagh Group SA’sproposed acquisition of Saint-Gobain Containers, Inc. The $1.7 billion merger would have allegedly concentrated most of the $5 billion U.S. glass container industry in two companies – the newly combined Ardagh/Saint-Gobain, and Owens-Illinois, Inc. These two companies would have controlled about 85 percent of the glass container market for brewers and 77 percent of the market for distillers, reducing competition and likely leading to higher prices for customers that purchase beer or spirits glass containers. The FTC filed suit in July 2013 to stop the proposed transaction. While the challenge was pending, Ardagh agreed to sell six of its nine glass container manufacturing plants in the United States to a Commission-approved buyer.

In United States, et al. v. US Airways Group, Inc. and AMR Corporation, the Division and the states of Texas, Arizona, Pennsylvania, Florida, Tennessee, Virginia, and the
District of Columbia challenged the proposed $11 billion merger between US Airways Group, Inc. (“US Airways”) and American Airlines’ parent company, AMR Corporation. On April 25, 2014, the court entered the consent decree requiring US Airways and AMR Corporation to divest slots and gates in key constrained airports across the United States. These divestitures, the largest ever in an airline merger, have allowed low cost carriers to fly more direct and connecting flights in competition with legacy carriers and have enhanced system-wide competition in the airline industry.