How Much Slack is Left in US Labor Markets?

When the US monthly unemployment rate topped out 10% back in October 2009, it was obvious that the labor market had a lot of "slack"--an economic term for underused resources. But the unemployment rate has been 5.5% or below since February 2015, and 5.0% or below since October 2015. At this point, how much labor market slack remains? The Congressional Budget Office offers some insights in its report, An Update to the Budget and Economic Outlook: 2016 to 2026 (August 23, 2016).

I'll offer a look at four measures of labor market slack mentioned by CBO: the "employment shortfall,"  hourly labor compensation, rates at which worker are being hired or are quitting jobs, and hours worked per week. The bottom line is that a little slack remains in the US labor market, but not much.

Here's a figure from the CBO measuring the employment shortfall in millions of workers. During the recession, the blue lines showing unemployment made up most of the employment shortfall. Now, it's pretty much all workers who would be expected to be working but are "out of the labor force," but are not counted as unemployed because they have stopped looking for work. 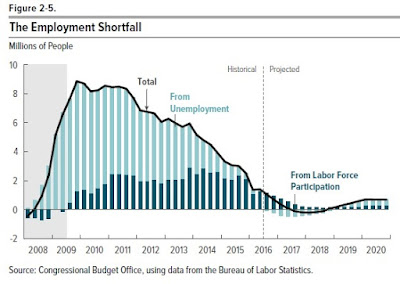 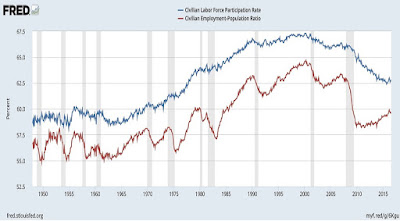 A second measure of labor market slack looks at compensation for workers (including wages and benefits). The argument here is that when labor market slack is low, the This figure from the CBO report shows the change in compensation with actual data through the end of 2015, and projections after that. There does seem to be a little bump in hourly labor compensation toward the end of 2015 (see here for earlier discussion of this point), so as data for 2016 becomes available, the question will be whether that increase is sustained. 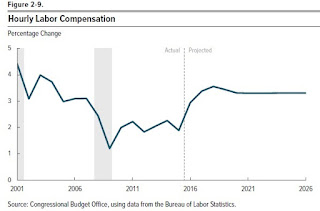 One more measure of labor market slack is the rate at which workers are being hired, which shows the liveliness of one part of the labor market, and the rate at which workers are quitting. The quit rate is revealing because when the economy is bad, workers are more likely to  hang onto their existing jobs. Both hiring and quits have largely rebounded back to pre-recession levels, as shown by this figure from the August 2016 release of the Job Openings and Labor Turnover Survey conducted by the US Bureau of Labor Statistics 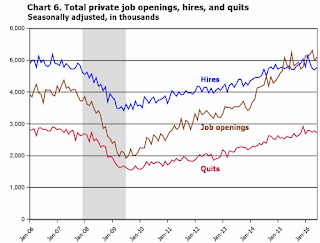 Finally, average hours worked per week is also a common measure of labor market slack. The CBO report notes that this measure has mostly rebounded back to its pre-recession level. Here's a figure from the US Bureau of Labor Statistics showing the pattern. 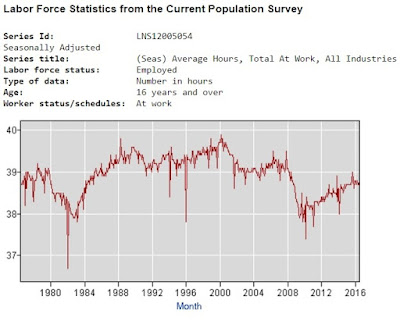 All economic news has a good news/bad news quality, and the fall in labor market slack is no exception. The good news is obvious: unemployment rates are down and wages are showing at lesat some early signs of rising. It wasn't obvious, back during the worst of the Great Recession in 2008-2009, how quickly or how much the unemployment rate would decline.  As one example of the uncertainty, the Federal Reserve announced in December 2012, that “this exceptionally low range for the federal funds rate will be appropriate at least as long as the unemployment rate remains above 6½ percent," along with some other conditions, to reassure markets that its policy interest rate would remain low.But then the unemployment rate fell beneath 6.5% in April 2014, and the Fed decided it wasn't yet ready to start raising interest rates, so it retracted its policy from less than 18 months earlier.

The corresponding bad news is that whatever you dislike about the labor market can't really be blamed on the Great Recession any more. So if you're worried about issues like a lack of jobs for low-wage labor, too many jobs paying at or near the minimum wage, not enough on-the-job training, not enough opportunities for longer-term careers, loss of jobs in sectors like manufacturing and construction, too much part-time work, inequality of the wage distribution, one can no longer argue that the issues will be addressed naturally as the economy recovers. After all, labor market slack has now already declined to very low levels.
Posted by Timothy Taylor at 9:00 AM