Snapshots of US Family Wealth

Wealth is not income. Economists sometimes say that "wealth is a stock, income is a flow." They mean that wealth is accumulated over time, and includes assets and debts. Income is what flows in during a give period of time, often measured during a week or a year. The most prominent data source for estimates of US family wealth is the Survey of Consumer Finance, conducted once every three years by the Federal Reserve. Data from the 2013 survey is the most recent available, and the the Congressional Budget Office has released a short report made up of figures and short commentaries showing Trends in Family Wealth, 1989-2013. Here are some snapshots:

The overall wealth of US families totalled about $67 trillion in 2013. As the figure shows, this total has more-or-less doubled since about 1995. Most of increase is attributable to a rising total for the top 10%, which means that the wealth distribution is clearly becoming more unequal over time. 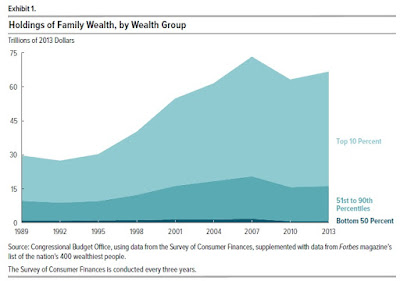 Of course, no one should expect the distribution of wealth to be anything near equal. For example, those who are in their 60s, relatively near the end of their work life, really should have more in retirement accounts and home equity than, say, those in their early 20s--who may well have negative wealth due to student loans. Here's a breakdown of patterns in average wealth per family, divided up by age. I suspect that the reason that average wealth for the age 50-64 group climbed so rapidly during the early 2000s and then plunged during the recession has to do with this group being more affected by the rise and then the fall of real estate prices and the stock market. As one would expect, the average family in the under-35 age group has little wealth. 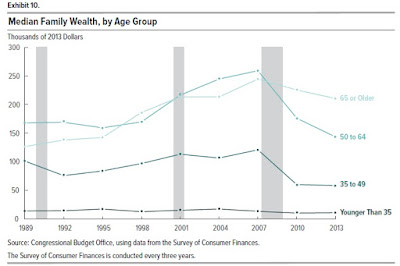 A related factor will be education level, given that education is positively correlated both with higher incomes from year to year (and thus a higher ability to save) and also with a greater ability to plan for the future. Here's the breakdown of wealth per family by education level. 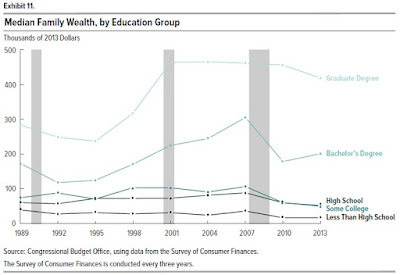 In other words, families that have graduate degrees and are over 65 have seen a sharp rise in wealth. Families that are under-35 and with lower levels of education don't tend to have much wealth. This CBO report is really just providing data: it doesn't seek to analyze or explain underlying causes. But here's a breakdown of family wealth by percentile. 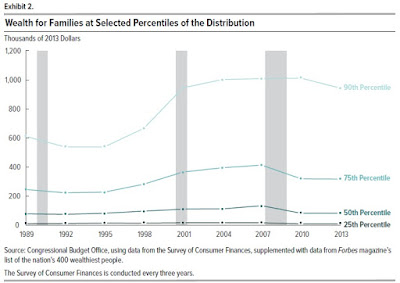 A family in the 90th percentile of the wealth distribution has seen a significant rise over time, although less than a doubling. A family in the 75th percentile has had a more modest rise since the early 1990s. Family wealth levels at the 50th and 25th percentiles haven't changes much in the last 25 years. Given that the rise in total wealth is so much less than a doubling at all of these percentiles, and given that total family wealth doubled from 1995 to 2013, there must be some percentiles where there is more than a doubling. Presumably these are the share of wealth at the very top of the wealth distribution, perhaps the 95th or 99th percentile. At some level, this result is unsurprising. Run-ups in stock prices and housing prices tend to raise the wealth of those who own the most of these assets.
Posted by Timothy Taylor at 9:00 AM