The Allure of Catastrophe Bonds

There are at least two big problems inherent in the way that the world has become accustomed to dealing with natural disasters in low- and middle-income , including of weather-related, disease-related, and geologically-related varieties. One problem is that disaster aid from donor nations often arrives too little and too late. The other problem is that it often becomes apparent, in considering the aftermath of a disaster, that relatively inexpensive precautionary steps could have substantially reduced the effects of the disaster. "Catastrophe bonds" (to be explained in a moment, if you haven't heard of them) offer a possible method to ameliorate both problems. Theodore Talbot and Owen Barder. provide an overview in "Payouts for Perils: Why Disaster Aid Is Broken, and How Catastrophe Insurance Can Help to Fix It" (July 2016, Center for Global Development Policy Paper 087). 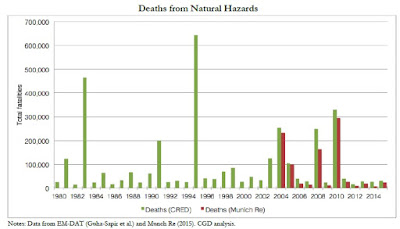 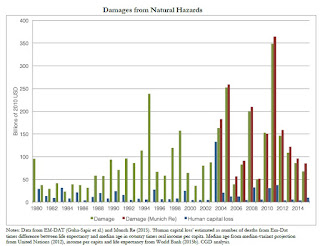 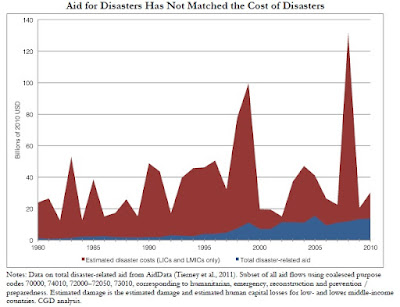 But insufficient funds are only part of the problem, as Talbot and Barder spell out in some detail. Aid is often too slow. Here is a sampling of their comments:


"As Bailey (2012) has set out in a detailed study of the 2011 famine in Somalia, slow donor responses meant that what might have been a situation of deprivation descended into mass starvation. As he points out, this happened even though early-warning systems repeatedly notified the global public sector about the emergency ... Mexican municipalities that receive payouts from Fonden, a natural disaster insurance programme, grow 2-4% faster than those that also experience a hazard but did not benefit from insurance cover, ultimately generating benefit to cost ratios in the range of 1.52 to 2.89."

"For example, food aid is often the default mechanism donors use to address food shortages, even though it would often be cheaper, faster, and much more effective to provide cash to governments or directly to households, enabling markets to react ..."

"Yet examining data on aid flows from 1973 to 2010 reported to the OECD by donors indicates that less than half a cent of the average dollar– just 0.43% – of disaster-related aid has been labelled as earmarked for reducing the costs future hazards (“prevention and preparedness”, which we refer to elsewhere using the standard label “disaster risk reduction”). Put differently, the vast majority of our funding is devoted to delivering assistance when hazards have struck, not reducing the losses from hazards or preventing them from evolving into disasters. ... For humanitarian response, a study funded by DFID, the UK aid agency, evaluated $5.6 million-worth of preparedness investments in three countries– such as building an airstrip in Chad for $680,000 to save $5.2 million by not having to charter helicopters in the rainy season– and concluded that the overall portfolio of investments had an ROI of 2.1, with time savings in faster responses ranging from 2 to 50 days."

This line of thought leads Talbot and Barder to a discussion of catastrophe bonds, which they describe like this:

"[T]he principle is simple: rather than transferring risk to a re-insurer, an insurance firm creates a single company (a “special purpose vehicle”, or SPV) whose sole purpose is to hold this risk. The SPV sells bonds to investors. The investors lose the face value of those bonds if the hazard specified in the bond contracts hits, but earn a stream of payments (the insurance premiums) until it does, or the bond’s term expires. This gives any actor – insurer, re-insurer, or sovereign risk pool like schemes in the Pacific, Caribbean and Sub-Saharan Africa, which we discuss below – a way to transfer risks from their balance sheets to investors.

Here's a graph that shows the amount of catastrophe bonds issued in the last two decades. . 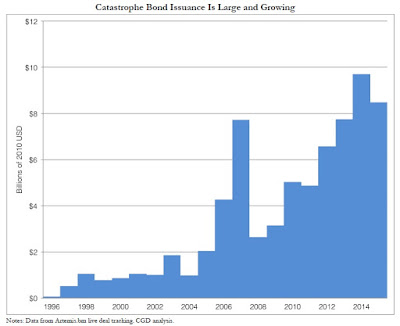 Again, those who buy a catastrophe bond hand over money, and receive an interest rate in return. If a catastrophe occurs, then the money is released. Investors like the idea because the interest rates on catastrophe bonds (which work a lot like insurance premiums) are often higher than what's currently out there in the market, and also that the timing of the risk of natural disasters occurring is not much correlated with other economic risks (which makes cat bonds a useful choice in building a diversified portfolio). Countries like having definite access to a pool of financial capital. Those who would be donating to disaster relief can instead help by subsidizing the purchase of these bonds.

There are obvious practical questions with catastrophe bonds, which are being slowly worked out over  time. One issue is how to define in advance what counts as a catastrophe where money will be released.  Talbot and Barder expain the choices this way:


Tying contracts to external, observable phenomena such as Richter-scale readings for the extent of earthquakes or median surface temperature for droughts means that risk transfer can be specifically tailored to the situation. There are three varieties of triggers: parametric, modelled-loss, and indemnity. Parametric triggers are the easiest to calculate based on natural science data– satellite data reporting a hurricane’s wind speed is transparent, publicly available, and cannot be affected by the actions of the insured or the insurer. When a variable exceeds an agreed threshold, the contract’s clauses to payout are invoked. Because neither the insured nor the insurer can affect the parameter, there is no cost of moral hazard, since the risks– the probabilities of bad events happening– cannot be changed. Modelled losses provide estimates of damage based on economic models. Indemnity coverage is based on the insurance claims and loss adjustment and are the most expensive to operate and take the most time to pay out (or not).

Several organizations are now operating to provide insurance against catastrophes different ways. There's the Pacific Catastrophe Risk Assessment and Financing Initiative, which covers Vanuatu, Tonga, Marshall Islands, the Cook Islands, and Samoa, and where what the countries pay is subsidized by World Bank and Japan. There's the Caribbean Catastrophe Risk Insurance Facility, covering 16 countries in the Carribbean. There's the African Risk Capacity, which is just starting out and has provided natural disaster coverage to only handful of countries, so far, including Niger, Senegal, Mauritania and Kenya.

These organizations are still a work in progress. As a general statement, it seems fair to say that these organizations have been more focused on how to assure quick payments, rather than on linking the amounts paid to taking preventive measures that can ameliorate the effects of future disasters. As an example of a success story, after Haiti's earthquake in 2010, apparently $8 million in disaster relief was available from the common insurance pool 19 just hours after the quake struck. It seems theoretically plausible that countries should be able to pay lower returns on their catastrophe bonds if they have taken certain steps to limit the costs of disasters, but negotiating the specifics is obviously tricky. There are also questions of how to spell out the "trigger" event for a catastrophe event involving pandemics, where a physical trigger like wind-speed or size of earthquake won't work.

Catastrophe bonds have their practical problems and limits. But they can play a useful role in planning ahead for natural disasters, which has a lot of advantages over reacting after they occur. For those interested in the economics of natural disasters, here are a couple of earlier posts on the subject:

Posted by Timothy Taylor at 9:14 AM