Africa's cities are growing rapidly, which presents both an environmental problem and a policy opportunity. The problem is that many of these cities already have severe environmental issues. The opportunity is that because these cities are much smaller than they will be in a few decades, there are opportunities now to guide and shape their growth in ways that can be much more cost-effective than trying to clean up the mess after it has already happened. Roland White, Jane Turpie, and Gwyneth Letley explore these issues in a World Bank report, Greening Africa's Cities : Enhancing the Relationship between Urbanization, Environmental Assets, and Ecosystem Services (May 2017).

On the patterns of urbanization in Africa, they write:

"Urbanization in Africa began later than in any other global region and, at a level of about approximately 40%, Africa remains the least urbanized region in the world. However, as indicated in Figure 3, this is rapidly changing: SSA’s cities have grown at an average rate of close to 4.0% per year over the past twenty years, and are projected to grow between 2.5% and 3.5% annually from 2015 to 2055 (Figure 3). By contrast, globally the average annual urban population growth rate is projected to be between 1.44% and 1.84% from 2015 to 2030 (WHO 2015). From an environmental perspective, this has two important implications. On the one hand, most of Africa’s urban space has yet to emerge. Much of the area which will eventually be covered by the built environment has not yet been constructed and populated. Crucial natural assets – and significant biodiversity – thus remain intact in areas to which cities will eventually spread. On the other hand, this is changing quickly: pressures on the natural environment in and around cities are escalating steadily and these assets are increasingly under serious threat." 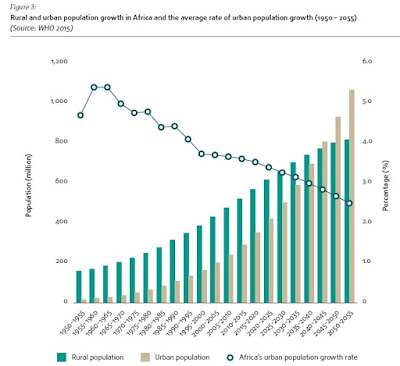 The existing environmental hazards levels in many African cities are often severe. They write: "For the entire region the proportion of urban residents with access to sanitation was estimated to be only 37% in 2010. Solid waste coverage also remains very limited with collection rates for many African cities at below 50% ..."

Here's a figure showing particulate concentrations in a range of cities. You think some cities in China have problems with air pollution? On this measure, a number of cities in Africa are considerably worse. 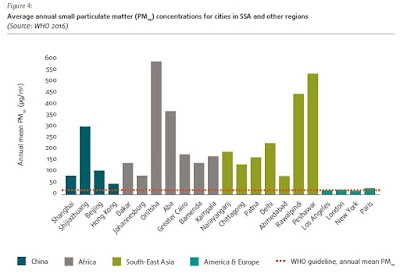 It's not a surprise that the health toll from these environmental pollutants is severe. In a number of countries in sub-Saharan Africa, the estimates of total welfare losses due to high air pollution are often in the range of 5% of GDP.  Here's a table showing estimates of premature deaths from various risk factors. For unsafe water and sanitation, the estimates of premature deaths are falling. For household and ambient air pollution, estimated deaths are rising.

There's no secret about the solutions here, and White, Turpie and Letley lay them out in some detail. Protect aquatic ecosystems like rivers and marshes. Avoid spreading pollution through stormwater runoff. Collect and treat sewage. Limit sources of air pollution. Preserve some greenspace. Don't build in places that are going to flood every few years. Such a list of policy steps can easily be expanded. Again, the goal is not to limit or hinder the urbanization of countries in sub-Saharan Africa, but only to guide it in more environmentally friendly directions. But the governance issues are severe. The authors write:


"Cities need to strengthen the institutions on which effective green urban planning and management rest by addressing structural limitations, accountability and capacity constraints. ... It is also important to recognize that the widespread planning failures evident in African cities are, in essence, a symptom of institutional weakness. In a “greening” context, green urban planning fails to emerge because African urban management institutions lack the capacity to generate such plans, and,
whether or not they are environmentally sensitive, the plans that are produced are seldom implemented or enforced. While the strengthening of government institutions is key, it is also perhaps one of the most challenging issues to address. ... Finally, the green urban development agenda needs to be better financially resourced. In the context of the limited fiscal devolution characteristic of cities in many African countries, there is a very substantial agenda here."

The authors of the report are clear-eyed about these problems, but the report is nonetheless infused with a can-do spirit, and features a number of encouraging stories. I hope I am wrong, but I confess that I am not optimistic that most of Africa's cities will rise to meet these environmental challenges.

For those interested, a couple of other recent posts on sub-Saharan Africa are: