It always takes a couple of years for the Internal Revenue Service to publish detailed tax statistics. In the Summer 2017 Statistics of Income Bulletin, Justin Bryan provides and overview of "High-Income Tax Returns for Tax Year 2014."

"For Tax Year 2014, there were almost 6.3 million individual income tax returns with an expanded income of $200,000 or more, accounting for 4.2 percent of all returns filed for the year. Of these, 9,692 returns had no worldwide income tax liability. This was a 24.2-percent decline from the number of returns with no worldwide income tax liability for 2013, and the fifth decrease in a row since reaching an all-time high of 19,551 returns in 2009. This article presents detailed data for high-income returns for 2014 and summary data for the period 1977 to 2013."

The report has lots of detail on patterns in these tax returns. Here, I'll focus on two points: the actual income taxes paid by different groups, and what's going on with those who have over $200,000 in income, but don't owe anything in income taxes. 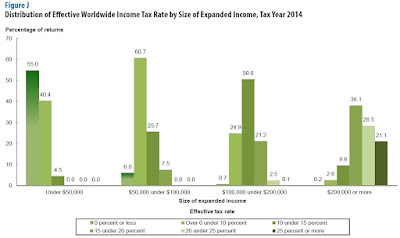 High-income, zero tax returns have often been about 0.1-0.2% of all tax returns, with the higher values falling in recession years. However, this value spiked up during the Great Recession, and only by 2014 had it fallen back in to the usual historical range. 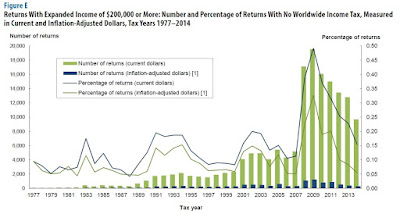 What's happening with this group? Bryan breaks down what provisions of the tax code that have the biggest effect in reducing the taxes owed for this group, and reports:

The small number of those who have high incomes but no income tax don't bother me much. It's a big country. A few rich people will put all their wealth into tax-free bonds. Some will have a few years of making very large charitable contributions, or very high medical expenses. Some will have earned much of their income in another country, and so pay income taxes there. When you hear about high-income people who don't pay income tax, it's pretty much always a situation with exceptional circumstances, and certainly not a general rule.
Posted by Timothy Taylor at 11:28 AM