The Challenge of Electrifying Africa

\Electricity is the bloodstream of modern economies: powering lights, cooking, heating/cooling, motors, information technology,  and more. Conversely, the lack of electrification across countries of sub-Saharan Africa is an anchor holding back their economic future. Simone Tagliapietra lays out some of the issues in "Electrifying Africa: how to make Europe’s contribution count," written as a Bruegel Policy Contribution (Issue #17, June 2017). He writes: 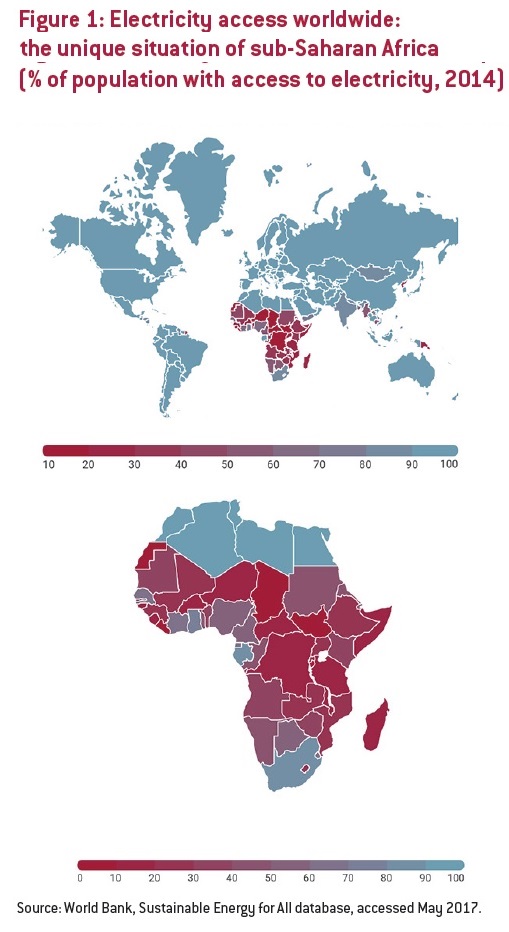 Perhaps just as disturbing as the lack of electricity across many areas of Africa is that even the seemingly aggressive plans in place--essentially, to triple electricity capacity by 2030--would lead to less than half of what is needed to provide provide full access to Africa's population at that time (leaving aside the question of what quantity will be available on a per capita basis). Tagliapietra writes:

"The jump in capacity [forecast for 2030] is projected to be based mainly on hydropower (35 percent of total  capacity in 2030) and gas (27 percent), plus oil (16 percent), coal (10 percent), solar photovoltaic (6 percent), geothermal (2 percent), biomass (2 percent) and wind (2 percent). Such a development lacks ambition, both quantitatively and qualitatively. From the quantitative perspective, reaching a level of total electrical capacity of 167 gigawatts (GW) by 2030 would not be sufficient to ensure access to electricity to all people in sub-Saharan Africa. The electrical capacity of sub-Saharan Africa would need to be expanded up to 400GW by 2030 in order to guarantee energy access to all."

Of course, there are arguments about how this expansion of electrical capacity should happen. There are on-grid methods like expanding hydropower, which does not emit greenhouse gases, but if done at large scale implies large dams that pose their own environmental and social challenges There are proposals for widespread use of off-grid or mini-grid sources, from renewables to diesel generators. I'm open to all kinds of proposals, as long as the plausible addition to electrical capacity is genuinely large--a multiple of existing levels.

The current electricity utilities across Africa are not financially sustainable,and aren't up for this job. "Sub-Saharan African electricity utilities are currently simply not financially sustainable. The seminal study by Trimble et al (2016) showed that across sub-Saharan Africa only the utilities in the Seychelles and Uganda fully cover their operational and capital expenditures. All other sub-Saharan African utilities run in quasi-fiscal deficit (ie defined as the difference between the actual revenue collected and the revenue required to fully recover the operating costs of production and capital depreciation), and thus need to be subsidised by the state."

So the focus has been on outside sources of finance. The amounts involves are not earthshaking in a global context. "Enerdata (2017) estimates that from 2015 to 2030, sub-Saharan Africa will need around $500 billion in investment just to scale-up electricity generation. An equal amount of investment will be needed to scale-up electricity transmission and distribution lines. About $1 trillion by 2030 (or about $70 billion per year) will thus be needed to expand sub-Saharan Africa’s electricity sector in order to ensure universal access to electricity by 2030."

Where might that $70 billion per year come from? One source of funds could easily be a reallocatino within a number of countries in sub-Saharan Africa. At Tagliapietra points out, "Sub-Saharan African countries spend about US$ 25 billion each year in energy. This substantial amount of budgetary resource is mainly used to subsidise inefficient and wasteful electricity utilities and, in certain cases, to subsidise old forms of energy, such as kerosene. Redirecting these resources into productive energy investments would be a vital step in reshaping sub-Saharan Africa’s energy systems."

In recent years, about one-third of the addition to Africa's electrical capacity has come from Chinese-based firms.  The US government launched a  Power Africa initiative, working with a number of intenational agencies, back in 2013. Congress approved financial support for the program unanimously in February 2016, based on a combination of a worthy goal and the opportunities for US exporters to provide goods and services in support of African electrification. A chunk of Tagliapietra's article is about how Europe might create a parallel initiative.  Of course, a mass-scale expansion of electricity is an issue where financial resources are necessary, but not sufficient. Political leadership within nations of Africa will  need to play a central role, too.

Those interested in issues relating to the countries of sub-Saharan African might also want to check out these relatively recent posts: