"Global value chains often involve numerous cross-border operations, conducted either `intra-firm,' that is, between firms related through ownership or control, or between unaffiliated firms at `arm’s-length.'" The World Bank explains this difference in "Arm’s-Length Trade: A Source of Post-Crisis Trade Weakness," which appears as a "Special Focus" chapter in Global Economic Prospects: A Fragile Recovery (June 2017). The chapter begins:


"Trade growth has slowed sharply since the global financial crisis. Based on U.S. trade data, arm’s-length trade—trade between unaffiliated firms—accounts disproportionately for the overall post-crisis trade slowdown. This is partly because arm’s-length trade depends more heavily than intra-firm trade on sectors with rapid pre-crisis growth that boosted arm’s length trade pre-crisis but that have languished post-crisis, and on emerging market and developing economies (EMDEs), where output growth has slowed sharply from elevated pre-crisis rates. Unaffiliated firms may also have been hindered more than multinational firms by constrained access to finance during the crisis, a greater sensitivity to adverse income and exchange rate movements, heightened policy uncertainty, and their typical firm-level characteristics."

Here's are the growth rates of US imports and exports for arm's-length and intra-firm trade in recent years. Detailed international data with a similar breakdown isn't available, although a similar pattern seems to hold in the research that has been done. 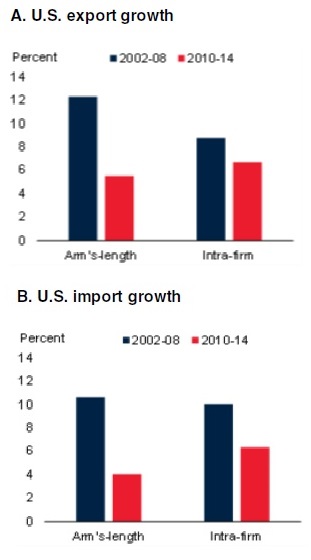 An extraordinarily high share of US trade happens through a relatively small number of firms. For example, Andrew B. Bernard, J. Bradford Jensen, Stephen J. Redding, and Peter K. Schott explained this point  10 years ago in "Firms in International Trade," in the Summer 2007 issue of the Journal of Economic Perspectives: "Yet engaging in international trade is an exceedingly rare activity: of the 5.5 million firms operating in the United States in 2000, just 4 percent were exporters. Among these exporting firms, the top 10 percent accounted for 96 percent of total U.S. exports."

These big players in international trade face a choice: import and export from affiliated firms, which often own pieces of each other, or import and export from unaffiliated firms on an arm's-length basis. The obvious advantage of the first approach is that when operating across national borders, there are likely to be conflicts and issues about  pricing, costs, timeliness, quality, transfers of technology and resources, and more. Addressing such issues on an ongoing basis with an affiliated firm may be more streamlined and easier than, say, trying to sue some other firm in the courts of its home country. The World Bank report notes (citations omitted):


"In practice, multinationals employ intra-firm and arm’s-length transactions to varying degrees. In 2015, intra-firm transactions are estimated to have accounted for about one-third of global exports. Vertically integrated multinational companies, such as Samsung Electronics, Nokia, and Intel, trade primarily intrafirm. Samsung, the world’s biggest communications equipment multinational, has 158 subsidiaries across the world, including 43 subsidiaries in Europe, 32 in China and 30 in North and South America. Other multinationals, such as Apple, Motorola, and Nike, rely mainly on outsourcing, and hence on arm’s-length trade with non-affiliated suppliers."

In a time when international trade faces a relatively high degree of suspicion, it's useful to be clear on just what is involved. When it comes to trading raw materials like energy or metals, or basic manufactured goods like textiles, or exporting to emerging markets, then arm's length trade is common. But a lot of the prominent, productive, and dynamic firms in the US and around the world are tied into international networks of intra-firm trade and global supply chains. If US policymakers put US firms at a disadvantage in accessing and using those global supply chains, those US firms will be at a disadvantage against their global competitors.

Posted by Timothy Taylor at 9:46 AM