Tally Sticks and the Fundamentals of Money

Do you know the true story of how a careless clerk, while burning up some outdated money, caused the Great Fire of 1834 which destroyed both Houses of the British Parliament, along with large portions of the Palace of Westminster? Tim Harford tells the tale in "What tally sticks tell us about how money works" (BBC News, July 10, 2017).

In this case, the outdated money takes the form of "tally sticks." As Harford explains:


The artefacts in question were humble sticks of willow, about eight inches (20cm) long, called Exchequer tallies. The willow was harvested along the banks of the Thames, not far from the Palace of Westminster in central London. ... Tallies were a way of recording debts with a system that was sublimely simple and effective. The stick would contain a record of the debt, for example: "£9 4s 4d from Fulk Basset for the farm of Wycombe". Fulk Basset was a Bishop of London in the 13th Century. He owed his debt to King Henry III.

Now comes the elegant part. The stick would be split in half, down its length from one end to the other. The debtor would retain half, called the "foil". The creditor would retain the other half, called the "stock" - even today, British bankers use the word "stocks" to refer to debts of the British government. Because willow has a natural and distinctive grain, the two halves would match only each other.

Of course, the Treasury could simply have kept a record of these transactions in a ledger somewhere. But the tally stick system enabled something radical to occur. If you had a tally stock showing that Bishop Basset owed you £5, then unless you worried that he wasn't good for the money, the tally stock itself was worth close to £5 in its own right.
If you wanted to buy something, you might well find that the seller would be pleased to accept the tally stock as a safe and convenient form of payment. So the tally sticks themselves became a kind of money, a particular sort of debt that could be traded freely, circulating from person to person until it utterly separated from Bishop Basset and a farm in Wycombe.


Here are a few pictures of tally sticks: the first is from Harford's article, which shows accounts accounts of the bailiff of Ralph de Manton of Ufford Church in Northampton, circa 1299.The second is from a short article by Frank J. Swetz and Victor J. Katz, "Mathematical Treasures - English tally sticks," Convergence (January 2011). The inscription on that tally stick shows the name of William de Costello, who was Sheriff of London in 1296. 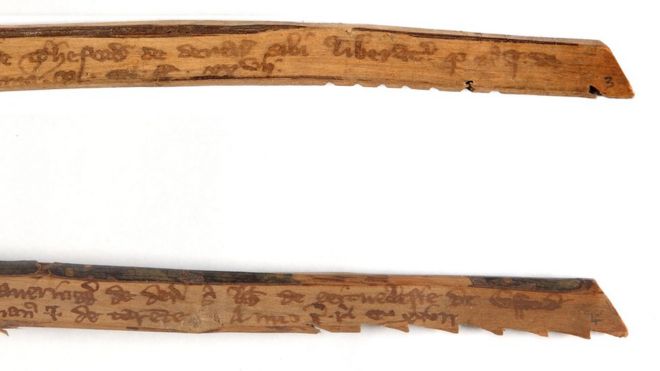 Of course, making marks on a stick or bone to keep a record of days or lunar cycles or livestock dates back millennia. The specific idea of tally sticks to keep track of debt dates back hundreds of years; in one telling, they were invented by King Henry the First, son of William the Conqueror, when he became King in 1100 AD.  Moreover, when a tally stick was split, it was divided into two different lengths, with the debtor literally receiving the short end of the stick.

Tally sticks were a highly successful monetary innovation, in the sense that they were used for centuries. They offer a demonstration of the idea that money, at its root, is something that can be stored and then accepted for purchases: as the textbooks say, money is a medium of exchange, a store of value, and a unit of account. They also demonstrate that money can be created by private actors, although textbooks typically emphasize the role of banks in creating money in the modern economy.

The punchline to the story of the tally sticks happens in 1834. Tally sticks had fallen out of use, and apparently there were no historians or museum curators nearby, so a decision was made to burn several large cartloads of remaining tally sticks. Thanks to a "senile Housekeeper and careless Clerk of Works," the fire got loose and roared through the Palace of Westminster, destroying the House of Commons and the House of Lords. It was the largest fire in London between the Great Fire of 1666 and the devastation of the Blitz during War II.