The interaction of a bubble in real estate prices with the banking and financial sector drove the US economy into the Great Recession. For an overview of how the US housing market is faring a decade after dysfunctions in housing market finance helped bring on the Great Recession that started in 2007, a useful starting point is The State of the Nation's Housing 2017, by the Joint Center for Housing Studies of Harvard University.

Here's the pattern of overall US housing prices: adjusted for inflation, home prices are about 30% above their level in 2000, but still below where they were at the peak of the housing bubble in 2006. 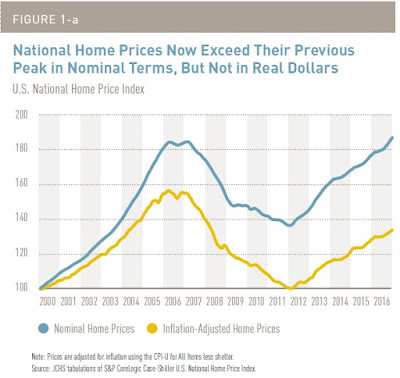 Perhaps not surprisingly, given that pattern, even ten years after the start of the financial crisis in 2007, there there are millions of Americans who are still "underwater" on their mortgages: that is, what they owe is more than what the home would sell for: "According to CoreLogic, the number of households underwater on their mortgages dropped from 4.3 million in 2015 to 3.2 million in 2016, reducing their share of all homeowners from 8.4 percent to 6.2 percent. ... Despite this progress, the share of homeowners with negative equity in some markets is still more than double the national rate. For example, 16.1 percent of homeowners in the Miami metro area were underwater on their mortgages in 2016, along with 15.5 percent in Las Vegas and 12.6 percent in Chicago. At the other extreme, only 0.6 percent of owners in the San Francisco metro area had negative equity."

Comparisons like these help to emphasize that price patterns have been VERY different across US housing markets. For example, here's one figure comparing the rise in home prices in the  ten highest-cost metro areas, compared to the lowest-cost areas and the US average. Clearly, the bubble in housing prices was much more extreme in these high-cost markets. It's also striking that housing prics in the high-cost markets were roughly double the national average in 2000, but more like triple the national average in 2016. 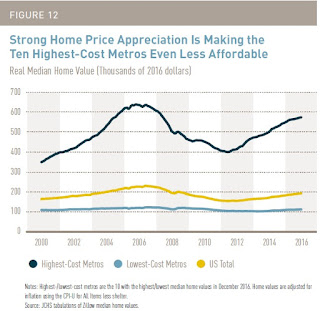 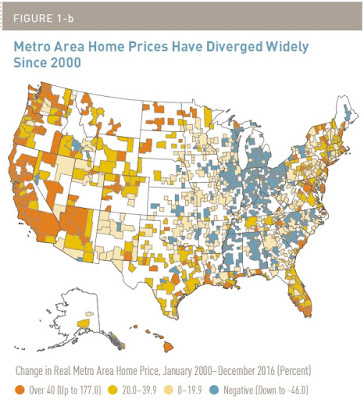 One of my takeaways here is that the affordability of housing is in some ways a regional and even a local issue. Whether housing is "unaffordable" is commonly measured by using a rule-of-thumb like the share of people in a given market who could afford the median-priced house if they spent no more than 30% of their income on housing. By this measure, a very high proportion of households at or below the poverty line will face a problem of unaffordable housing in pretty much every real estate market. But in the markets where housing prices are highest and have been rising most quickly, a substantial share of middle-class families can face housing affordability issues, too.

I have no problem with federal programs to help those at or near the poverty line afford  necessities of life like food, medical care, housing, and so on. But it's not clear that federal programs are appropriate to help those who are not poor, but face an affordability problem because they live in a region with a high cost of housing. It's not clear why those not clear why those who live in Pocatello or Dubuque or Detroit should pay taxes to subsidize the higher cost of living in south Florida or southern California.

In addition, one key reason why housing prices are so high in certain regions is that local rules can make it costly and time-consuming to build. In short, many of the areas with high housing prices have, to a substantial extent, brought those high costs on themselves by the ways in which they regulate and limit construction of new housing. Again, federal programs to help those with very low incomes is one thing, but when a local area or region has helped to create its own high housing costs, that same local areas or region should also have most of the responsibility for addressing the affordability consequences of those decisions.

The theme that housing construction has been relatively slow surfaces in the report in a number of places: "A variety of factors may be holding back a more robust supply response. Labor shortages are a key constraint, reflecting both the substantial drop in the construction workforce following the housing bust and the lower number of young workers entering the industry. In addition, regulatory and stricter financing requirements have limited the supply of land available for both single- and multifamily housing construction. In combination, these forces raise development costs and make it less feasible to build smaller homes for first-time buyers and rental units affordable to low- and moderate-income households."

For example, the blue line in this figure shows the "vacancy rate," which is quite low. The yellow bars show how many new houses have been constructed in the previous 10 years, which is also very low.

Similarly, the vacancy rate for rental apartments is also quite low, and rents are rising in most metro areas. 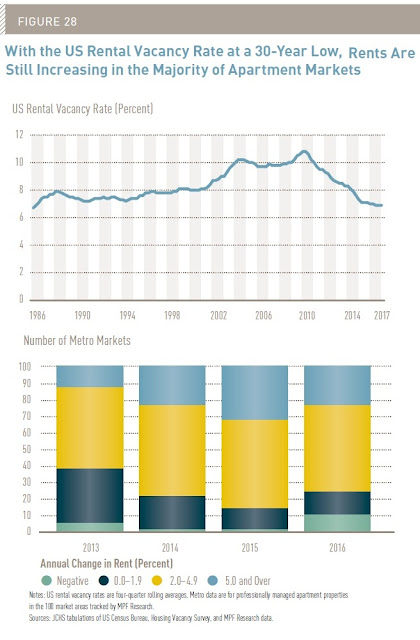 With low vacancy rates for housing and, at least in certain areas, very high prices, one would expect to see a resurgence of construction.  But in a number of local markets, efforts to build additional housing stock is held back substantially by the conditions demanded by existing home-owners and imposed in their name by local regulators.