Cryptocurrencies like Bitcoin have many interesting properties as financial assets, but are they ever likely to become money? The Bank for International Settlements (BIS) devotes Chapter V of its Annual Report 2017-18 (released June 24, 2018) to the topic "Cryptocurrencies: looking beyond the hype."  Here's the main thrust of the argument:


"[T]he essence of good money has always been trust in the stability of its value. And for money to live up to its signature property – to act as a coordination device facilitating transactions – it needs to efficiently scale with the economy and be provided elastically to address fluctuating demand. ... The chapter then gives an introduction to cryptocurrencies and discusses the economic limitations inherent in the decentralised creation of trust which they entail. For the trust to be maintained, honest network participants need to control the vast majority of computing power, each and every user needs to verify the history of transactions and the supply of the cryptocurrency needs to be predetermined by its protocol. Trust can evaporate at any time because of the fragility of the decentralised consensus through which transactions are recorded. Not only does this call into question the finality of individual payments, it also means that a cryptocurrency can simply stop functioning, resulting in a complete loss of value. Moreover, even if trust can be maintained, cryptocurrency technology comes with poor efficiency and vast energy use. Cryptocurrencies cannot scale with transaction demand, are prone to congestion and greatly fluctuate in value. Overall, the decentralised technology of cryptocurrencies, however sophisticated, is a poor substitute for the solid institutional backing of  money. That said, the underlying technology could have promise in other applications, such as the simplification of administrative processes in the settlement of financial transactions. Still, this remains to be tested."

On the issue of energy use, as the "miners" who update the system while solving computational problems burn energy to do so: "Individual facilities operated by miners can host computing power equivalent to that of millions of personal computers. At the time of writing, the total electricity use of bitcoin mining equalled that of mid-sized economies such as Switzerland, and other cryptocurrencies also use ample electricity. Put in the simplest terms, the quest for decentralised trust has quickly become an environmental disaster." 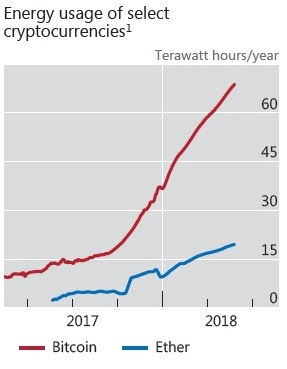 Verifying a cryptocurrency transaction through the blockchain is not only costly in terms of electricity, it's slow. This slowness isn't a bug; it's a feature--that is, it's built in to how the blockchain verifies transactions.  "[A]t the time of writing, the Bitcoin blockchain was growing at around 50 GB per year and stood at roughly 170 GB. Thus, to keep the ledger’s size and the time needed to verify all transactions (which increases with block size) manageable, cryptocurrencies have hard limits on the throughput of transactions." 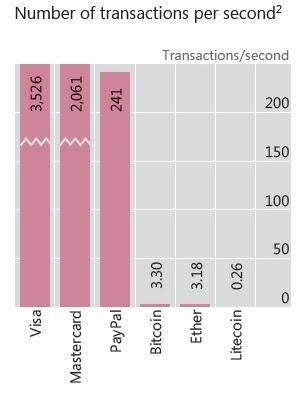 The underlying architecture of crytocurrencies is that they are updated in blocks, which can only be added an prespecified intervals of time after earlier blocks have been completed. When demand for transactions gets high, the system becomes congested and transactions sometime wait several hours before being verified. "Another aspect of the scalability issue is that updating the ledger is subject to congestion. For example, in blockchain-based cryptocurrencies, in order to limit the number of transactions added to the ledger at any given point in time, new blocks can only be added at pre-specified intervals. Once the number of incoming transactions is such that newly added blocks are already at the maximum size permitted by the protocol, the system congests and many transactions go into a queue. With capacity capped, fees soar whenever transaction demand reaches the
capacity limit . And transactions have at times remained in a queue for several hours, interrupting the payment process. This limits cryptocurrencies’ usefulness for day-to-day transactions such as paying for a coffee or a conference fee, not to mention for wholesale payments. Thus, the more people use a cryptocurrency, the more cumbersome payments become." 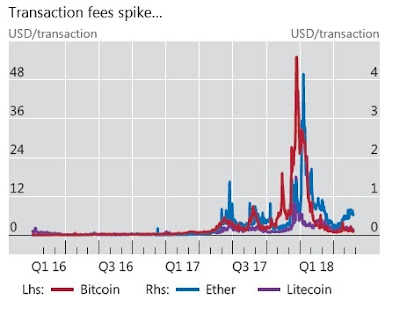 Put these issues of high and volatile transactions costs together with the extreme volatility in the price of cryptocurrencies, even those that are supposedly designed to have relatively stable values, and their widespread use as  "money" seems implausible.

But the underlying blockchain technology might prove itself useful in other ways, "in niche settings where the benefits of decentralised access exceed the higher operating cost of maintaining multiple copies of the ledger." These uses often will not involve cryptocurrencies, but will instead be "cryptopayment" systems where the blockchain technology is used by a group of players who have permission to be on the system to handle long-distance payments. For example, the World Food Programme’s ran a blockchain-based cryptopayment system to send funds for food aid serving Syrian refugees in Jordan. More broadly, a blockchain based system might cut transaction costs for the global remittance flows of $540 billion annually. Or a "smart contract" system might be set up to facilitate trade financing, such that exporters can be reassured that they will be paid and importers can be reassured that what they paid for has actually shipped.

My own sense is that blockchain is likely to be one more entry in the list of technologies that were invented for one purpose--in this case, cryptocurrency--but ended up instead being most useful for other purposes, from targeted finance to safe-recordkeeping to keeping track of supply chains. For more on Bitcoin and blockchain, see: