"The Seeds of the Declaration of Independence Are Yet Maturing"

John Quincy Adams, the sixth President of  the United States (and son of the second president John Adams and his wife Abigail) started a diary when he was 12 in 1779, and added to it continuously for almost 70 years. Some days the long entries were more than 5,000 words. There's one stretch of 25 years where he didn't miss a day. It sums up to more than 14,000 handwritten pages, and the magic of the Internet lets you see images of the 51 volumes here.

In thinking about the July 4 holiday, here's a comment from Adams's diary on December 27, 1819, about one of the basic questions confronting Americans of that time--and our own time. Thomas Jefferson both wrote the Declaration of Independence, and also was a slave-owner. As Adams writes: "With the Declaration of Independence on their lips, and the merciless scourge of slavery in their hands, a more flagrant image of human inconsistency can scarcely be conceived ..." Of course, modern Americans and their leaders can sometimes have the Declaration on their lips and injustice in their hands, too.

Facing that contradiction, Adams responded in a way that was both ominous and, at least in my reading, tinged with hope. He wrote: "The seeds of the Declaration of Independence are yet maturing," and that the result would be the "terrible sublime." Here's the passage, taken from John Quincy Adams, The Memoirs of John Quincy Adams (volume 4, pp. 492-493) available through the magic of the internet at the HathiTrust Digital library.


"[Thomas] Jefferson is one of the great men whom this country has produced, one of the men who has contributed largely to the formation of our national character — to much that is good and to not a little that is evil in our sentiments and manners. His Declaration of Independence is an abridged Alcoran of political doctrine, laying open the first foundations of civil society; but he does not appear to have been aware that it also laid open a precipice into which the slave-holding planters of his country sooner or later must fall. With the Declaration of Independence on their lips, and the merciless scourge of slavery in their hands, a more flagrant image of human inconsistency can scarcely be conceived than one of our Southern slave-holding republicans. Jefferson has been himself all his life a slave-holder, but he has published opinions so blasting to the very existence of slavery, that, how ever creditable they may be to his candor and humanity, they speak not much for his prudence or his forecast as a Virginian planter. The seeds of the Declaration of Independence are yet maturing. The harvest will be what West, the painter, calls the terrible sublime."

A couple of the references here might bear a bit more explanation. The reference to the "Alcoran," was a common contemporary spelling of what the AP Stylebook now spells as the "Quran." It's interesting to see a future US president in 1819 referring to the Quran as a parallel for the Declaration of Independence.

The final sentence refers to the painter Benjamin West, and presumably to paintings like his 1796 "Death on a Pale Horse." 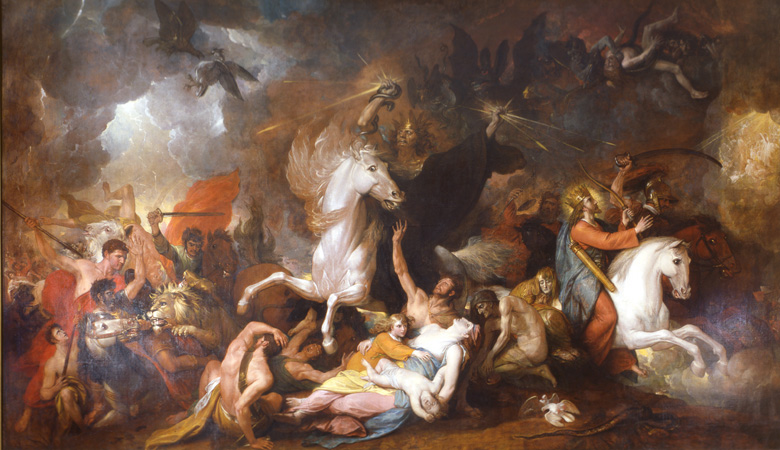 On July 4, I like to think that "the seeds of the Declaration of Independence are yet maturing," with a full recognition that this process will not always provide its positive results through a happy cheerful parade of good feeling, but instead will sometimes be confrontational, wrenching, and difficult.