Motor vehicle production and ownership is one window for looking at differences and changes in the world economy. Here are some snapshots from the Transportation Energy Data Book, produced by Oak Ridge National Laboratory for the US Department of Energy, updated August 2018. (For the record, the book includes many more figures about energy, motor vehicles, and other types of transportation, with a primarily US focus.) 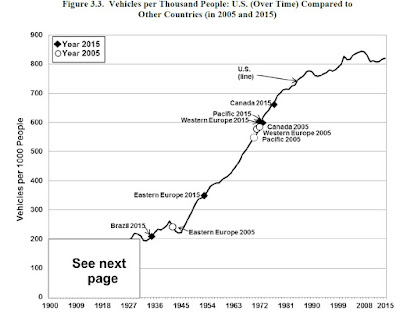 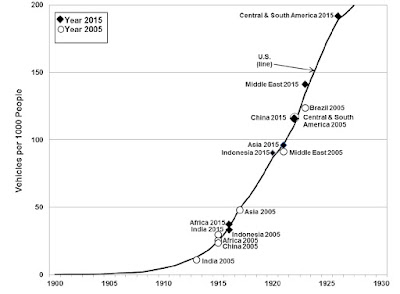 The likely conclusion here is that even if other countries around the world follow an extremely different path of economic development that involves many, many fewer cars--which is not a sure thing--the number of cars in the world is likely to rise dramatically in the next few decades.

Unsurprisingly, the large rise in car ownership in emerging markets around the world is already going hand in hand with large rises in car and truck production in those countries. Here's a figure showing the overall rise in car production n the world since 1983. 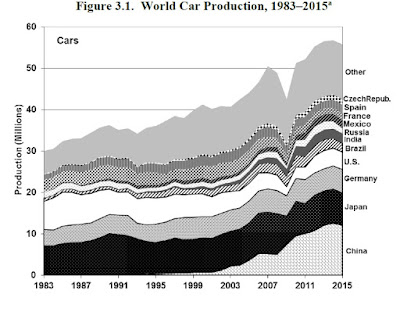 And a figure showing the overall rise in truck and bus production in the world. Just to be clear, light trucks, minivans, and sport-utility vehicles (SUVs) are classified as "trucks." 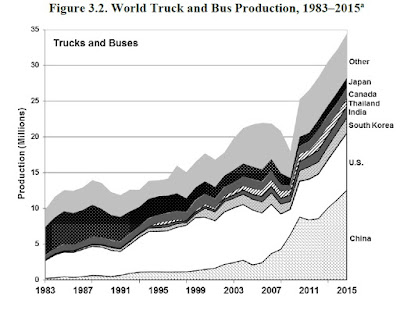 Here is a comparison car and truck production in different countries between 2000 and 2015. US car production has been dropping and the US now ranks fourth in total car production, well behind the top three of China, Japan, and Germany. However, the US remains strong in truck production--which again includes light trucks, minivans and SUVs. 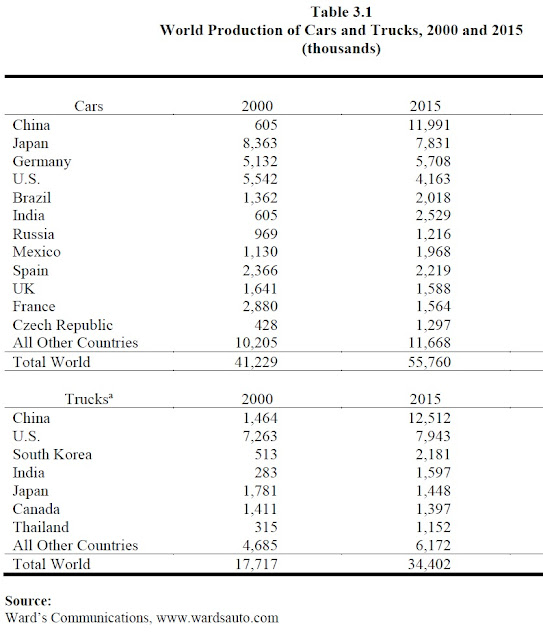 These patterns and trends seem to me interesting for a number of economic and environmental reasons, but let me focus here on some of the trade issues that are so much in the news.

The US produced about 7% of the world's cars in 2015, and about 22% of the world's trucks. This is not a dominant market position! I'm of course aware that many of those who are most eager for raising tariffs and other trade barriers claim that they are doing so based on their even deeper support for free and open international trade. (I'm dubious about their expressed motives, but time will tell.) There is a real danger that the tactics of higher trade barriers will lead to US firms being less able to participate in the global supply chains for automobile production. Given that the vast majority of future growth in motor vehicle production will be outside the US economy, this is a concerning possibility.
Posted by Timothy Taylor at 9:02 AM