Rumination: Why Not a Military War on Trade?

As President Donald Trump's trade war continues to escalate, it's perhaps worth remembering his tweet from back in March: 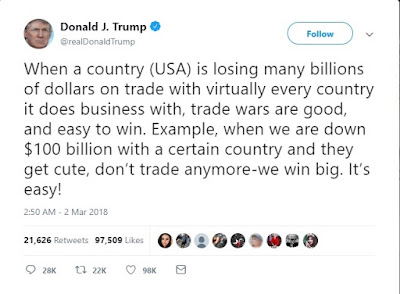 My focus here is on the notion that if we "don't trade anymore--we win big. It's easy!"

If this statement is true, then it seems to me that the Trump administration is wasting our time with wishy-washy economic diplomatic incentives to reduce imports from other countries, like tariffs and talks over trade rules. If no trade is a big win, then a serious trade policy sounds like this: Let the US announce that trucks or ships or planes carrying exports from other countries to the US will be destroyed by the US military if they approach US borders. We will extend multiple warnings and give those imports a chance to turn back. But if they do not, then carry through on the threat. After all, the goal is slashing imports. It's easy to win! We win big!

One might be concerned, I suppose about retaliation against US exports, or against multinational US companies that are involved in production in other countries. But there is apparently no risk of such retaliation. As Trump's trade adviser Peter Navarro stated back in March: "I don't believe that any country in the world is going to retaliate for the simple reason that we are most lucrative and biggest market in the world ..."

However, it stands to reason that if the US economy wins big from not receiving imported products from other countries, then presumably the economies of those other countries would win big from not receiving US exports, either. If imported products hurt the recipient nation, then a literal military war against trade seems certain to be beneficial for all--rather like many countries coordinating in a public health effort to wipe out a disease that crosses national borders.

I suppose the other response is to argue that President Trump and his advisers are only opposed to trade imbalances, and would support balanced trade.  But the argument that "no trade beats trade imbalances" doesn't much affect the case for a physical war against trade. After all, the United States could allow imports as long as US exports exceed imports, but then threaten to destroy all imports above that level. I've tried to explain why this view of trade imbalances is benighted (among other places, here and here), and won't go through it again here. But the lack of recognition of gains from trade is quite remarkable.

Moreover, when someone takes the positions that 1) no trade at all would be a big win; 2) pretty much all imports should be made in the US regardless of cost; and 3) international trade is a scoreboard where exports are points for the home team and imports are the points for the opposition; and 4) the US should ignore all existing trade agreements like the World Trade Organization in favor of bilateral tariffs--well, it requires greater mental plasticity than I can achieve to believe that their ultimate goal is to increase gains from trade by reducing barriers to movement of goods and services across international borders.

In the world of the web, perhaps it is necessary to close by adding that I do not favor a war on trade, either tariff-driven or military. I offer this rumination about a physical war on trade in the hope that it will make the anti-trade agenda look less attractive, rather than more so.
Posted by Timothy Taylor at 10:50 AM