The Doha round of the World Trade Organization talks started way back in 2001, and seems to have come to a standstill. Regional trade agreements became the preferred path for many nations, with 20-25 per year being negotiated most years from 2002-2016. Then the number drops off sharply in 2017, and falls almost to zero so far in 2018. 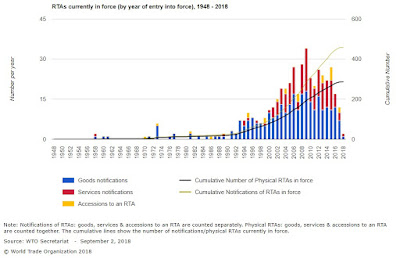 Back in the 1990s, there was a fear that regional trade agreements might lead to less overall freedom of international trade, by instead creating many trade blocs and rules that could hinder trade. That fear turned out to be wrong. As Richard Baldwin wrote a few years ago in the Winter 2016 issue of the Journal of Economic Perspectives:

"Despite its manifest success, the WTO is widely regarded as suffering from a deep malaise. The main reason is that the latest WTO negotiation, the Doha Round, has staggered between failures, flops, and false dawns since it was launched in 2001. But the Doha logjam has not inhibited tariff liberalization—far from it. During the last 15 years, most WTO members have massively lowered barriers to trade, investment, and services bilaterally, regionally, and unilaterally—indeed, everywhere except through the WTO. The massive tariff cutting that has taken place around the world, shown in Table 1, has been at least as great as in the previous successful WTO rounds. Moreover, the Doha gridlock has also not dampened nations’ interest in the WTO; 20 nations, including China and Russia, have joined since 2001."

At that time, Baldwin was making the argument that the many regional trade agreements, along with literally thousands of bilateral investment agreements, were a deeper form of trade negotiation: that is, when negotiating over issues like international trade in financial services, or protection of intellectual property, or certain kinds of health and safety regulation.

He further pointed out that many of these regional trade agreements (along with several thousand international investment treaties) often included many similar rules. Thus, it could be possible to combine regional agreements into "mega-regional" agreements like the proposed Trans-Pacific Partnership and the Transatlantic Trade and Investment Partnership.  But those agreements have now fallen by the wayside.

We left the time period in which the World Trade Organization dominated world trade talks about 20-25 years ago. We seem to now be leaving the time in which regional or bilateral agreements about international trade and investment were a major tool for reducing trade barriers. What comes next is still unfolding.
Posted by Timothy Taylor at 9:00 AM