Finding ways for people to be healthier and better-educated is both a useful goal in itself, and also an investment that increases future economic production. When I find myself worrying, as one does, that the world is falling to pieces, it's useful to remember basic facts:

This is from the start of Chapter 3 of the 2019 World Development Report from the World Bank, which focuses on the theme "The Changing Nature of Work."  The report contains chapters about technology, jobs, firms, and issues of social protection in an evolving economy. But I found myself drawn to the discussion of what economists call "human capital"--the investments in people that lead to future economic output. This version of the WDR introduces a "Human Capital Index," described in this way (footnotes and references to figures are omitted):


"The new index measures the amount of human capital that a child born in 2018 can expect to attain by age 18 in view of the risks of poor education and poor health that prevail in the country in which she was born. ... It has three components: (1) a measure of whether children survive from birth to school age (age 5); (2) a measure of expected years of quality-adjusted school, which combines information on the quantity and quality of education; and (3) two broad measures of health—stunting rates and adult survival rates." 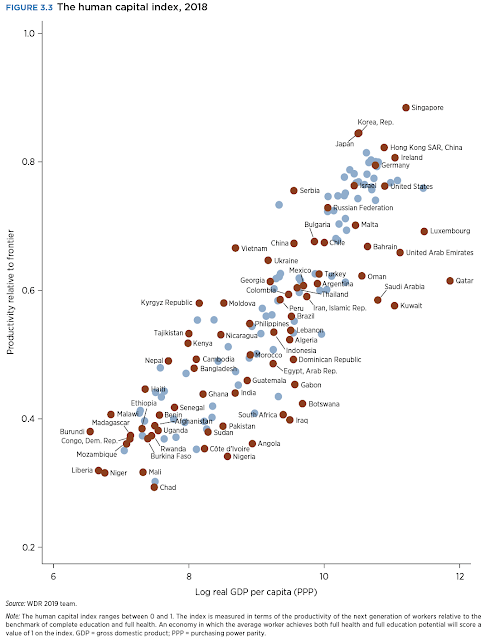 It's perhaps useful to say a bit more about the components of this index. The first component, the share of children who survive to the age of 5, is fairly self-explanatory.

The second component, based on education, has at least two issues worth noting. One issue is that, as emphasized in the 2018 World Development Report, many countries have succeeded in getting children to attend school but not necessarily in teaching them very much. Thus, the World Bank researchers wanted a measure of how much education was actually being achieved, not just how many butts were in the classroom seats. The report notes:

"The World Bank Group and its partners are developing a comprehensive new database of international student achievement test scores covering  around 160 economies to benchmark what children learn. The database harmonizes results from international and regional testing programs so they are comparable. For the first time, learning is measurable in nearly all countries using the same yardstick. The differences in learning are dramatic. Country-level average test scores range from around 600 in the best-performing countries to around 300 in the worst-performing. To put these numbers in perspective, a score of roughly 400 corresponds to a benchmark of minimum proficiency set by the Programme for International Student Assessment (PISA), the largest international testing program. Less than half of students in developing countries meet this standard, compared with 86 percent in advanced economies. In Singapore, 98 percent of students reach the international benchmark for basic proficiency in secondary school; in South Africa, only 26 percent of students meet that standard. Essentially, then, all of Singapore’s secondary school students are prepared for a postsecondary education and the world of work, while almost three-quarters of South Africa’s young people are not."

A second point is that the index focuses on education level by age 18. Thus, a perfect score on this index would be someone who starts preschool at age 4 and attains 14 years of education by age 18.  As the report notes: "High enrollment rates throughout the school system bring many rich countries close to the 14-year benchmark. But in the poorest countries, children can expect to complete only half of that." This cutoff at age 18 of course means that higher education is not included in the figure. To put it another way, countries where a higher share of students attend school after age 18 get no boost in this figure, which tends to make the education gap between higher income countries and the rest look smaller.

On the two proxies for health in the third component of the index, "adult survival rates" is fairly self-explanatory. As to the other measure, "Stunting measures the share of children who are unusually small for their age. It is broadly accepted as a proxy for the prenatal, infant, and early childhood health environment, and it summarizes the risks to good health that children are likely to experience in their early years—with important consequences for health and well-being in adulthood." 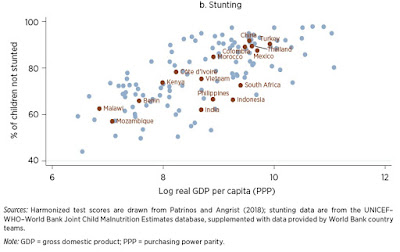 There are worthwhile arguments to be had over how best to measure the education and health aspects of human capital, and even rthwhile arguments to be had over how to improve human capital in a given country. But at a deeper level, it's worth remembering that improved health and education represent greater social and economic empowerment and greater well-being--and that that there are considerable gains to be made in many countries, including the US, on both dimensions.
Posted by Timothy Taylor at 11:57 AM