Twice a year the Congressional Budget Office publishes a "just the facts" overview of the federal budget picture and the US economy. The latest version is "The Budget andEconomic Outlook:2019 to 2029 (January 2019). Here, I'll focus on the US budget deficit and debt. 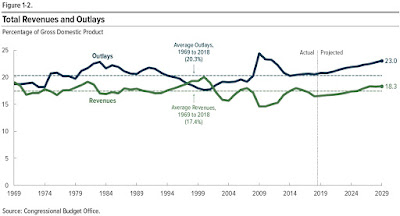 But under the surface, two changes are going on--one medium-term and one longer-term. The medium-term change is that the usual pattern over time has been that when the US economy is proceeding strongly, with sustained growth and a relatively low unemployment rate, the budget deficits are usually lower, or in the late 1990s even turned into surpluses. But at present, the trajectory is a relatively healthy economy but with larger-than-usual budget deficits. 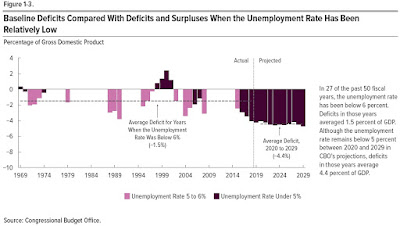 The longer-term issue involves the rising share of government spending that is going to support benefits for the elderly. Here's an illustrative figure from the CBO on the share of federal (non-interest) spending going to the elderly. Specifically, federal spending on the elderly was 35% of total in 2005, 40% of the total by 2018, and headed for 50% of the total 2029. 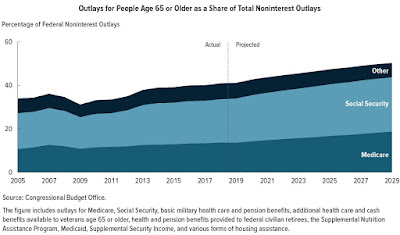 The tradeoffs here are a matter of basic arithmetic. If federal spending on the elderly keeps rising, but but there is a goal of keeping total federal spending at about the same level, then other federal spending needs to be slashed. Indeed, overall federal investment has been dropping over time: less for support of R&D, less for infrastructure, less for support of training and employment.  It used to be a half-century ago, that the federal government spent more on investment than on the broad category of paying benefits, but the nature of the federal government has shifted substantially, and over time it has become primarily about paying benefits. As the figure shows, we are rapidly headed toward a situation in which half of all (non-interest) federal spending involves payments of benefits just to the elderly--not even counting benefits paid to those under age 65.

The figure above, showing overall patterns of spending and revenue, show the outcome. Spending keeps rising, driven in the medium-run by the rise in spending on the elderly. Despite the sustained economic growth and low unemployment rate, federal taxes dipped in the last year and will stay relatively low for a situation where the economy is doing fairly well, in substantial part because of the Tax Cuts and Jobs Act passed in December 2017. As this combination of spending and taxes leads to higher budget deficits, more government debt accumulates, and interest payments start climbing, too. For example, the CBO projections show that "net interest" is 1.6% of GDP in 2018, but rises to 2.6% of GDP by 2023.

Don't skip over that rise in interest payments too quickly. The US GDP is about $20 trillion in 2018. So 1% of GDP amounts to $200 billion which is being spent as a price paid for past borrowing--and thus won't be available for spending increases or tax cuts.

Combine these factors, and the US ratio of debt/GDP is headed out of its historical range. There have been spikes in the debt/GDP ratio before, notably in times of war, or during the large budget deficits during the Reagan presidency in the 1980s. But according to the CBO, using current law as its baseline, we are headed well outside those limits in the next couple of decades. 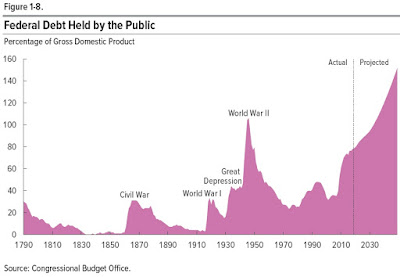 Presumably the answers involve restraints on spending programs for those over-65 or raising additional tax revenue. Those steps need to be phased in energetically even if the only goal is to get off the pathway of an extreme debt/GDP rise. In addition, if you would like to see the pendulum swing back at least a bit--so that the federal government can again take up its role of investing in R&D, infrastructure, and workers--then even greater changes are needed.

This pattern of a rising debt/GDP ratio raises a number of economic concerns. As the CBO report summarizes:


Such high and rising debt would have significant negative consequences, both for the economy and for the federal budget, including these:

As I have said before, I am not someone who argues for sharp immediate reductions in budget deficits. But the long-term trajectory is troubling. And the undebated and de facto shift of the federal government to an institution where the main budgetary action is sending out payments, rather than making investments in the country's future, troubles me as well.