What if Most Americans Don't Care That Deeply about Trade?

"In fact, recent public opinion polling uniformly reveals that, first, foreign trade and globalization are generally popular, and in fact more popular today than at any point in recent history; second, a substantial portion of the American electorate has no strong views on U.S. trade policy or trade agreements; third, and likely due to the previous point, polls on trade fluctuate based on partisanship or the state of the U.S. economy; and, fourth, Americans’ views on specific trade policies often shift depending on question wording, especially when the actual costs of protectionism are mentioned. These polling realities puncture the current conventional wisdom on trade and public opinion—in particular, that Americans have turned en masse against trade and globalization ..."

Thus argues Scott Lincicome in "`The “Protectionist Moment' That Wasn’t: American Views on Trade and Globalization," written as an installment of the Free Trade Bulletin from the Cato Institute (November 2, 2018).

If you disagree with the statements above, your disagreement isn't with Lincicome (or with me), it's with the array of polling data that Lincicome presents. For example, on the issue of how Americans feel about trade:
But perhaps the deeper lesson of the polling data seems to be that American opinions about free trade do not seem especially strong or robust. For example, my own guess is that some of the rise in support for trade is a reaction against President Trump's anti-trade rhetoric and policies--but that some of the same people who express support for trade now could switch sides if tariffs were imposed on imports by a politician or party that they supported.

This figure shows the range of opinions from "very strong opposition" to "very strong support" on a range of issues. The black line shows that a much larger share of the opinions about trade are in the "neither favor or oppose" category than is true for the other issues. 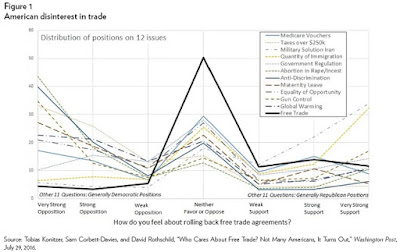 Also, while it's always true that the phrasing of questions in a survey will affect the results, this affect seems especially strong on trade issues. Here are a couple of examples from Bloomberg surveys. If you ask a trade question like this, you get a strongly protectionist answer:

“Generally speaking, do you think U.S. trade policy should have more restrictions on imported foreign goods to protect American jobs, or have fewer restrictions to enable American consumers to have the most choices and the lowest prices?”

But if you ask a trade question like this, you get a strongly free trade answer:


“Are you willing to pay a little more for merchandise that is made in the U.S., or do you prefer the lowest possible price?”

This difference also seems to reflect actual consumer/voter behavior. American may cheer for politicians who promise "to protect American jobs," but they aren't very eager to pay actual higher prices to make this occur. Lincicome summarizes the evidence this way:


"[P]rotectionist policies emanating from the United States government today are most likely a response not to a groundswell of popular support for protectionism but instead to discrete interest group lobbying (e.g., the U.S. steel industry) or influential segments of the U.S. voting population (e.g., steelworkers in Pennsylvania). Protectionism therefore remains a classic public-choice example of how concentrated benefits and diffuse costs can push self-interested politicians into adopting polices that are actually opposed by most of the electorate."

It's interesting that President Trump has a number of times defended his protectionist policies as a necessary negotiating step to greater free trade. From a trade policy perspective, this justification is the tribute that vice pays to virtue.
Posted by Timothy Taylor at 9:00 AM