Treasury Secretary Steve Mnuchin has "determined that China is a Currency Manipulator" (with capital letters in the press release) The overall claim is that one major reason for China large trade surpluses is that China is keeping is exchange rate too low. This low exchange rate makes China's exports cheaper to the rest of the world, while also making foreign products more expensive in China, thus creating China's trade surplus.

The claim is not particularly plausible.  Indeed, a cynic might point out that if currency manipulation was the main trade problem all along then, then Trump has been wasting time by playing around with tariffs since early 2018. For perspective on the exchange rate issue, let's start with the Chinese yuan/US dollar exchange rate in the last 30 years. 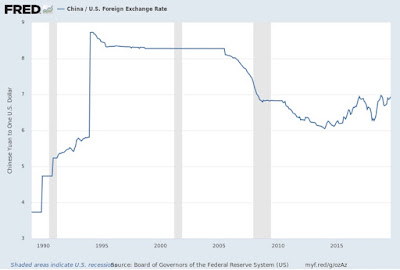 It's useful to compare the yuan exchange rate with China's balance of trade. Here's a figure based on World Bank data showing China's trade balance since 1990.  Back in the 1990s, China's trade surplus was usually positive, but also typically less than 2% of GDP. When China joins the WTO in 2001, its exports take off and so does its trade surplus, hitting 10% of GDP in 2007. It would be highly implausible to attribute this jump in China's trade surplus to currency manipulation, because the first figure shows that China's exchange rate is unchanged during this period. It is also highly implausible to attribute this rise to more Chinese protectionism, because China's giant trade surpluses resulted from higher exports, not lower imports. 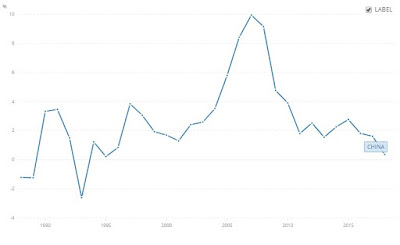 So how did the US Treasury decide in August 2019 that China was now manipulating its currency? Treasury is required by law to publish a semiannual report, "Macroeconomic and Foreign Exchange Policies of Major Trading Partners of the United States."

At the time of the October 2018 report, exchange rate was about 6.9 yuan/dollar. The report did not find that China was acting like a currency manipulator at that time. As it points out, the IMF agreed with this view, as did other outside economists. For example, the Treasury wrote:


"Over the last decade, the RMB has generally appreciated on a real, trade-weighted basis. This appreciation has led the IMF to shift its assessment of the RMB in recent years and conclude that the RMB is broadly in line with economic fundamentals."

That report also offers a macroeconomically odd complaint. It acknowledges that China's overall trade surplus in 2018 was near-zero, but then complains that China's trade position is "unevenly spread"--that is, China has a trade surplus with some countries like the US, but a nearly offsetting trade deficit with other countries. Treasury wrote:

So China was on warning that even if its overall trade balance was near-zero, the US was only focused on the bilateral trade balance. The next Treasury report arrives in May 2019, when the exchange rate was still 6.9 yuan/dollar, as it had been at the time of the October 2019 report. Again, Treasury does not find that China is a currency manipulator. However, in the exchange rate graph above you can see a little dip in the yuan/dollar exchange rate in March 2018, as the yuan becomes a bit weaker for a short time. Treasury warns:


Notwithstanding that China does not trigger all three criteria under the 2015 legislation, Treasury will continue its enhanced bilateral engagement with China regarding exchange rate issues, given that the RMB has fallen against the dollar by 8 percent over the last year in the context of an extremely large and widening bilateral trade surplus. Treasury continues to urge China to take the necessary steps to avoid a persistently weak currency.

The May 2019 report sets out three standards that Treasury will supposedly be looking at when thinking about currency manipulation. First is whether the country has a bilateral trade surplus with the US of more than $20 billion, which China does. Second is whether the country has an overall trade surplus of more than 2% of GDP, which China doesn't.  IMF statistics find that China's trade surplus in 2018 was 0,4% of GDP; moreover, the IMF finds that China is headed for a trade deficit in the next few years. Third is whether the country is intervening regularly in foreign exchange markets. As the Treasury report points out, Bank of China foreign exchange operations are shrouded in secrecy, but the evidence suggests that China's foreign exchange reserves haven't moved much since early 2018, or are perhaps a bit down overall, which is not consistent with the theory that the Bank of China has been buying lots of US dollars to keep the yuan exchange rate weak.

For those with eyes to see, it should be apparent that trade deficits and surpluses rise and fall as a a result of large-scale macroeconomic factors, including national levels of consumption, savings, and investment.  I won't belabor this point here, because I've tried to explain it a few times: for example, see "Misconceptions about Trade Deficits" (March 30, 2018), "Some Facts about Current Global Account Balances" (August 7, 2018), and "US Not the Source of China's Growth; China Not the Source of America's Problems" (December 4, 2018).

Understanding the actual drivers of trade balances explains why raising tariffs for a year and watching the US trade deficit got larger, rather than smaller. China's yuan/dollar exchange rate is at a level where its overall trade balance is near-zero, and according to the IMF, headed for a modest trade deficit in the next few years. Thus, the IMF is unlikely to back the Trump administration argument that the Bank of China is manipulating its exchange rate. But if the Trump administration bludgeons China into having a substantially stronger exchange rate, what happens next?

A strong exchange rate for one currency necessarily means a weaker exchange rate for other currencies: for example, if it takes fewer yuan to buy a dollar, it necessarily takes more dollars to buy a yuan. By arguing for a stronger yuan exchange rate, the Trump administration is apparently trying to devalue its way to prosperity by arguing for a weaker US dollar exchange rate,  This makes it easier to sell US exports abroad, but the lower buying power for the US dollar also means that, in effect, everything which is imported by consumers and firms will cost more.  Economies with floating exchange rates, like the US, are built to absorb short- and even medium-term fluctuations in exchange rates without too much stress. But in effect, the current Treasury policy is to advocate that China take steps to produce a permanently weaker US dollar--and thus benefit exporters at the cost of higher prices for importers--until the bilateral US trade deficit with China is eliminated.
Posted by Timothy Taylor at 9:16 AM