There's a long-standing controversy over whether those who donate a kidney should be able to be paid for doing so. Whatever one's view of whether the seller of a kidney should get a positive price for doing so, it's worth considering that under traditional rules, the donor of a kidney in efect receives a negative price for doing so. That is, the donor of a kidney faces a variety of costs--both explicit (travel, hotel) and implicit (time off from work, physical discomfort). Even many those who feel that a kidney donors should not be paid for the act of donating itself seem willing to consider the possibility that donors should be reimbursed for expenses.

The Trump administration just signed an executive order which would expand the ability of the National Living Donor Assistance Center to compensate kidney donors for expenses: not just reimbursing them for travel expenses, but also for lost wages, child care, and other expenses.

How much difference would such a policy of expanding compensation for expenses make? Somewhat coincidentally, Frank McCormick, Philip J. Held, Glenn M. Chertow, Thomas G. Peters and John P. Roberts were just in the process of publishing "Removing Disincentives to Kidney Donation: A Quantitative Analysis," which appeared in the Journal of the American Society of Nephrology (July 2019, pp. 1349-1357). Here's their list of seven disincentives to donate a kidney, with an estimated monetary cost for each: 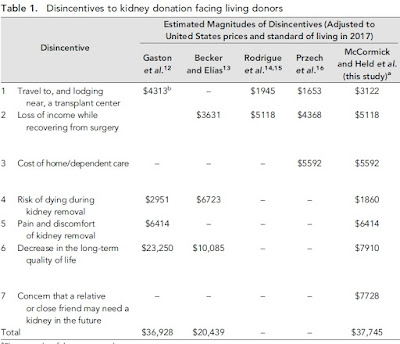 They readily admit that there is a high range of uncertainty around these kinds of estimates. Given that caveat, they argue:


We show that the total monetary value of the seven disincentives facing a typical living kidney donor is about $38,000. Removing all disincentives would increase kidney donations by roughly 12,500 per year, which would cut the adult waiting list for transplant kidneys in half in about 4 years. This would require an initial government  outlay of only about $0.5 billion per year, but would ultimately result in net taxpayer savings of about $1.3 billion per year. The value to society of the government removing the disincentives would be about $14 billion per year, reflecting the great value of the additional donated kidneys to recipients and the savings from these recipients no longer needing expensive dialysis therapy.

To put it in bluntest possible terms, about  40,000 people die each year for lack of a kidney transplant. So explicit consideration of disincentives to donate and  how to address them could save thousands of lives.

But it's also true that while the new Trump administration policy would expand incentives for kidney donations by covering lost income and dependent care, it wouldn't include all the items on the list above, like compensation for the pain and discomfort of having a kidney removed.

This line between "compensation for expenses" and actual payment for donating a kidney seems murky to me. Is a kidney donor is allowed to travel to the operation in first-class or to stay in a fancy hotel, or to be compensated for eating at some nice restaurants? Or does "compensation" for expenses mean that only the least expensive transportation,  hotels, and meals are allowed? What quality and cost is going to be allowed in terms of potential compensation for dependent care?

Once you have accepted that the price of donating a kidney should not be negative, because prices for donating kidneys have incentive effects, then you don't want to turn around and demand that the expenses of kidney donors are treated as cheaply as conceivably possible. But what if some kidney donors overall can get compensation for "medium-priced" or "high-priced" expenses, but some donors would rather receive lower-priced compensation and also get some cash that they could use for, say, paying rent for a couple of months or buying a used car? Telling potential kidney donors that they can get generous compensation for any money they spend out-of-pocket, but zero compensation for pain or health risks from donating, applies a constricted notion of "costs" and incentives.

And ultimately, while we are picking through what is an acceptable expense for kidney donors, it's worth a mention that none of the other parties in the health care system--doctors, nurses, anesthesiologists, those in the test laboratories, hospitals, and so on--are being told they need to make any free contributions to the kidney transplant process.

For previous posts with relevance to the intersection of economics, incentives, and kidney transplant issues, see: