How does the homelessness situation vary across states? Brent D. Mast offers some basic facts in "Measuring Homelessness and Resources to Combat Homelessness with PIT and HIC Data" (Cityscape, vol 22, no. 1, published by US Department of Housing and Urban Development, pp. 215-225).

The article offers useful quick overview and critique of the PIT and HIC data. The Point-in-Time (PIT) data is a national survey about the number of homeless conducted each year during the last 10 days in January. It is widely believed to understate the total number of homeless--a group it is of course difficult to count--but if the degree of understatement is similar from year to year, it can still offer a useful measure. The Housing Inventory Count (HIC) data is an "annual inventory of the beds, units, and programs" to serve the homeless.

I unabashedly admit that part of what caught my eye in Mast's article were his innovative figures for displaying this data. For example, the first column of figures here shows the temperature in January (when the PIT survey is done) for each state. The states are in groups of four. There's a tiny map of the US just to left, and the color of the four states illustrated on the first tiny map match the four colors of the point. Thus, the red dot in the top cluster of four states is Alaska, the red dot in the next cluster of four states is Wisconsin, and so on. 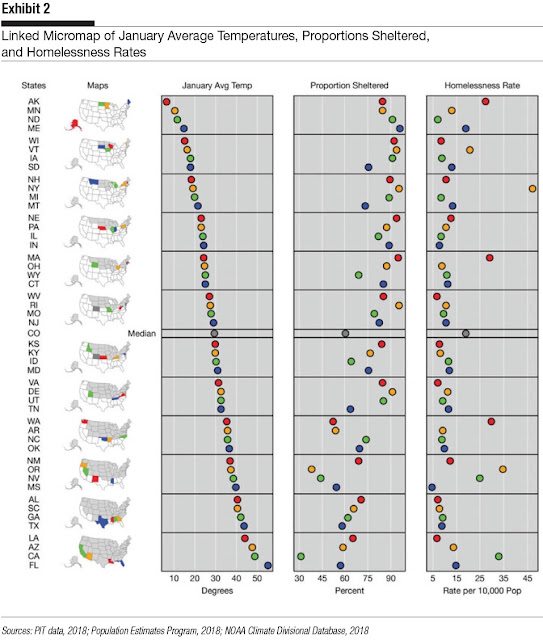 The middle column shows what share of the homeless are in some kind of shelter. Here, the western coast states of California, Oregon, and Nevada stand out for relatively low rates. Other states with colder Januaries but high rates of homelessness, like New York, Massachusetts, and Alaska, have a much higher share of the homeless in shelters. As Mast points out: "This inverse relationship could reflect less necessity for providers to shelter homeless populations in warmer winter climates, or a decreased preference of homeless people to seek winter shelter in warmer states."

The next figure shows the ratio of beds to the total homeless population. Again, the first column ranks the states by average January temperature. Don't be too concerned that the "bed ratio" exceeds 100% for some states. Remember that this method of counting the homeless--done once a year-- probably understates the total, and so some states are presumably planning for the actual number of homeless who show up on the worst nights. 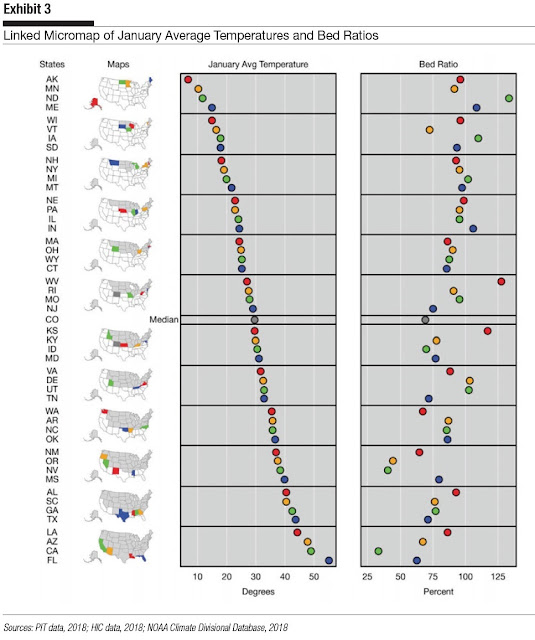 In general, states with colder Januaries do tend to have a higher ratio of beds-per-homeless. However, this figure shows that the three states with very low shelter rates for the homeless--California, Oregon, and Nevada--are also the three states with very low rates of beds-for-the-homeless relative to the number of homeless. This pattern tends to suggest that the lack of beds may help to explain the low proportion of homeless people in shelter in these states. As Mast gently puts it: "The positive relationship between the proportion sheltered and the bed ratio reflects the fact that one might expect a greater proportion of homeless persons to be sheltered when more beds are available relative to the homeless population."
Posted by Timothy Taylor at 4:11 PM