Like many readers of this blog, I suppose, I'm spending chunks of time reading about aspects of the coronavirus pandemic. I post here about some of what I run across. Examples include:
However, many of the readings I find don't seem like useful fodder for the kinds of posts I try to do. Here are five examples that I tweeted about in the last few days:

1) Although it's not a great comfort just now, it's perhaps worth remembering that dealing with pandemics has been a common human experience through the millennia. For an interview that moves back and forth from historical examples to our current experience, I recommend: "“Pandemic! What Do and Don’t We Know? Robert P. George in Conversation with Nicholas A. Christakis” (this edited version of the interview was published April 7, the original one-hour interview from March 30 is available here). For example, Christakis notes:

It is a very standard thing to implement social distancing. Thucydides describes it in the plague that afflicted Athens in 430 BC. It’s not rocket science. There are two kinds of ways that we can respond to pandemics. One is so-called pharmaceutical interventions, drugs and vaccines, for which we don’t have any for this condition, although we hope to have some in the future. The other is so- called non-pharmaceutical interventions, of which there are two types: individual stuff—like washing your hands, self-isolating, not touching your nose and face—and collective interventions—like school closures or the governor banning public gatherings. All of these have been around forever. You can look at medieval woodcuts of how the people in European cities coped with pandemics and see them spaced out in the public squares. This is a fundamental human experience that we’re having. It’s been described for long periods of time. It’s just we’re not used to having it. 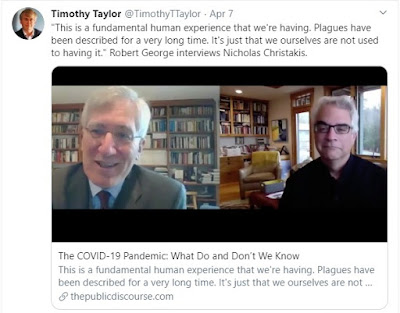 2) A pandemic forces society to strike a balance between public health and economic factors. It seems to me that some period of sheltering-in-place is a reasonable way to strike that balance, but for how long and under what rules are topics on which reasonable opinions can differ. Sergio Correia, Stephan Luck, and Emil Verner provide a readable overview of their just-published working paper in "Fight the Pandemic, Save the Economy: Lessons from the 1918 Flu" (Liberty Street Economics website, Federal Reserve Bank of New York, March 27, 2020). They look at geographical patterns of the 1918 flu, along with geographical patterns of steps like "closures of schools, theaters, and churches, bans on public gatherings and funerals, quarantines of suspected cases, and restrictions on business hours." Unsurprisingly, they find that steps which shut down public spaces and business were associated with drops in economic activity. But perhaps surprisingly, they also found "that cities that intervened earlier and more aggressively experienced a relative increase in real economic activity after the pandemic subsided."

3) For a number of people, one "lesson" they seem to be taking away from the pandemic is that a competitive market economy doesn't do a good job in addressing events like a pandemic, and greater government intervention is needed. The first claim (about shortcomings of markets) is fair enough, but the second claim (about the merits of greater government intervention) is in this case an unproven article of faith. Here's an article from the New York Times on how the US government started planning 13 years ago to build up a stockpile of ventilators. As of late 2019, the government had succeeded in approving which ventilator the contractor would deliver--but none had actually been delivered yet. 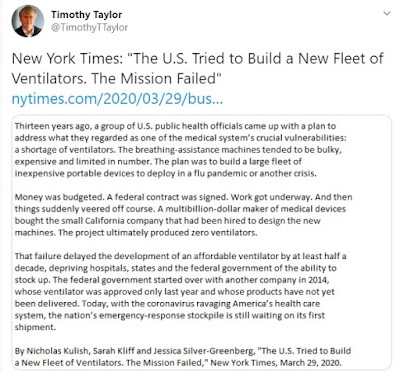 4) Will experimental patterns tried out during the shelter-in-place period become longer-term habits? For example, will online education see a lasting surge? (After all, if it's good enough to get academic credit for degrees at Harvard, Stanford, and everywhere else, why not make it as standard practice?)
Katherine Guyot and Isabel V. Sawhill make the prediction that "Telecommuting will likely continue long after the pandemic" (Brookings Institution, April 6, 2020).  They make a strong case, but I confess that I'm skeptical. My sense is that telecommuting is a two-edged sword: workers like having the option when it's convenient for them, but they dislike the feeling that their work-life is bleeding into the rest of their life and that they are perpetually on call for their employers. 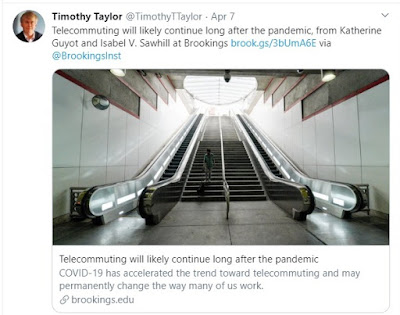 5) Yes, many people went on an odd toilet-paper buying spree. But in talking about this market, there's more to the story. Toilet paper is really two markets--home and commercial--and substitution between them isn't easy. With people sheltering at home, they objectively were planning to use more toilet paper than if they were spending hours each day at office or school. The quantity demanded for home toilet paper is usually quite predictable and steady, and the supply chain was thus quite unprepared for a rise in demand. Will Oremus tells the story in "What Everyone’s Getting Wrong About the Toilet Paper Shortage" (Marker Medium, April 2, 2020). 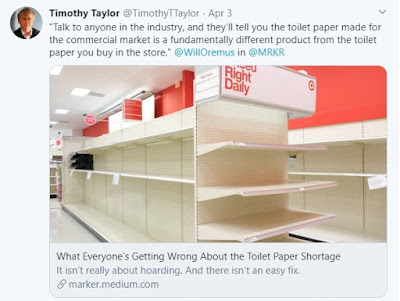 Posted by Timothy Taylor at 4:25 PM