Is It Getting Harder for Research to Boost Productivity?

New technologies are the beating heart of productivity growth and a rising standard of living. But Nicholas Bloom, Charles I. Jones, John Van Reenen, and Michael Webb ask "Are Are Ideas Getting Harder to Find?" (American Economic Review, April 2020, pp. 1104-44, not freely available online). The fact that the are asking you the question tells you that their answer is a pessimistic one. This economics research article will be tough sledding for the uninitiated, but the heart of their case is made with some graphs suitable for anyone to mull over. 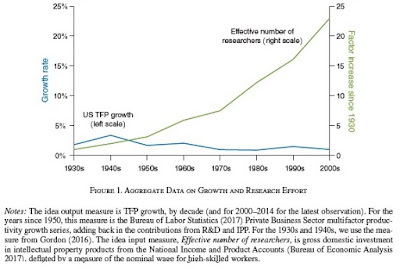 For a specific example, consider Moore's law, the notion that the density of semiconductors on a computer chip will double every two years or so. Moore's law turned 50 a few years ago, and as I noted at the time, it's been getting more and more expensive and difficult to keep doubling the density of chips. As Bloom, Jones, van Reenen and Webb write: "In particular, the number of researchers required to double chip density today is more than 18 times larger than the number required in the early 1970s. At least as far as semiconductors are concerned, ideas are getting harder to find. Research productivity in this case is declining sharply, at a rate of 7 percent per year." 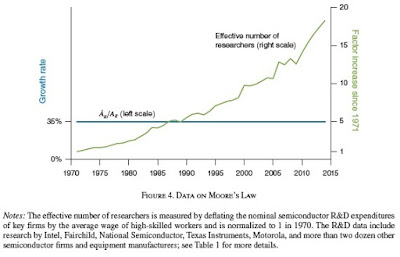 Or how about agricultural crop yields? The green lines show the number of researchers, rising; the blue line shows agricultural productivity growth, falling. 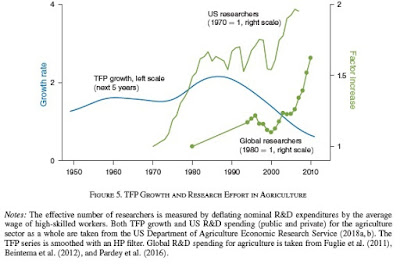 Or how about inventions of new drugs? The authors write:

New molecular entities (NMEs) are novel compounds that form the basis of new drugs. Historically, the number of NMEs approved by the Food and Drug Administration each year shows little or no trend, while the number of dollars spent on pharmaceutical research has grown dramatically ... We reexamine this fact ... The result is that research effort rises by a factor of 9, while research productivity falls by a factor of 11 by 2007 before rising in recent years so that the overall decline by 2014 is a factor of 5.

Or how about reductions in cancer? Yes, death rates for cancer are falling, but research into fighting cancer has been rising quite rapidly. As a result, it seems to be taking more and more research publications about cancer and more and more clinical trials to reduce cancer deaths by an equivalent amount. 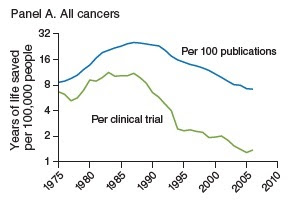 Based on these and other examples, the authors write: "[J]ust to sustain constant growth in GDP per person, the United States must double the amount of research effort every 13 years to offset the increased difficulty of finding new ideas."

In the fashion of honest academics, the authors note in a number of places and in a number of ways that examples like these don't prove conclusively that it's becoming more costly to find ideas and harder for research to boost productivity. For example:


You can probably add some possibilities to this list. But the weight of the argument from Bloom, Jones, van Reenen and Webb is that if we want technology and new ideas to ride to our rescue in a variety of areas--productivity growth, reducing pollution, improving health care and education, and many others--we need to step up our efforts considerably.
Posted by Timothy Taylor at 2:56 PM