Extraordinary Spending in the 2020 Campaign

When you want information about campaign spending, the place to turn is the Open Secrets website run by the Center for Responsive Politics. It will take a few weeks longer to get a final tally on campaign spending for the 2020 elections, but some patterns are already pretty clear, as they point out in "2020 election to cost $14 billion, blowing away spending records" (October 28, 2020). They write:

The 2020 election is more than twice as expensive as the runner up, the 2016 election. In fact, this year’s election will see more spending than the previous two presidential election cycles combined.

The massive numbers are headlined by unprecedented spending in the presidential contest, which is expected to see $6.6 billion in total spending alone. That’s up from around $2.4 billion in the 2016 race.

Democratic presidential nominee Joe Biden will be the first candidate in history to raise $1 billion from donors. His campaign brought in a record-breaking $938 million through Oct. 14, riding Democrats’ enthusiasm to defeat Trump. President Donald Trump raised $596 million, which would be a strong fundraising effort if not for Biden’s immense haul. ...

Spending by deep-pocketed national groups also is driving the total cost of election higher. In the month of October alone, outside spending by super PACs and other big-money groups totaled nearly $1.2 billion. These groups are spending far more to boost Biden than help Trump, further aiding the Democrats cash-flush campaign. ...

The article and website are full of interesting illustrative figures. For example, here's total spending for the last few presidential years, divided into spending on the presidential and congressional campaigns. 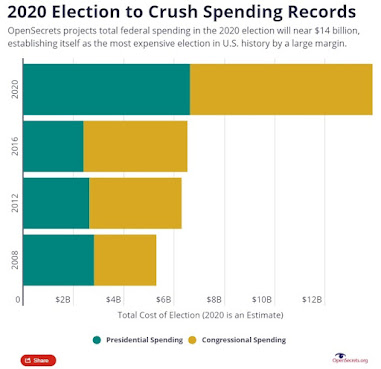 Here's campaign spending broken down by the sources of funds. 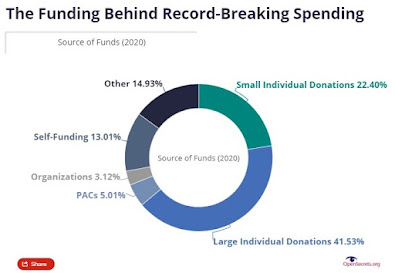 And here's campaign spending from different industries, divided into Ds and Rs. 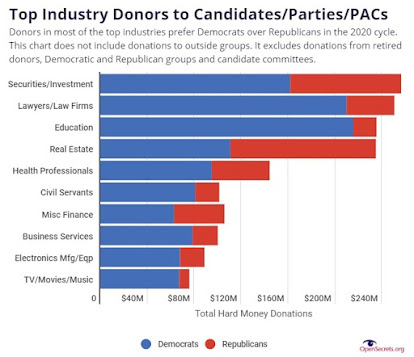 Finally, there's an irony worth noting here. It's more common for Democrats than for Republicans to express concern over high levels of campaign spending, and to suggest ways of limiting it. But if Joe Biden ends up prevailing when all the election counts are said and done, as seems likely, the enormous edge in campaign spending for Biden and Democratic candidates overall may well have made the difference in the key states Biden needed to win.

Posted by Timothy Taylor at 1:09 PM