One of the many highlights of my fatherhood experience was when one of my children was assigned a paper on the Hoover Dam. This meant that for a couple of weeks I could ask during family dinnertime conversations: "How is the dam paper going? Is the dam first draft ready yet? What are you learning from your dam school project?" Years later, my children still wince about the experience. Well, the dam topic is back again.

Researchers at Resources for the Future have been looking at the issue of old and outdated dams. The National Inventory of Dams (NID) from the US Army Corps of Engineers counts 91,500 dams in the United States with an average age of 57 years. Some of the dams continue to serve useful purposes: carbon-free power generation, flood protection, drinking water supply, irrigation, creating bodies of water for recreation, and so on. But many others are both no longer useful and  "high-hazard," meaning that there is risk to human life if/when they fail. For these dams, removal will often be a better option. Margaret A. Walls and Vincent Gonzales provide a readable overview of the work in "Dismantling Dams Can Help Address US Infrastructure Problems" (Resources, October 2020). For more details, their longer report is "Dams and Dam Removals in the United States" (RFF Report 20-12, October 2020).

The National Inventory of Dams tries to include all dams in the US that meet "at least one of the following criteria:
These are the relatively big dams. A fuller count of smaller dams from a couple of decades ago suggests that there might be 2.5 million dams in the US as a whole.
The Stanford National Performance of Dams Program also provides useful background information. As their 2018 report on "Dam Failures in the U.S." points out, there was a major surge in dam-building after World War II, which has then slowed to nearly a halt in the last couple of decades. 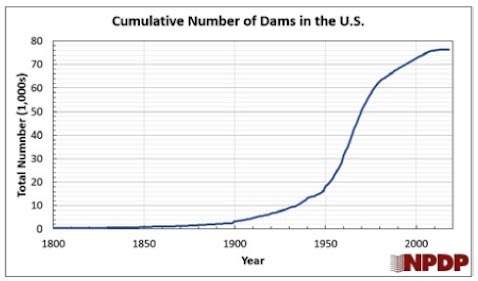 The Walls and Gonzales report digs into the data from the National Inventory of Dams and reports:

[A] hazard rating is a classification that conveys the consequences should the dam fail or be operated improperly and release water. It is highly dependent on the location of the dam—that is, whether it is located near heavily populated areas—and the size of the reservoir. Seventeen percent of dams in the NID have a high hazard rating, 12 percent are rated as a significant hazard, 65 percent are considered a low hazard, and 5 percent have an undetermined hazard rating. Of the high-hazard dams, private entities own the largest share, at 43 percent. Comparing this with private ownership of dams as a whole, however, which is 62 percent, private entities appear to have fewer of the high-hazard dams than do other owner types. Local governments, for example, own 20 percent of all dams but 29 percent of high-hazard dams, and the federal government owns only 4 percent of all dams but 9 percent of high-hazard dams.

As they point out, removing dams can both reduce the risks of a collapse, and also offer other potential benefits:

Removing an obsolete or deteriorating dam can often be a better option than repairing it. In many cases, removal is less costly than repair, and if the dam no longer provides services of sufficient value, spending money on repairs makes little sense.

Removing a dam can have many environmental benefits. Dam removal restores a river’s natural function, improving water quality and conditions for aquatic habitat by increasing flows and reducing water temperatures, and provides passage to and from the ocean for anadromous fish species such as salmon. ...

The removals have ranged from very small dams, such as the 81 dams removed from the Cleveland National Forest in Southern California, to large dams with removal costs in the tens of millions of dollars, such as the 106-foot-tall San Clemente Dam in California and the Elwha and Glines Canyon Dams in Washington. On the East Coast, removals of dams such as the Edwards Dam on the Kennebec River in Maine and the Embrey Dam on Virginia’s Rappahannock River have benefited oceangoing species such as American shad, alewife, blueback herring, and American eel (a catadromous species that lives in freshwater and returns to the ocean to breed).

Dam removal also can create new river recreation opportunities by providing unimpeded boat passage and restoring whitewater conditions. The removal of three dams on the Cuyahoga River in Ohio was motivated by concerns over water quality, but removing the dams actually spurred growth in the local outdoor recreation economy by producing Class 5 rapids in downtown Cuyahoga Falls. The final dam slated to come down on the Cuyahoga River, the 60-foot-tall Gorge Dam, is expected to reveal a buried 200-foot natural waterfall.

The removal of certain kinds of dams can improve river safety. Low-head (or “run-of-the-river”) dams, which lie across the width of a river or stream and typically form only a minimal reservoir, create underwater circulating hydraulics that have caused hundreds of drowning deaths. After six deaths in one summer at low-head dams in Iowa, the state launched the Water Trails and Low-head Dam Mitigation Program, which focuses on removing and reengineering low-head dams around the state while providing canoe and kayak trails to enhance river recreation.

Despite these success stories, as of January 2020, only an estimated 1,700 dams have been removed in the United States. Numbers are on the rise—nearly half of the removals have taken place in the last ten years—but are low relative to the total number of dams. Moreover, a mere five states account for half of all removals: Pennsylvania (343), California (173), Wisconsin (141), Michigan (94), and Ohio (82).

There are lots of reasons for why outdated and high-hazard dams aren't removed. There's an up-front cost. Those who would benefit from the dam removal may not even know that they would do so. The regulators who in theory are overseeing the dams are stretched thin. Margaret Walls discusses these issues and how they have been overcome in various states in "Aligning Dam Removal and Dam Safety: Comparing Policies and Institutions across States" (RFF Report 20-13, October 2020).

Older, outdated, and high-hazard dams are situation where the most useful infrastructure spending can involve removal, not rebuilding.
Posted by Timothy Taylor at 11:47 AM