Where Does Increased Revenue from Men's College Football and Basketball Go?

College sports can be readily divided into two groups: in one group, sports are an extracurricular activity mainly subsidized by the institution; in the other group, the big-revenue sports of football and men's basketball generate large and revenues far beyond the existing costs of those programs--which is money that can be spent in other ways. Craig Garthwaite, Jordan Keener, Matthew J. Notowidigdo and Nicole F. Ozminkowski examine these issues in "Who Profits From Amateurism? Rent-Sharing in Modern College Sports" (NBER Working Paper #27734, October 2020, subscription required, but a readable summary is here). 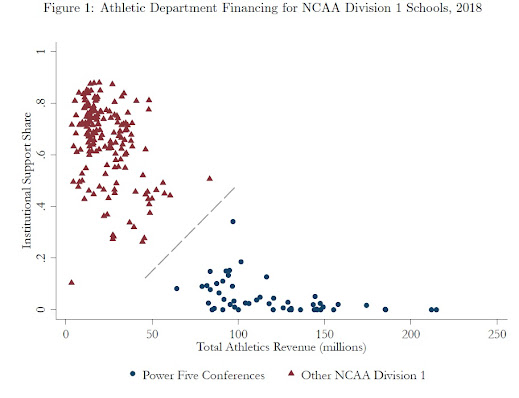 The blue circles are the so-called "Power 5" schools--that is, schools in the Atlantic Coast Conference, Big Ten Conference, Big-12 Conference, Pac-12 Conference, and Southeastern Conference. It's worth noticing that even for the blue circle schools, most of their athletic departments receive institutional support--that is, the overall flow of funds is from the unversity to the athletic department, not from the athletic department to the rest of the university.
Here are some patterns for the average "Power 5" school from 2005 to 2018.  The figure shows "net revenues" for each sport--that is, revenues minus costs.  Net revenues football have more than doubled, and net revenues from men's basketball--although much lower--have risen as well. Meanwhile, net revenue from other men's sports and from women's sports is negative and falling. To put it another way, some but not all of the gains in revenues from football and men's basketball are paying for the reduction in net revenues in the other sports. 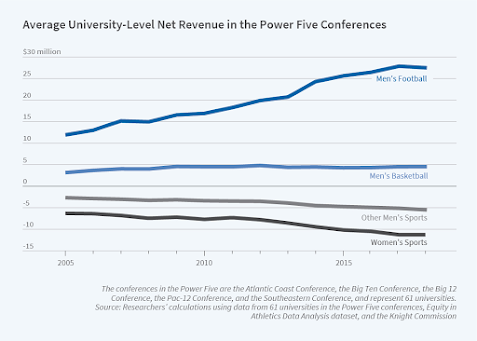 Garthwaite, Keener, Notowidigdo and Ozminkowski carry out various calculations. One shows that of the total revenue received by football and men's basketball, the players receive about 7 percent. For comparison, pro athletes in several sports negotiate for about 50% of total revenue.

The authors also estimate what happens to an extra $1 of revenue raised by men's football and basketball: for example, about 31 cents of every additional $1 of revenue is reinvested in the football and basketball programs--not directly given to the players, but instead going to facilities, along with salaries of coaches and administrators. About 11 cents of every additional $1 from the big-revenue sports goes to the other sports. Although in theory it would be possible that some of the additional funds from big-revenue sports could be funneled back to the rest of the university, in practice this doesn't seem to happen.

The authors also do some illustrative calculations about paying college athletes in the big-money sports, but of course, such calculations depend on what kinds of contracts would be allowed or disallowed, and whether public support would be the same for college sports if the teams were the result of a bidding war over high school athletes. I won't try to dig into those issues here. But I will note that if college football and men's basketball players were to receive, say, half of all the revenues they generate rather than the current 7 percent, something else in this ecosystem of college athletics will have to give way.

Posted by Timothy Taylor at 2:20 PM