How Cities Stopped Being Ladders of Opportunity

One of the archetypal stories of the American experience involves the person who moves from a rural area or a smaller metro area to a big city, and after starting off in a humble role and having some ups and downs, becomes a big success. But the role of cities as ladders of opportunity have changed dramatically in the last few decades. David Autor tells the story in "The Faltering Escalator of Urban Opportunity" (appearing as a chapter in Securing Our Economic Future, edited by Melissa S. Kearney and Amy Ganz, and published by the Aspen Institute Economic Strategy Group late last year). Autor begins:

For much of modern U.S. history, workers were drawn to cities by opportunities for the more enriching work offered there and the higher pay that came with it. As the eminent urban economist Edward L. Glaeser observed, “...cities have been an escape route for the underemployed residents of rural areas, such as the African-Americans who fled north during the Great Migration” (Glaeser 2020). But an important aspect of this opportunity escalator has broken down in recent decades. The migration of less-educated and lower-income individuals and families toward high-wage cities has reversed course (Ganong and Shoag 2017): Since 1980, college-educated workers have been steadily moving into affluent cities while non-college workers have been moving out.

The theories about the reasons for this shift can be divided into "push" or "pull" categories. One set of theories is that those with less education are being  pushed from large cities--perhaps by very high housing costs. The other set of theories, which Autor emphasizes, is that the pull of labor market opportunities for lower-skilled workers has diminished sharply in big urban areas.

In the initial decades following WWII, U.S. cities offered a distinctive skills and earnings escalator to less-educated workers. A likely reason why is that, in these decades, adults without college degrees performed higher-skilled, more specialized jobs in cities than their non-urban counterparts. Laboring in urban factories and offices, they staffed middle-skill, middle-pay production, clerical, and administrative roles, where they worked in close collaboration with highly educated professionals (e.g., engineers, executives, attorneys, actuaries, etc.). These collaborative working relationships often demanded specific skills and shared expertise, and likely contributed to the higher wages (and higher productivity) of urban non-college workers. These jobs were comparatively scarce in suburbs and rural areas, far away from the office towers and (at one time) bustling urban production centers. Urban labor markets accordingly provided an escalator of opportunity and upward mobility for immigrants, minorities, less-affluent, and less-educated workers.

In the decades since 1980, however, this distinctive feature of urban labor markets has diminished. As rising automation and international trade have encroached on employment in urban production, administrative support, and clerical work, the noncollege urban occupational skill gradient has diminished and ultimately disappeared. While urban residents are on average substantially more educated—and their jobs vastly more skill-intensive—than four decades ago, non-college workers in U.S. cities perform substantially less specialized and more skill-intensive work than they did decades earlier. Polarization thus reflects an unwinding of the distinctive structure of work for non-college adults in dense cities and metro areas relative to suburban and rural areas. And as this distinctive occupational structure has receded, so has the formerly robust urban wage premium paid to non-college workers. 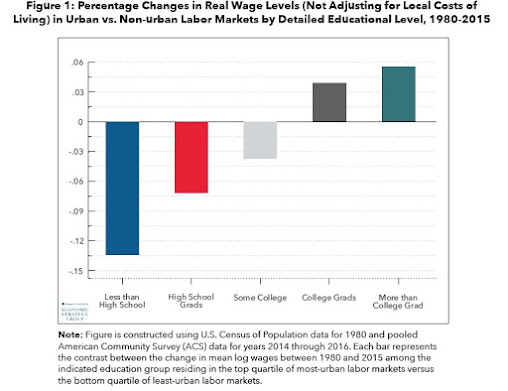 The aftereffects of the pandemic are likely to strengthen this pattern. Autor writes:

The COVID-19 crisis may change this trajectory. It seems probable that employers will learn two durable lessons from the swift, disruptive, and yet surprisingly successful movement of knowledge work from in-person to online: a first is that online meetings are almost as good as—and much cheaper than—time-consuming, resource-intensive business trips; a second is that virtual workplaces can provide a productive, cost-effective alternative to expensive urban offices for a meaningful subset of workers. If these lessons take root, they will shift norms around business travel and remote work, with profound consequences for the structure of urban labor demand. Already, U.S. employers surveyed during the current pandemic project that the share of working days delivered from home will triple after the pandemic has passed (Altig et al. 2020). Most significantly, the demand for non-college workers in the urban hospitality sector (i.e., air travel, ground transportation, hotels, restaurants) and in urban business services (i.e., cleaning, security, maintenance, repair, and construction) will not likely recover to its previous trajectory.

When I think about the role of cities as ladders of opportunity, I find myself thinking about back-and-forth movements--that is, not just rural and smaller cities to big metro areas, but also the moves from big cities back to smaller ones. I can't point to systematic data to back this up, but my sense is that the economic role of US cities for many decades was that they were a hub for economic activity that reached out to smaller cities that were within perhaps 100-200 miles. Supply chains and also movements of people went back and forth along these urban hub-and-spoke connections.
But in the last few decades, big cities seem to have lost some of their connectedness to the areas around them. Instead of having a manufacturing plant or a back-office operation in a location within a few hours drive from the city, that manufacturing plant or back-office operation may be in another country on another continent. For many economic purposes US cities now operate in global competition with other large cities around the world. It will be interesting to see if the post-pandemic shifts in urban labor markets include a shift of some high-skilled labor back to smaller cities and rural areas as well.
Posted by Timothy Taylor at 3:09 PM