Will Population Fall for Many Countries--and the World?

During my adult life, the main arguments about global population typically revolved around the topic of whether growth in population would overwhelm natural resources and lead to mass starvation and environmental collapse, or whether growth in population would be accompanied by technological progress in a way that would lead to a generally rising standard of living. Although the dire predictions of overpopulation from the 1960s and 1970s have not materialized on schedule, those concerned about overpopulation could always argue that even if the doomsday predictions were premature or delayed, they were nonetheless on their way.

However, both sides of this controversy started from an assumption that population levels would continue to rise. In the 21st century, this assumption may be proven false. 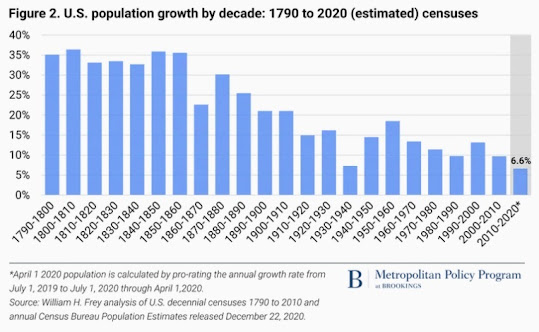 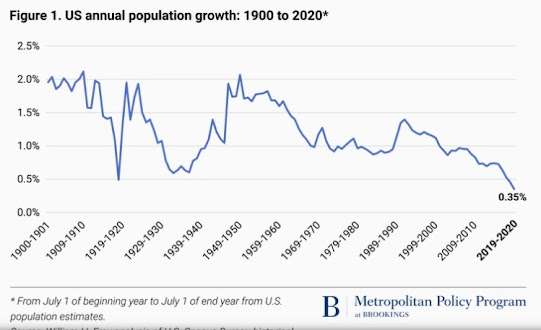 The US pattern is reasonably representative of the world as a whole: that is, population growths is faster in some countries and slower in others. In Japan, Russia, and Spain, for example, total population has already peaked in the last few years and how has started to decline. For an look at projected global population growth, a group of 24 demographers published a "Fertility, mortality, migration, and population scenarios for 195 countries and territories from 2017 to 2100: a forecasting analysis for the Global Burden of Disease Study (The Lancet, October 17, 2020, pp. 1285-1306).  Here's a flavor of their results (for readability, I've deleted footnotes and parenthetical references to statistical confidence intervals):

Our reference scenario, based on robust statistical models of fertility, mortality, and migration, suggested that global population will peak in 2064 at 9·73 billion and then decline to 8·79 billion (6·in 2100 ...

Responding to sustained low fertility is likely to become an overriding policy concern in many nations given the economic, social, environmental, and geopolitical consequences of low birth rates. A decline in total world population in the latter half of the century is potentially good news for the global environment. Fewer people on the planet in every year between now and 2100 than the number forecasted by the UNPD would mean less carbon emission, less stress on global food systems, and less likelihood of transgressing planetary boundaries. ...

Although good for the environment, population decline and associated shifts in age structure in many nations might have other profound and often negative consequences. In 23 countries, including Japan, Thailand, Spain, and Ukraine, populations are expected to decline by 50% or more. Another 34 countries will probably decline by 25–50%, including China, with a forecasted 48·0% decline.

When confronted with predictions that are decades in the future, it's of course important to note that they rely on underlying estimates about fertility and longevity, which in turn rely on estimates about factors like education levels and use of contraception. Perhaps there will be a new global baby boom that will surprise the demographers. But it's also important to note that much of the future population has already been born. For example, those who will be 40 or older by the year 2061 are already born right now. A sizeable share of those born in the last few years will live to see 2100. Thus, it's worth some thought as to where we seem to be headed.

One obvious shift is that countries around the world will be much more focused on the elderly, because the elderly will be a much large share of the population. The demographers writing in the Lancet note:

In 2100, if labour force participation by age and sex does not change, the ratio of the non-working adult population to the working population might reach 1·16 globally, up from 0·80 in 2017. This ratio implies that, at the global level, each person working would have to support, through taxation and intra-family income transfers, 1·16 non-working individuals aged 15 years or older (the working age population is defined by the International Labour Organization as those aged 15 years or older).41 Moreover, the number of countries with a dependency ratio higher than 1 is expected to increase from 59 in 2017 to 145 in 2100. Taxation rates required to sustain national health insurance and social security programmes might be so large as to further reduce economic growth and investment. Insecurity from the risk that these programmes could fail might generate considerable political stress in societies with this demographic contraction ...

When thinking of these challenges, one's mind immediately turns to financing of government programs that support the elderly, like Social Security and Medicare in the United States, but that's only the beginning. For example, the US and other countries are going to face an enormous challenge in financing and providing long-term care options for the elderly. There are also likely to be hard-to-predict effects on the rate of economic growth:

Having fewer individuals between the ages of 15 and 64 years might, however, have larger effects on GDP growth than what we have captured here. For example, having fewer individuals in these age groups might reduce innovation in economies, and fewer workers in general might reduce domestic markets for consumer goods, because many retirees are less likely to purchase consumer durables than middle aged and young adults. Developments such as advancements in robotics could substantially change the trajectory of GDP per working-age adult, reducing the effect of the age structure on GDP growth. However, these effects are very difficult to model at this stage. Furthermore, the impact of robotics might have complex effects on countries for which the trajectory for economic growth might be through low-cost labour supply.

These population shifts will alter perspectives on the magnitude of of countries around the world, too. For example, China is the now the most populous country in the world with a population of 1,412 million in 2017. However, China took dramatic steps to reduce fertility back in the early 1970s, later culminating in the "one-child" policy. Thus, the forecast is for China's population to peak in 2024 at 1,431 billion, and then fall by nearly half to 731 million in 2100.

The decline in fertility for India started later. India's population is 1,380 million in 2017, but it will overtake China in the next few years, before peaking in these projections at 1,605 million in 2048--and then falling back to 1,093 million by 2100.

Meanwhile, the fertility decline has barely started in Nigeria. Thus, Nigeria's current population of 206 million is forecast to rise continually through the rest of this century, and by 2100 the 790 million Nigerians would outnumber the population of China.

Posted by Timothy Taylor at 1:52 PM