Interest rates have been declining for several decades, both in the US economy and around the world. Why has this happened, what problems is it causing, and what monetary and fiscal policy responses might be appropriate? Elga Bartsch, Agnès Bénassy-Quéré, Giancarlo Corsetti and Xavier Debrun tackle many of these issues in "It's All in the Mix: How Monetary and Fiscal Policies Can Work or Fail Together" (December 2020, Geneva Reports on the World Economy 23).
As a starting point, here are a few examples of falling interest rates. The first figure shows the interest rate for borrowing money for a 30-year fixed-rate mortgage in the US. 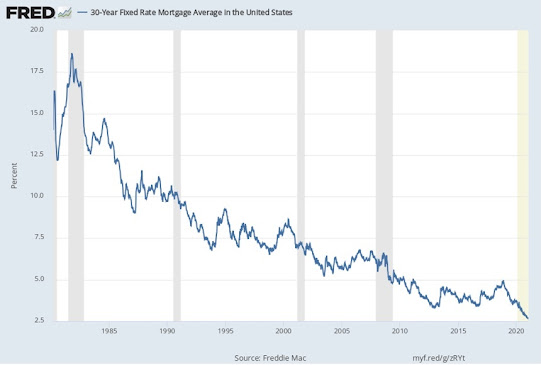 This figure shows the "federal funds" interest rate, which is the interest rate targeted by the US Federal Reserve when it conducts monetary policy. 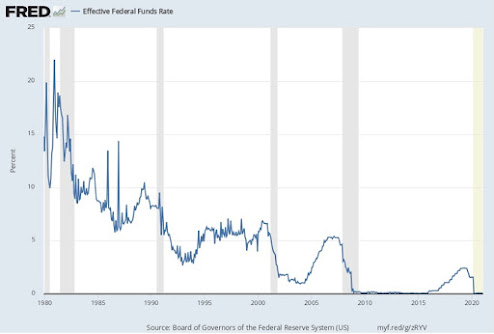 As a third example, more theoretical but more conceptually accurate than the first two, consider the interest rate that economists call R*. As Bartsch, Bénassy-Quéré, Corsetti and Debrun explain:

R* is the real rate of interest that, averaged over the business cycle, balances the supply
and demand of loanable funds, while keeping aggregate demand in line with potential
output to prevent undue inflationary or deflationary pressure. Two key features of R* are
that it is (i) expressed in real terms (i.e., excluding inflation) and (ii) not subject to credit
risk. Hence R* is meant to capture the equilibrium (real) rate of return of a safe asset. 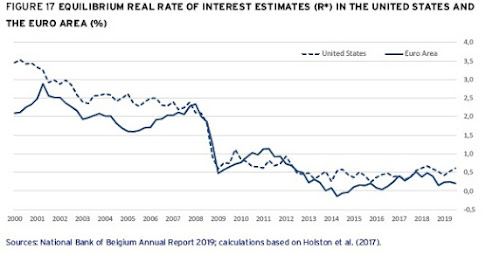 Again, the R* interest rate is a real interest rate, stripping out any effects of inflation, and also a risk-free rate, stripping out risk of defaulting on loans. So what makes it decline? As usual for economists, the standard answer involves supply and demand: specifically, the global supply of savings has risen, and this higher supply of saving has not been matched by a concomitant rise  in investment demand for saved funds. The authors write:

More generally, however, an abnormally low R* is first and foremost a sign of economic malaise and imbalances ... Consensus explanations point to factors that simultaneously and inefficiently push global savings up and global investment down. Some of these factors are slow-moving and predictable. This is the case of accelerating population ageing in the West and in East Asia (China, Japan, South Korea). As individuals approach retirement age, higher wage income and the prospect of lower pension payments encourage them to save more to smooth their living standards over their remaining lifetime.
Yet, the issue is why these extra savings do not find their way into investment. After all, the effects of ageing on investment are not necessarily negative on balance. While the anticipation of shrinking markets in large economies is undoubtedly a drag on investment plans, a relative fall in the working-age population could be expected to raise the return on capital. In addition, a larger elderly population could entail reallocations of productive capacity, fostering innovation and, ultimately, investment as the aggregate consumption basket changes in favour of goods and services intended to alleviate the consequences of dependency. For instance, the return on investment in robotics, telemedicine and other innovative options to deal with dependency could be expected to rise. What prevents these arguably desirable developments from moving faster and on a greater scale?

Other slow-moving but less easily predictable factors include the significant rise in income inequality in many countries, the slowdown in trend productivity growth and an increase in market concentration. Greater income inequality is generally thought to raise aggregate saving as the income share of more affluent households – who tend to save relatively more – increases. Weaker productivity gains and greater market power could both contribute to lower private investment and boost corporate savings, resulting in sizable stock buybacks and purchases of low-risk financial assets, such as sovereign bonds from reserve currency issuers. And in fact, the corporate savings glut is an essential part of the story.

For borrowers, like those who are buying a house (or refinancing an existing mortgage) or for the government running large budget deficits, these ultra-low low interest rates seem like a real benefit. Why might one be concerned about them as a problem, or at the authors put it, "a sign of economic malaise and imbalances"? There are a number of concerns, some more fundamental than others.
One practical problem is that investors who had been relying on interest rates at more normal levels, like insurance companies or pension funds, have experiences lower-than-expected returns, which in turn affects their ability to meet their commitments.

A more fundamental problem is that as one looks around the world, it certainly seems as if there are plentiful opportunities for productive investment. The world is full of poverty and low consumption levels, together with low levels of health and education, environmental concerns, aging populations, and many other issues. There are also waves of new technologies, including not just digital technologies but scientific breakthroughs in biology, materials science, and many other areas. However, the high levels of global savings are not translating into a surge of global investment. This suggests something is wrong with the economic environment at a deeper level, perhaps with the financial system, or with maybe with issues like taxes, regulation, trade, or how scientific breakthroughs are being translated (or not translated) into consumer products.
Instead, we seem to be in a global economy where low interest rates lead to situations of high borrowing and funds flowing into financial assets like real estate or stock markets. These high levels of borrowing create a risk that when a negative economic event occurs, it will propagate through the financial system in a way that leads to bigger problems or widespread recession. The report notes (italic type in original):

After the Global Financial Crisis, advanced economies had to come to terms with their vulnerability to the kind of economic and financial instability usually confined to some chronically unstable emerging and developing economies. ... As in emerging and developing countries, the events that bring about instability are not necessarily low-probability, high-impact shocks, such as devastating earthquakes or deadly pandemics. They can also be (and usually are) the result of a vicious circle of negative feedback loops, which allow even a seemingly benign disturbance to quickly escalate into ‘tail events’. Bernanke (2013, pp. 71-72) explains this when he recalls that ahead of the GFC,

“… if you took all the subprime mortgages in the United States and put them all together and assume they were all worthless, the total losses to the financial system will be about the size of one bad day at the stock market, they just weren’t that big.”

Taken in isolation, a root disturbance of the size of a bad day in a given segment of financial markets would likely not be enough to instantly alarm policymakers and push them to act ... Hence, when things unexpectedly get out of control, policymakers can be caught unprepared and unable to respond as quickly and effectively as possible with the right mix of instruments. Whatever their root causes, the endogenous vicious circles that define tail risk are mostly financial.

Thus, we have been living for some years now in an economy where, by conventional measures, the government is making large efforts to stimulate the economy with low interest rates and high budget deficits. But interest rates remain low. Borrowing stays high. The risks of smaller economic shocks being magnified into bigger shocks remains. The unemployment rate is sometimes lower or higher, but productivity doesn't rise. With each recession, we rely on ever-larger budget deficits and ever-more-creative monetary policies like emergency lending funds and quantitative easing. The Federal Reserve has become more focused on acting as an arm of the US Treasury, and helping to finance government debt, rather than acting as an independent agency. We seem unable to return to a more "normal" economy.
Bartsch, Bénassy-Quéré, Corsetti and Debrun emphasize that this issue is global, because supply and demand for capital is a global market. Thus, they suggest a coordinated global response: for example, one can imagine a situation  in which countries around the world increase their deficit spending with two main purposes in mind. One goal would be to provide improved social insurance so that people have less reason to save. Another goal would be to make a range of public investments in infrastructure, R&D, technology centers, and human capital, which would both raise investment directly and also (one hopes) provide an improved investment climate for firms.  Taken together perhaps supportive actiosn on tax, trade, and regulatory issued, one can imagine a shift to less global saving (especially by firms) and to more global investment.
But of course, the political economy behind these policy choices are not straightforward. The US government, for example, has been shifting for years toward an emphasis on writing checks either to individuals or on behalf of individuals (say, via Medicare and Medicaid) and away from investment spending. The 2020 election campaign was not focused on building public support for a shift to more investment-focused federal spending.
It's also true that even if the issue of low interest rates is global, the policy responses would still be taken on a national basis. For example, one can imagine that if the US was to enact a substantial long-run increase in deficit spending, given that the US domestic savings rate is already fairly low, the US economy will need to rely on very large inflows of international financial capital and will be running very large trade deficits. This policy mix has political and economic tradeoffs of its own.
Finally, as the authors emphasize, the idea of running large government budget deficits for a time all over the world, and then turning off the spigot when interest rates return to more normal levels, poses some obvious issues of implementation.
Ultra-low interest rates are central to the macroeconomic challenges of our time. They are a main way in which conventional macroeconomic wisdom about monetary and fiscal policy from as recently as 15-20 years ago doesn't apply nearly as well in the present.
Posted by Timothy Taylor at 1:07 PM