The Transition to Transfer Payment Government

Government in the United States, especially at the federal level, has become more about transfer payments and less about provision of goods and services.

Here a figure showing government transfer payments to individuals--everything from Social Security and Medicare/Medicaid to welfare payments of various kinds--as a share of GDP. The pattern is bumpy, but the overall upward rise in the last half-century from 5% of GDP back in the 1960s to about 15% of GDP in the last few years is clear. The lower blue line shows transfer payments to individuals from just the federal government. (The figure is created using the ever-helpful FRED website from the Federal Reserve Bank of St. Louis.) 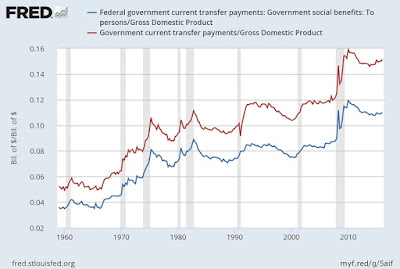 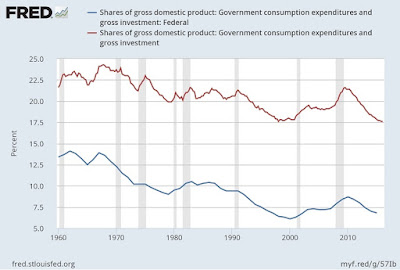 The political economy of such a shift is simple enough: programs that send money to lots of people tend to be popular. But I would hypothesize that this ongoing shift not only reflects voter preferences, but also affect how Americans tend to perceive the main purposes of the federal government. Many Americans have become more inclined to think of federal budget policy not in terms of goods or services or investments that it might perform, but in terms of programs that send out checks.

For those who are interested, one way of measuring gross domestic product is to add up the sources of demand in the economy: consumption plus investment plus government plus exports minus imports. In this formula for GDP, the "government" category includes only "government consumption expenditures and gross investment," as explained here by the US Bureau of Economic Analysis.  In contrast, transfer payments become income to those who receive them, and thus are counted in GDP when the recipients spend the money to consume a good or service.