The US Department of Education is starting this summer to release detailed results from a survey effort called  Civil Rights Data Collection, which collected an array of data from almost every public school in the country for the 2013-14 school year. One result is a short e-report on "Chronic Absenteeism in the Nation's Schools." The report defines "chronic absenteeism" as missing at least 15 school days in a given year. Nationally, about one in eight students are chronically absent. But for non-white, non-Asian high school students, the average rates of chronic absenteeism are above 20 percent. Here's a figure showing rates of chronic absenteeism by race/ethnicity and by level of school. 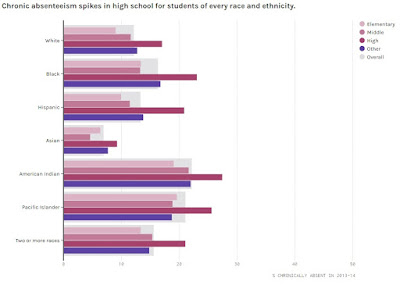 Chronic absenteeism is not surprisingly associated with lower school performance, both for the individual student and for schools where these rates are especially high. Of course, this correlation doesn't mean that being absent, by itself, is the main causal factor. One suspects that students and schools with high rates of chronic absenteeism face a lot of other issues, and that absenteeism is a symptom of those broader issues. In that sense, chronic student absenteeism is a marker for a set of problems that K-12 schools face, where the school itself can't directly do much about the underlying causes of many of those problems.