State and local financial support for higher education is falling, and the share of costs covered by student tuition is rising. Perhaps not coincidentally the number of students enrolled in US public higher education is has fallen in the last few years. That's the evidence from the State Higher Education Executive Officers Association in it annual report, State Higher Education Finance 2015, released in April

The report notes: "In 2015, states invested $81.8 billion in higher education ... Local governments invested $9.1 billion from property tax revenue in 2015 primarily for local district community colleges." Here are some estimates over the last quarter-century, from 1990 to 2015, about the contributions of state and local spending on a per-student basis. The dollar figures are adjusted for inflation, so back in the early 1990s state and local spending on higher education was about $8,500 per student, but from 2011-2015 (despite a bump up in the last few years) it has been under $7,000 per student. Meanwhile, average tuition paid per student has more than doubled, from less than $3,000 back in the early 1990s to over $6,000 in 2015. 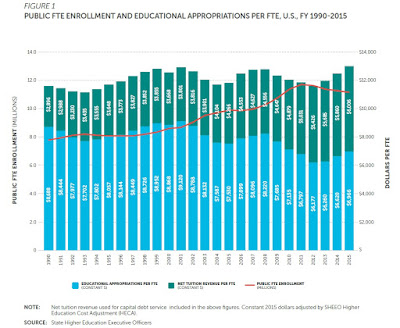 Putting those two trends together, it's no surprise that the share of public higher spending covered by tuition is rising. Indeed, this figure shows that the share has nearly doubled, from 25% back in 1990 to approaching 50% at present. The report discerns a pattern here: "Net tuition revenue per student tends to increase most rapidly during periods of recession, shifting more of the cost of higher education to students and families. ... During economic recessions, student share increases quickly and a new level is established during periods of recovery. Traditionally, the student share has not
declined significantly as state and local funding has been restored. It is likely that student share will surpass 50 percent during the next economic downturn." 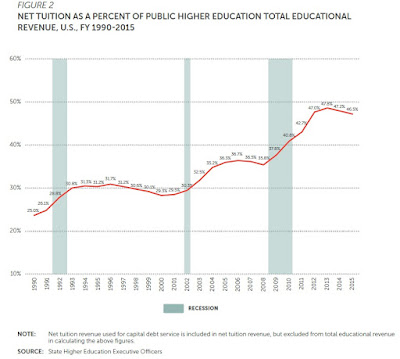 Of course, rising student loans have helped students to pay the higher tuition during the past 25 years. But student loans now total $1.3 trillion, and the dip in higher education enrollments in the last few years (shown by the red line in the first figure) suggests that ever-higher tuition and loans are not the way to expand the effectiveness and enrollments in higher education.